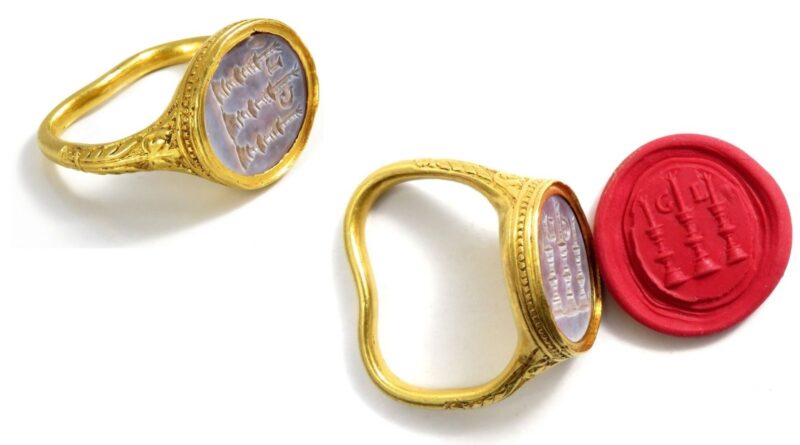 A spectacular 400-year-old gold seal ring found by a metal detectorist in the Peak District could sell for tens of thousands of pounds at auction.

The discovery was made by a 64-year-old retired fishmonger from North Derbyshire in the grounds of Castern Hall, a Grade II listed manor house, also known as Casterne, near Ilam in Staffordshire’s Manifold Valley.

The high carat gold ring, which is set with a purple-blue Chalcedony gemstone carved with the initials ‘GL’ and three candles, dates back to circa 1600-1650. It is due to be sold in Hansons Auctioneers’ February 25-26 Historica Auction with an estimate of £25,000-£30,000.

The finder, who has been metal detecting for more than 40 years, said: “This is the best and most important find I’ve ever made. I got a strong signal and started digging down but hit a large, round flat stone. When I lifted it up, I found the mammoth gemstone.

“I discovered it three years ago in February 2018 and it’s been at the British Museum for most of the time since. It would have been made for an extremely wealthy and sizeable man because the ring itself is unusually large.”

Castern Hall has been home to the Hurt family since the 16th century.  Current owner Charles Hurt said: “In 1671 my direct ancestors Nicholas Hurt and Elizabeth Lowe married, linking the estates of Castern and Alderwasley in Derbyshire. The Lowes and their ancestors had been given Alderwasley by the King in the 13th Century. So, one obvious candidate for the ‘L’ on the ring is Lowe.’

Family records have identified the ring’s owner as possibly being Geoffrey Lowe, who died in 1637. Geoffery was buried in the grounds of St Mary’s Church in Denby, Derbyshire. The church houses an impressive alabaster memorial to the Lowe family, who have been squires of the church since the 15th century.

Adam Staples, Hansons’ valuer and a renowned metal detectorist, said: “We suspect the ring may have been buried on purpose as it was found hidden under a large round stone, making it buried treasure, rather than a ring that simply fell off someone’s finger.

“One theory is that the ring was passed down to Elizabeth by her uncle John Lowe, who she nursed on his deathbed, and was hidden during a dispute over John’s will following his death in 1690. There are legends about buried treasure at Castern Hall and it could be that the ring was left there on purpose hundreds of years ago.

“The legends of buried treasure were sparked because vicious family disputes began to rage within minutes of the death of John Lowe. Elizabeth inherited the Alderwasley estate from John but had to fight her other uncles in court before she could live there. It’s thought the ring and other valuables were moved to Castern and hidden whilst the matter was being settled.

“The ring itself is an astonishing size. It’s too big for my thumb but may have been worn over a glove. I’ve done a huge amount of research, with help from the Hurt family, to try to work out who the ring belonged to. It’s a rather mysterious but wonderful find.”

The 17th-century seal ring is due to be sold on February 25 in Hansons’ Historica Auction. Any proceeds from the sale of the ring will be split between the landowner and the finder.