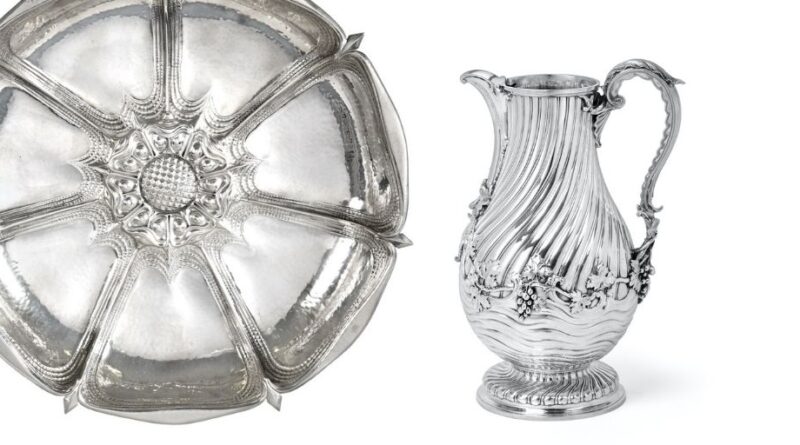 A fine example of the work of master silversmith Omar Ramsden is to be sold in Tennants Auctioneers’ Jewellery, Watches and Silver Sale on May 22 with an estimate of £5,000-£8,000.

The silver centrepiece-dish is made in the form of a stylised Tudor rose raised on ball and claw feet and was made in London in 1930. 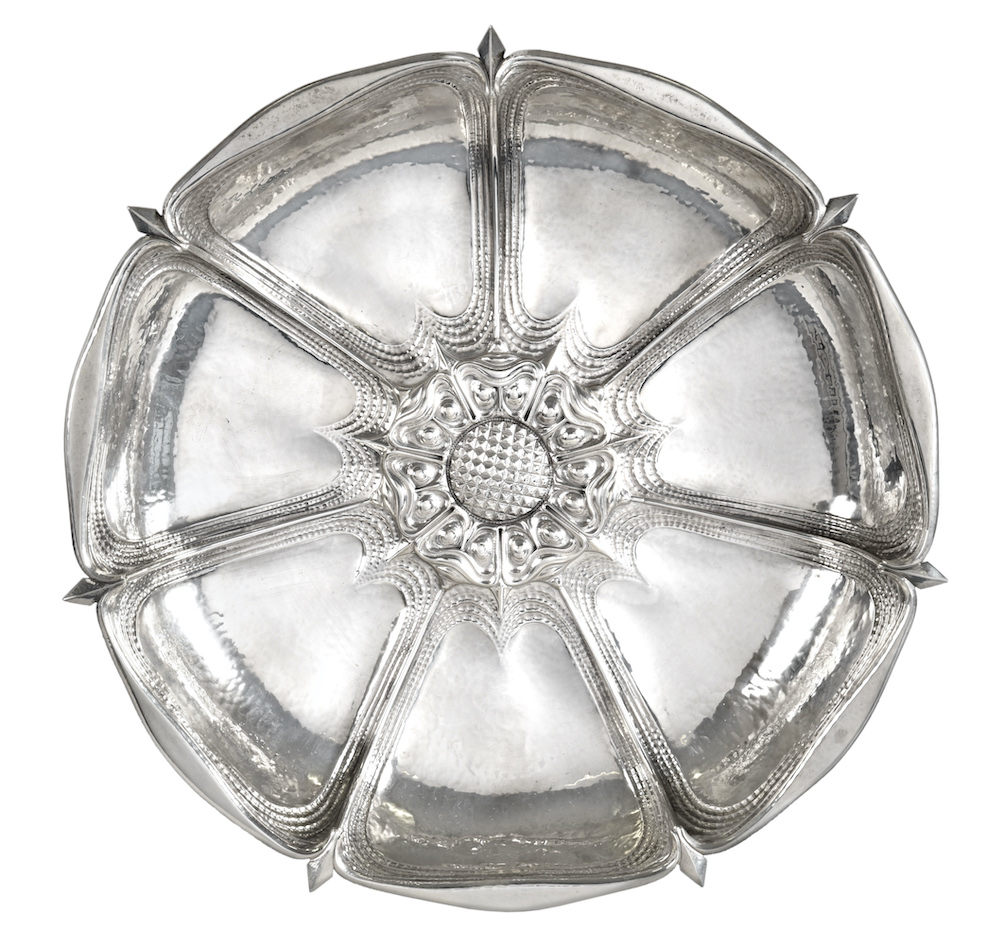 Omar Ramsden, who was born in Sheffield, is associated with some of the most imaginative silver produced in London in the early decades of the 20th century. Whilst entirely working in the Arts and Crafts tradition, Ramsden was inspired by traditional forms and motifs, reproducing them with his own unique interpretation. Amongst motifs that Ramsden was to revisit throughout his career was the Tudor rose, either faithfully depicted or stylised as in the present dish. The dish is one of the larger examples of his Tudor rose pieces, and it seems likely that it was inspired by a smaller dish hallmarked for 1922. This smaller version was then reproduced in 1925, an example of which was presented to the Victoria and Albert Museum by Queen Mary.

Elsewhere in the sale, a rare example of an identifiable 18th-century wine-jug is offered with an estimate of £3,000-£5,000. The George III Wine-Jug was made by Thomas Heming in London in 1765, and the pear-shaped jug is adorned with wave decoration to the lower body and spiral-fluting to the upper body, separated by a band of chased fruiting grapevines. Whilst the general shape most resembles a beer jug, the ornament clearly suggest that it was originally intended for wine. Wine-jugs were nearly indistinguishable from beer-jugs at this time, although other examples by Heming are known. Interestingly, Thomas Heming’s trade card from the 1760s to 1770s, a copy of which is held in the British Museum collection, depicts a jug which, whilst of a more baluster form, shows the same use of ornament as on the present example. 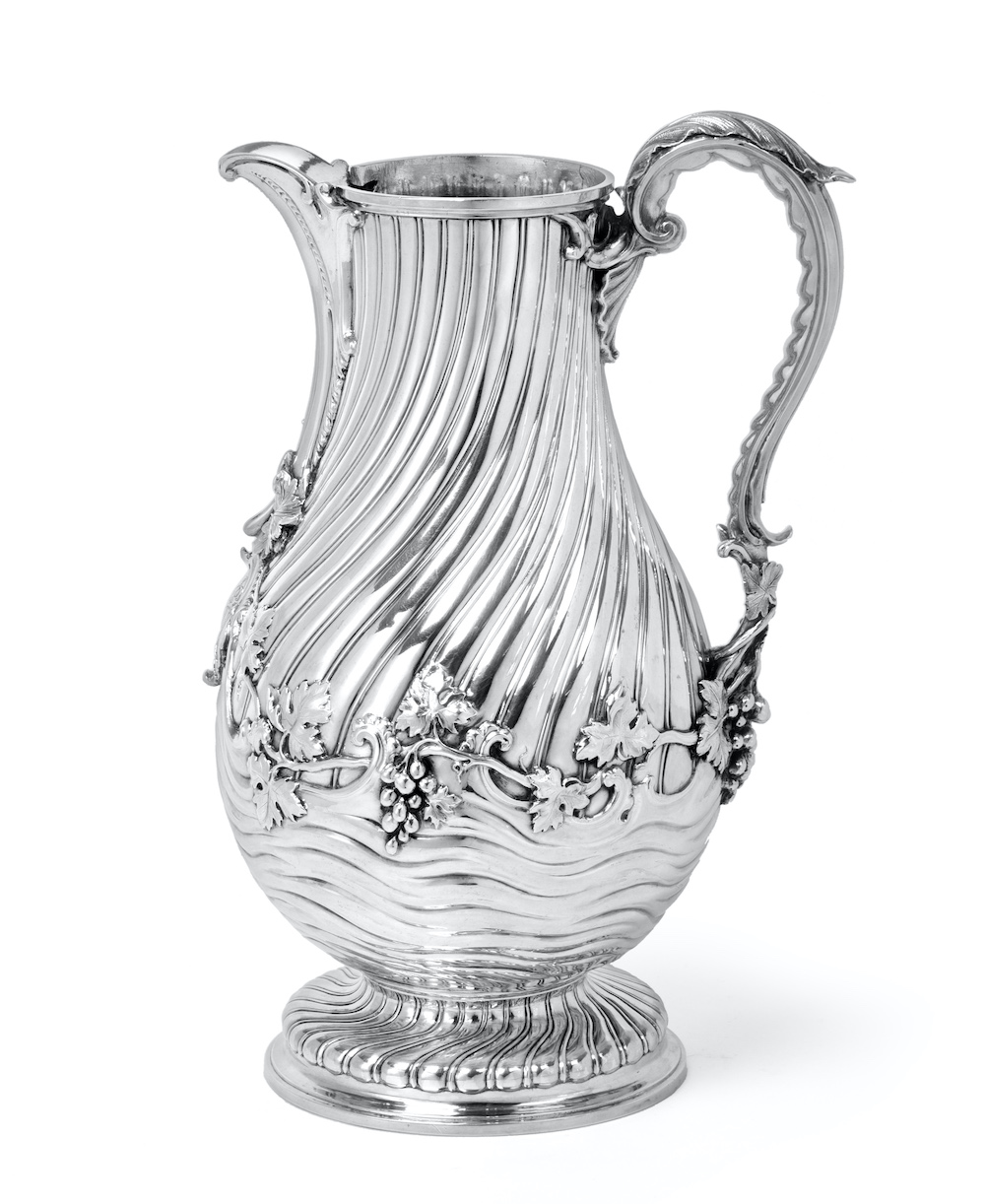 Although the early history of the jug is not entirely clear, there is a strong possibility that it was acquired by Charles William Grenfell M.P. (1823-1861), whose family owned Taplow Court in Buckinghamshire. He was known to have purchased items at auction, including at least three lots from the celebrated sale of the collection of the Duke of Buckingham and Chandos at Stowe House. The jug is thought to have been passed by descent to his grandson Captain Edward Arthur Aylmer D.S.C. (1892-1974) and then by descent to the present vendor.

Also of interest is a Louis XIV or Louis XV silver butterfield-dial or pocket sundial, estimated at £700-£1,000). The dial is signed ‘Butterfield a Paris’ and bears a further French mark which is almost certainly either the mark of Étienne Ridereau (Paris 1684-1687) or Étienne de Bouges, Charles Yvon, Armand Pillavoine and Charles Cordier (Paris 1717-1722). The bird-shaped gnomon (the part that casts the shadow) adjusts to different latitudes, and the back of the dial is engraved with the latitudes of twenty-eight European cities to help the traveller calibrate the dial to their current location for greater accuracy. Michael Butterfield (1635-1724) was a British instrument maker who moved to Paris in the 1660s, working for the French Royal Court and selling scientific instruments to the fashionable Parisians of the age. There are several similar but larger examples known, including one held in the collection of the Victoria and Albert Museum. 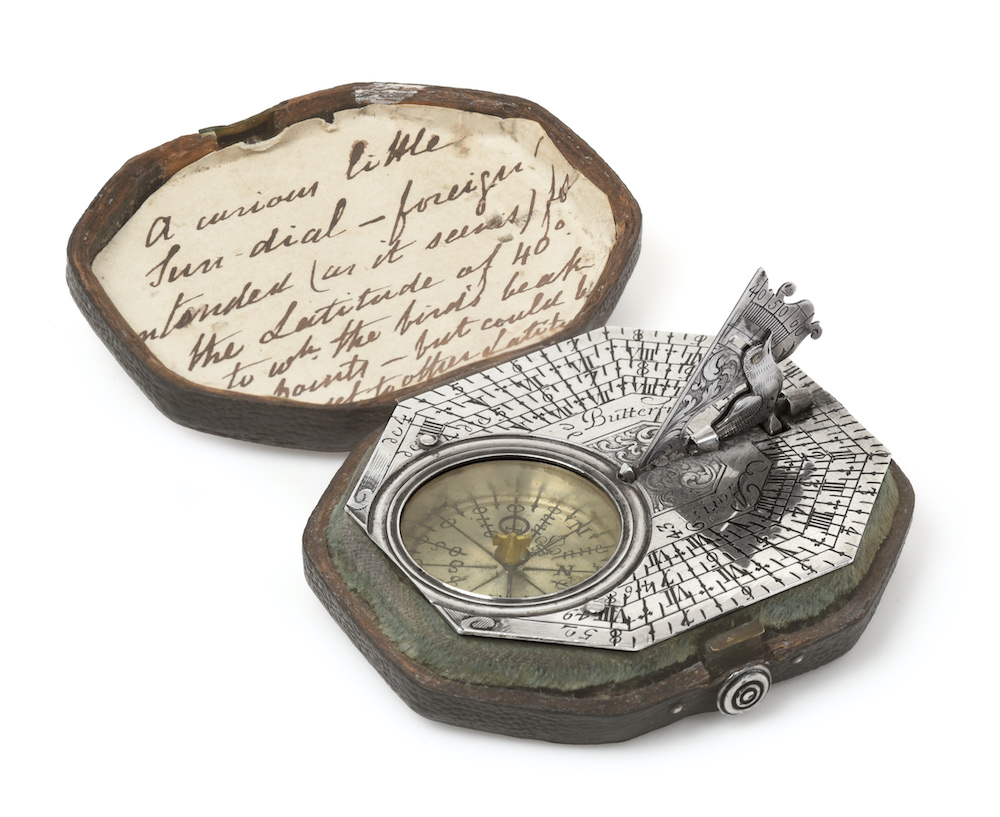 As with the wine-Jug, the butterfield dial was once in the collection of Captain Edward Arthur Aylmer D.C.S, a Royal Navy officer and first-class cricketer. A later manuscript note fitted into the cover of the case describes the dial as ‘A Curious little Sun-dial – foreign – intended (as it seems) for the Latitude of 40° to where the bird’s beak points – but could be set to other Latitudes’.

A private collection of place-card holders, mostly featuring sporting subjects is also on offer in the sale. Highlights of the collection include a cased set of four Edward VII silver and enamel place-card holders made by Sampson Morden and Co., Chester, 1904, estimated at £600-£900). The holders, which were retailed by Wilson and Gill of Regent Street, London, are decorated with circular enamel plaques depicting a capercaillie, a pheasant, a stag and a hare and are sold in their red leather fitted case.