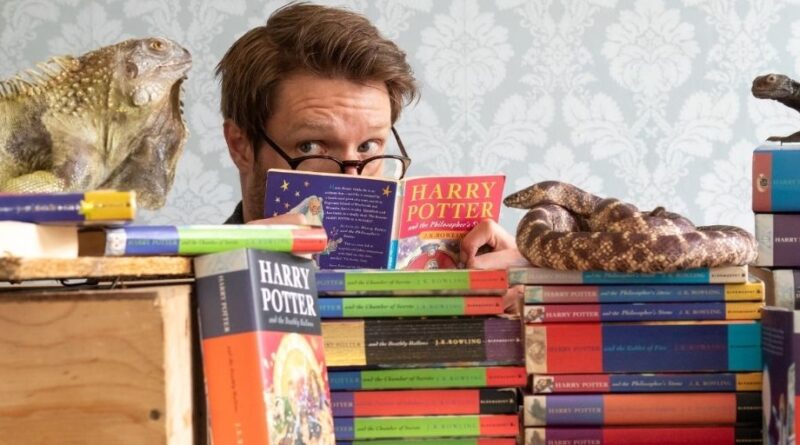 A Staffordshire auction house is to hold what it believes is the world’s first dedicated Harry Potter auction, featuring five rare first edition books and taxidermy snakes and lizards used in the first film.

Hansons Auctioneers hopes that the unusual sale will achieve total sales in excess of £250,000.

The May 5 event is being led by Jim Spencer, books expert at Hansons Auctioneers, who has enjoyed great success uncovering rare edition Harry Potter books in recent years. These have included eight hardback first issues of Harry Potter and the Philosopher’s Stone which have sold for between £17,500 and £68,000. Only 500 were printed in 1997 but the May sale includes five more – one purchased for only 50p. That means Jim has found 13 in total in 21 months.

Jim, associate director and head of books and works on paper at Hansons, said: “My head is spinning with rare Harry Potter books and memorabilia. For a couple of years now I’ve been responding to hundreds of enquiries every single week from all over the globe.

“Most of these enquiries fall short, so I’m letting people down gently throughout the day, every day. But it’s like panning for gold – I have to spot the glimmering specks among the grainy words or images coming through to my screen. Those nuggets of gold are all the more exciting when I find them!

“Parcels are arriving every day from all over the country, sometimes abroad. We collected books from five different vendors in Scotland. It’s all fresh to market, not trade. Sometimes, it arrives from one country and sells to another country. In the middle is me, inspecting and cataloguing books into the wee small hours. There’s a lot of work involved, but it’s an honour.”

Jim, dubbed a magnet for Harry Potter finds by the BBC, built his reputation after finding a first issue hardback of Harry Potter and the Philosopher’s Stone in July 2019. He said: “That book is regarded as the holy grail for collectors. The first copy I uncovered, a former Staffordshire library book bought for £1 at a table top sale, sold for £28,500.

“The first issue hardback of Harry Potter and the Philosopher’s Stone, published by Bloomsbury in 1997, marks the beginning of the Harry Potter phenomenon. Of the 500 copies printed, 300 were sent to schools and libraries and 200 to shops. The five in this sale have guide prices ranging from £10,000 and £50,000 each, dependant on condition.

“One was purchased in 1998 for just 50p from a book shop sale bin during a holiday in Scotland. The parents inscribed it, ‘To Katie, on our holiday in Clachtoll 1998. Love from Mum & Dad’.

The vendor said: “The Philosopher’s Stone was purchased when our three children were quite young. We used to go on holiday to a campsite in Clachtoll in the North West Highlands of Scotland and bedtime reading was meant to be exciting after what may have been a typical summer’s dreich day. This book was bought at Achins, the most remote bookshop in mainland Scotland, on a wet and windy day from the sale bin for 50p, which perhaps reflected the slow initial uptake.

“The girls are now aged 27, 29 and 30 and are, thankfully, still regular visitors to the west coast and Highlands. Hopefully one day they will introduce their children to Harry Potter on those stormy west-coast days.”

Hansons is also selling FIVE first issue paperbacks of Philosopher’s Stone, with guide prices ranging from £1,000 to £5,000 each.

Another rare find, pre-dating the first issue hardback, is a proof cover design for Bloomsbury, dated June 1997. This is a scarce proof sheet of the proposed illustrated wrappers, which would have accompanied one of 200 uncorrected, pre-publication copies of the book. A rare survivor with considerable variations from the final published version, it’s guided at £700-£1,000.

Movie magic and a guide price of £10,000 comes to the fore in a lot which includes four taxidermy specimens of snakes and lizards hired by Warner Bros for the first Harry Potter film, Harry Potter and the Philosopher’s Stone, in 2001. The lot includes rental agreements and instructions from the Harry Potter Art Department at Leavesden Studios to Snowdonia Taxidermy Studios, which has consigned the items to auction. 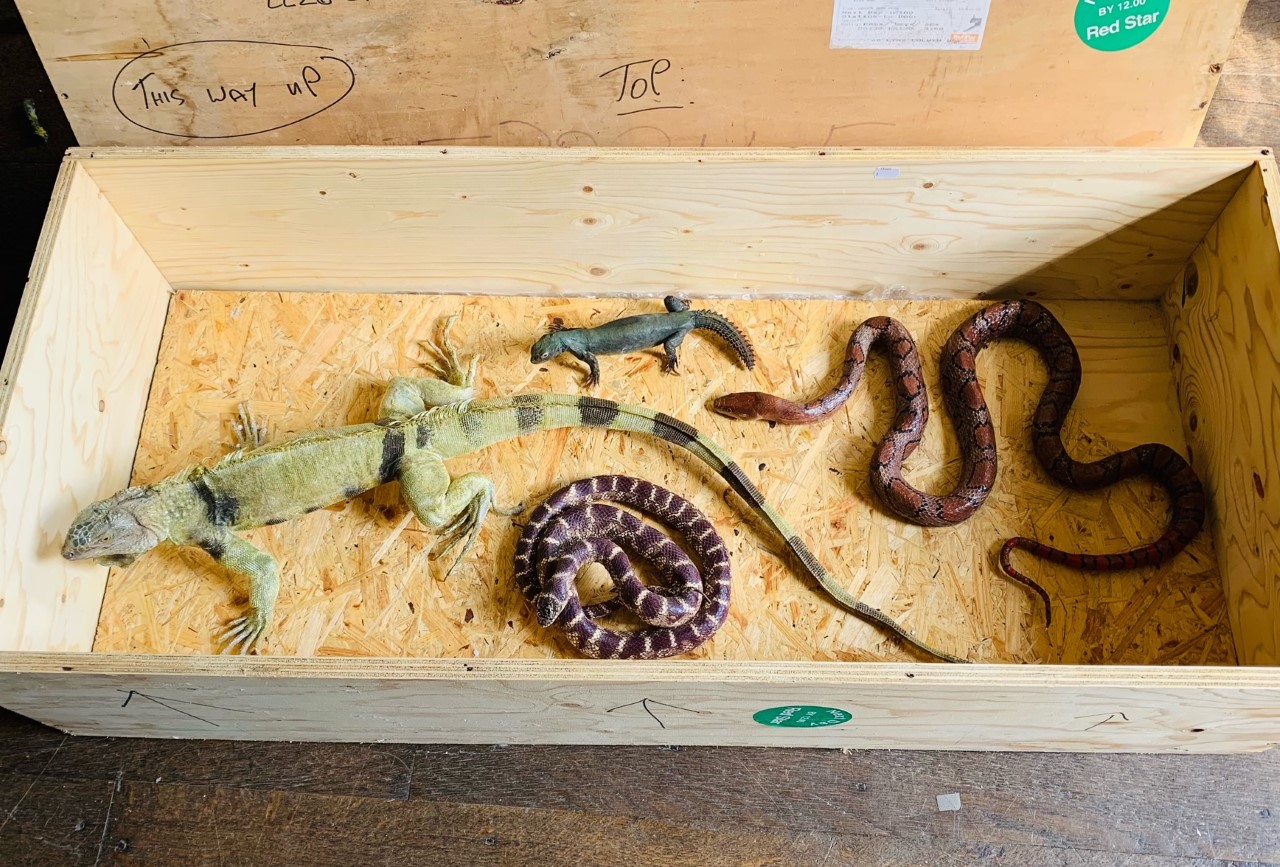 ‘Potterheads’ can also bid on an archive of Harry Potter goodies from Matthew LaCroix, author of a fan letter famously used on the dust-jacket of Harry Potter and the Goblet of Fire.

Matthew was only 12 when he wrote to JK Rowling: ‘Dear Joanne Rowling, Looking forward to lunchtimes, so I could read Harry’s world of magic, is great, so …thank you for adding that touch of excitement in my day…. Please, Please, please, Please, PLEASE!!!!! Bring another one, keeping writing, my life depends on it. Yours Sincerely, Matthew LaCroix, Your No. 1 fan!’

His parents were unaware he’d sent the letter but parcels began arriving from Bloomsbury and he was soon making news. The archive, guided at £3,000, comprises gifts and correspondence sent to Matthew from Bloomsbury, a first edition Goblet of Fire signed by the author, promotional posters featuring his letter; confirmation his fan mail will take ‘pride of place’ on the jacket; photographs and material relating to a book signing Matthew did for Waterstones, and more.

More Potter magic emerges courtesy of a story attached to a first issue hardback of Chamber of Secrets. It bears an intriguing inscription, ‘To Jill, who very spookily gave me a beautiful card with something from Book Four on it! With many thanks, JK Rowling‘.

The seller met J K Rowling when she was a young Potter fan. Her mother was a teacher at Dunblane Primary School and JK Rowling paid them a visit in February, 1999.

The vendor said: “My mum had arranged with other members of staff to take JK Rowling for lunch at a café in Dunblane High Street and asked if I could come along too. I was 11 at the time and a huge Harry Potter fan.

“We all arrived at the café. JK Rowling sat beside me and the two of us had a good chat. She was really lovely. I had brought a card which I had made for her and also my copy of Chamber of Secrets which I was hoping JK Rowling would sign. Amazingly, she said I had drawn a creature from Book Four on the front of the card! She asked me not to tell anyone because it was a secret. 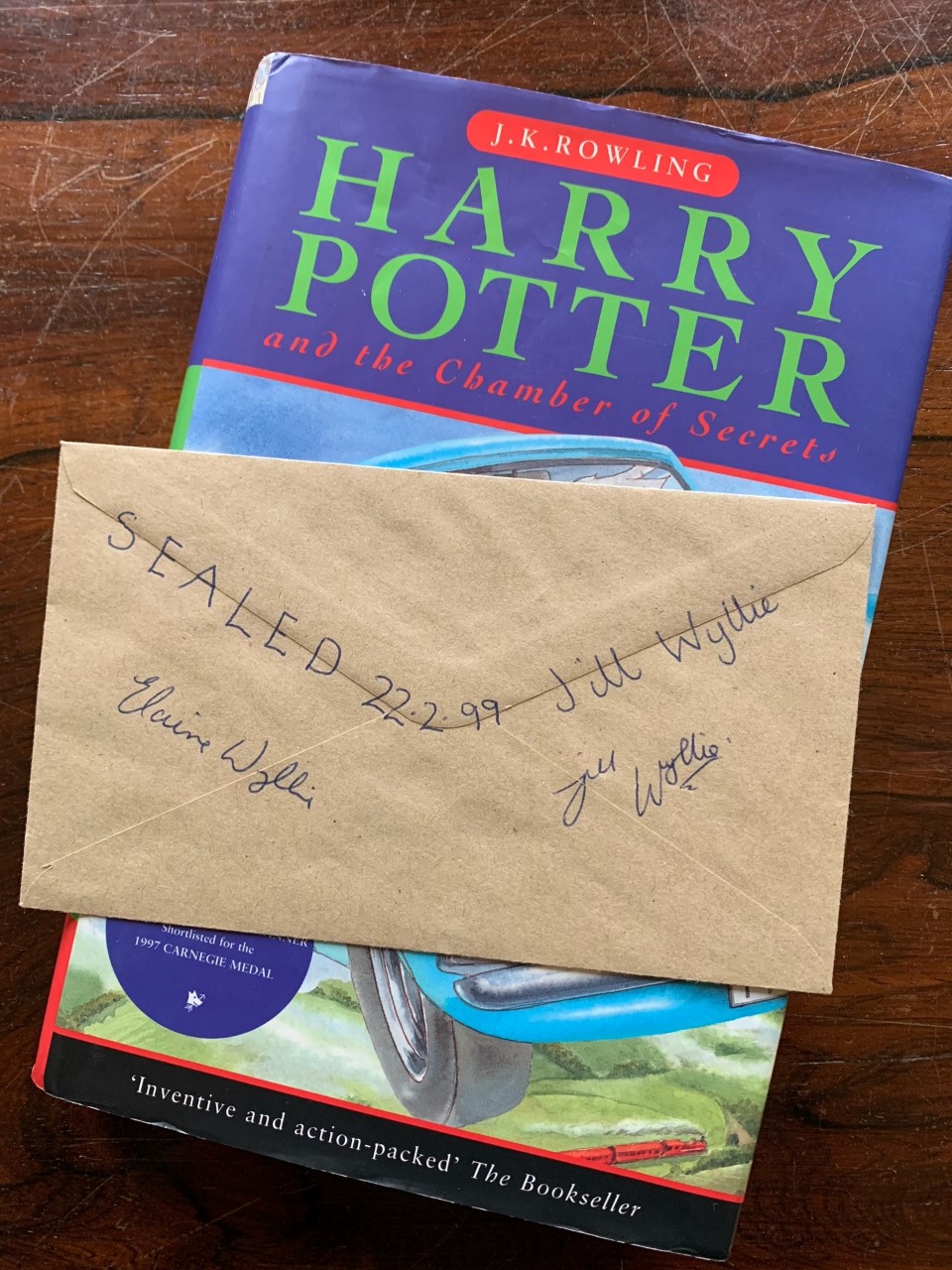 “Book Four was not due to be released for more than a year. I never told anyone what the creature was, though now I can reveal it was a mermaid shaped liked a ‘J’ for Joanne. JK Rowling then signed my book with that amazing inscription. That night, I wrote the name of the creature on a piece of paper and, without letting anyone see it, placed it in an envelope. My mum and I signed and sealed the envelope just for fun and I used it as a bookmark.

“I never imagined the book would be worth anything and lent it to a couple of friends. Now I want to move house and have decided to sell my precious book and the envelope.”

The Harry Potter Auction includes other signed books with wonderful inscriptions. For instance, ‘To Adele, or should I say Ginny Weasley? J K Rowling‘, which was signed at Edinburgh Book Festival in 1998.

There are also two first editions of Order of the Phoenix signed by the cast of children from the film including Daniel Radcliffe, Emma Watson and Rupert Grint. The vendor arranged for two books to be signed, one for each of her two children. Daniel Radcliffe has inscribed each one, ‘Magic Rules OK!‘ and ‘Magic Rocks!‘  Estimate £1,500-£2,500 each.

Police drama comes to the fore in one lot, a first edition of Half-Blood Prince. It was an original exhibit from a theft and blackmail case involving armed police, all sparked by Potter fever prior to the release of the novel.

Six weeks before the eagerly-anticipated publication of the penultimate novel in the Harry Potter series, two copies of the book were stolen from a secure distribution centre in Northamptonshire.

An attempt was made to obtain money from two national newspapers by revealing the novel’s secrets. A journalist involved tried to flee with the books but the perpetrator fired an imitation Walther PPK pistol in their direction and was arrested by armed police. An attempt was also made to blackmail publishers Bloomsbury by revealing the book’s contents.

The judge delivering sentence said at the time: “It was only through the good services of the press and police that this was prevented and fans of Harry Potter, young and old, were able to read this book without their pleasure being polluted.”

The vendor, an anonymous retired police officer, has provided a statement confirming his involvement in the case and the fact that the book was given to him as a gift for his hard work. Estimate £500-£800.

Potter power means random items linked to the phenomenon are valuable – even an auction catalogue. In 2007 one of Rowling’s seven manuscripts of The Tales of Beedle the Bard sold for £1.95 million. Hansons is offering an auction catalogue from the sale signed by Rowling and four cast members from the Harry Potter films, Devon Murray, Matthew Lewis, Fiona Shaw and Evanna Lynch. Estimate £500-£800.

Other lots include two original ink cartoons by Nick Newman for The Sunday Times, satirising the huge excitement around the release of Harry Potter and the Goblet of Fire, guide price £200-£300, plus various first editions and signed books.