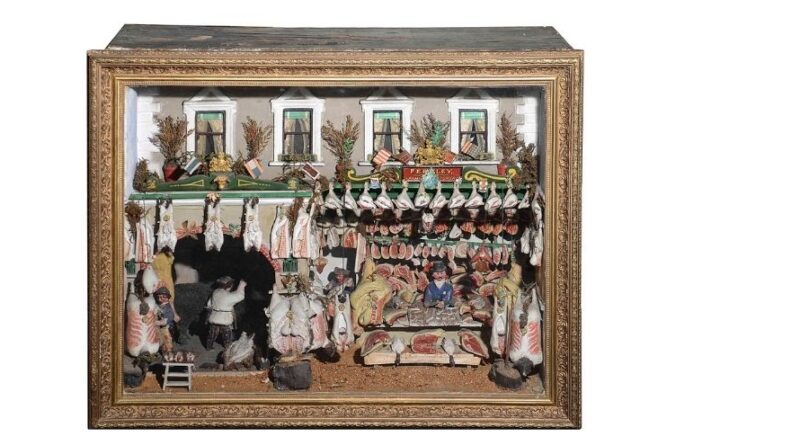 An impressive Victorian Folk Art butcher’s shop display model of  Butchers, that was originally in Limehouse (East London) will be offered by Catherine Southon Auctioneers & Valuers in an online auction on Wednesday, on June 9 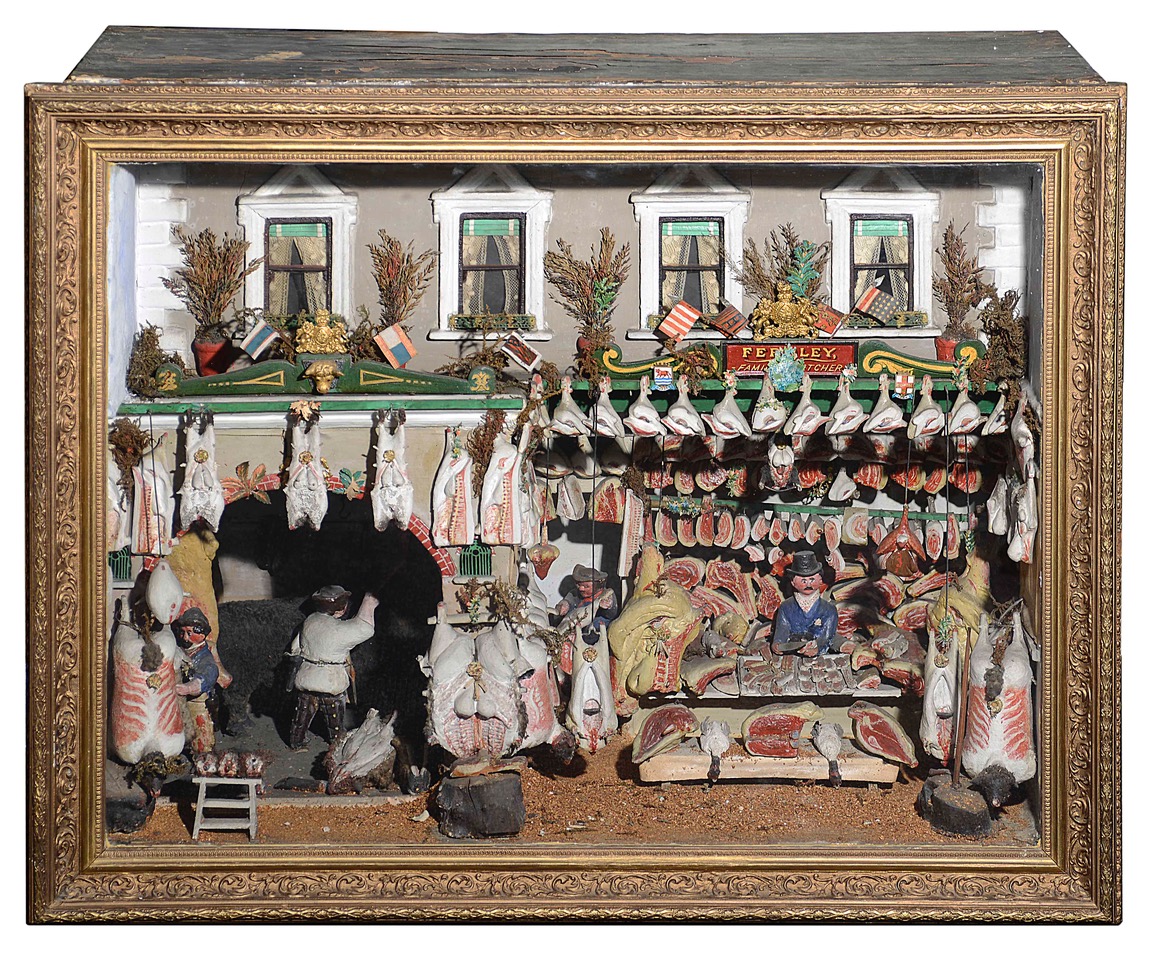 The polychrome decorated wood and plaster model is finely detailed and depicts the shop front on one side decked with meat cuts, carcasses and produce with a butcher holding a steel knife. Whilst on the other side, the model depicts an abattoir showing figures engaged in butchery including the slaughtering of a bull, above the sign inscribed ‘Fernley Family Butchers’.

The model, which measures 78 cm high and 94.5 cm wide dates from 1880, is being offered on behalf of the Worshipful Company of Butchers, who bought it in 2012. Prior to that, it was on loan to the Museum of Childhood, Bethnal Green for over thirty years. The Company will also be selling an unusual display case containing a selection of butchers’ tools in miniature, a large regulator and lighting from the Butchers Hall. Dating from circa 1900, the display case containing a selection of butchers tools and equipment includes miniature saws and meat cleavers and is estimated at £400-600.

The Worshipful Company of Butchers is one of the oldest of the 110 City of London Livery Companies – they can trace their roots back to 975 AD – and is ranked 24th in order of precedence. 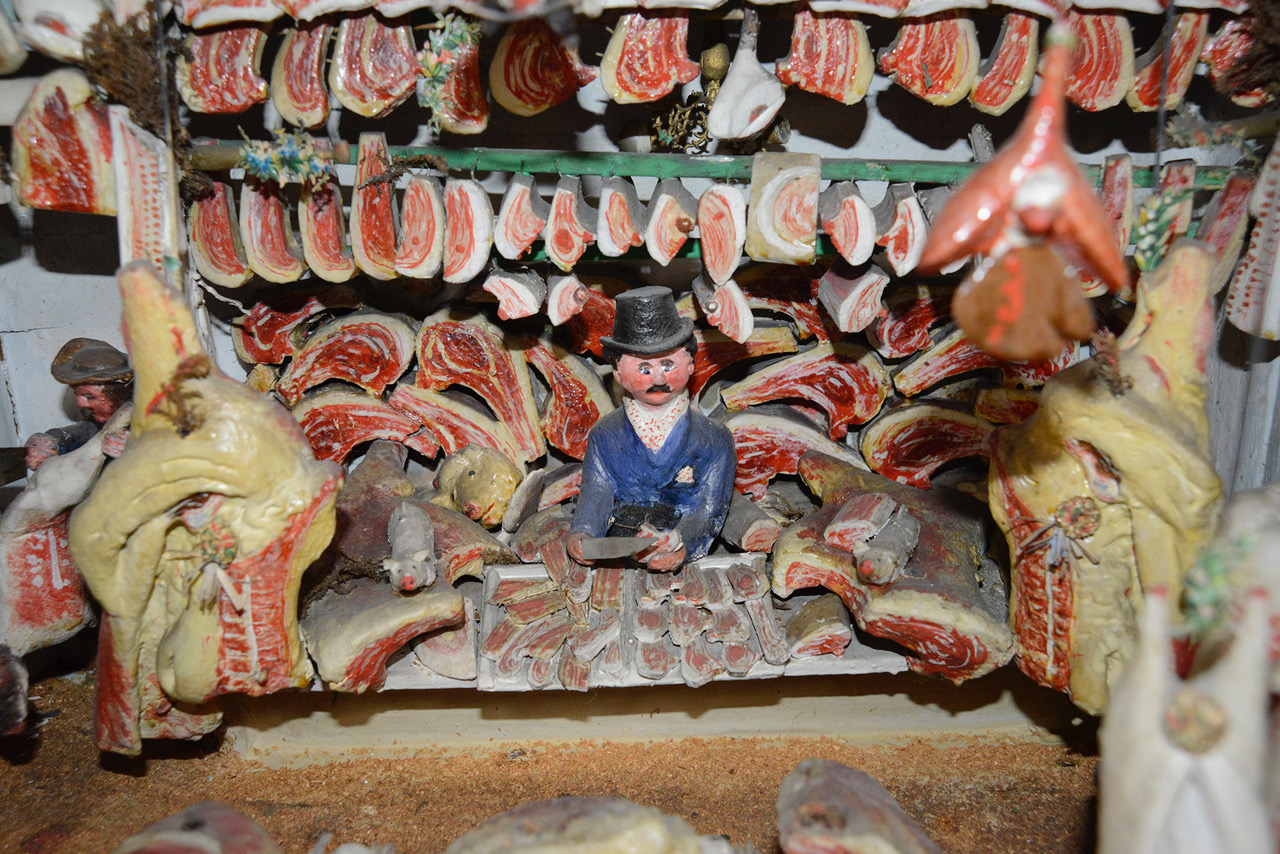 Andrew Parker, Master of the Worshipful Company of Butcher explained: “Over the last five years we have rebuilt and refurbished the historic Butchers’ Hall in Bartholomew Close and sadly there is no longer anywhere to display the stunning model and tools in all their glory, so we have made the decision to sell them. The Covid-19 pandemic has hit the Butchers hard and we have been unable to fundraise as much as normal to support our objectives of Charity, Education and Fellowship – so the money raised from this sale will help strengthen the Livery Company in its time of need.”

Catherine Southon commented: “We are honoured to be auctioning such an exceptionally large and unusual Butcher’s shop model that is so detailed and shows the two different scenes side-by-side.  This is a very fine example of Folk Art with incredible detail and a wonderful history.”

She continued: “It is believed that these models were placed in butcher’s shop windows when the shop was closed as an advertisement – It is the very best of its type and each time you look at it you see something different.” 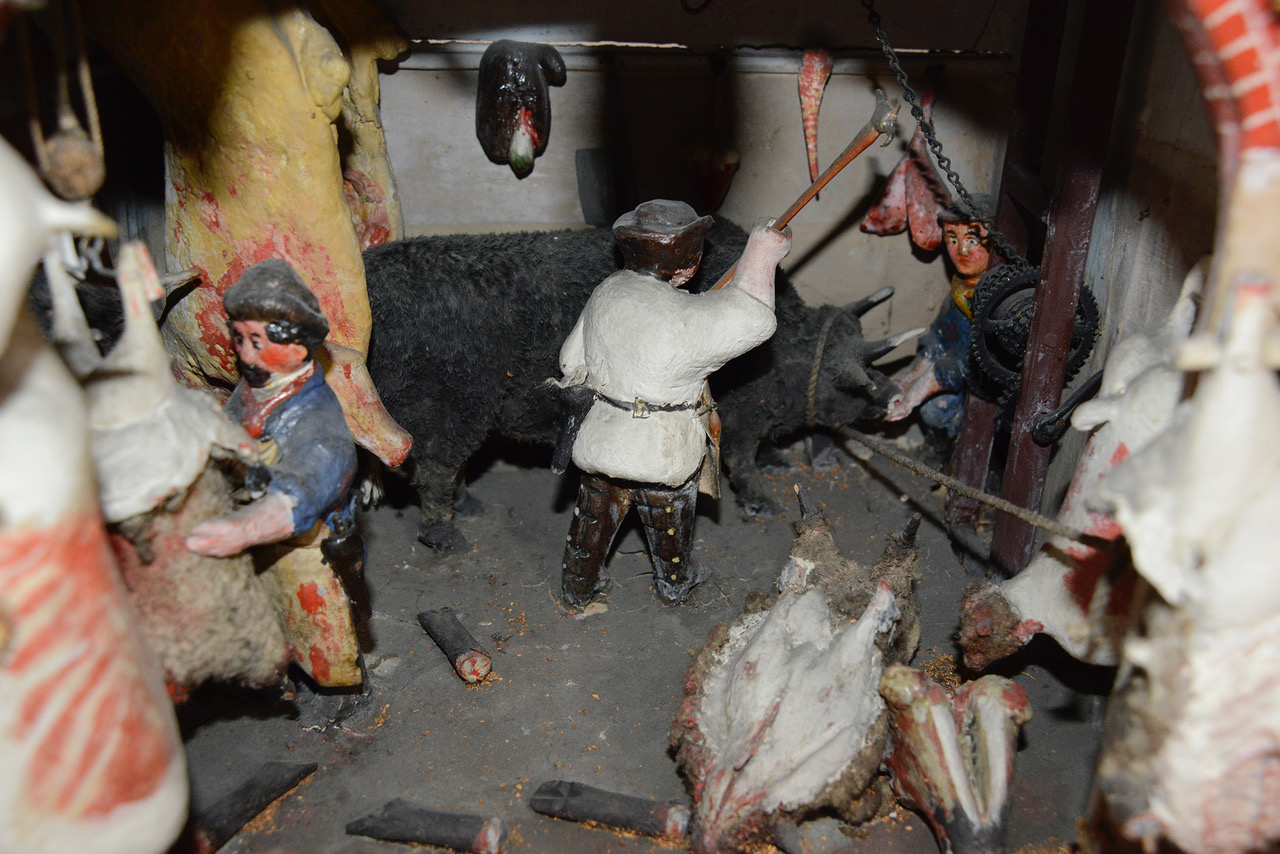 Also in the sale will be a first hand document recording one of the most significant naval events of the Second World War – the sinking of the German battleship Bismarck. The important Royal Naval telegraph message was sent from HMS Dorsetshire reporting the sinking on a printed Naval message slip filled in in pencil by the operator stating: ‘MOST IMMEDIATE, TO: S.O. Force H. FROM DORSETSHIRE. ‘I TORPEDOED BISMARCK BOTH SIDES BEFORE SHE SANK STOP SHE HAD CEASED FIRING BUT HER COLOURS WERE STILL FLYING. =1107’ System 7/C. Receipt: 12-10, Operator CJY? dated 27/5/41. Mounted and framed, it is estimated at £400 – 600.

Elsewhere a pair of shorts and socks worn by Paul Gascoigne during the iconic Euro ’96 Football Championships where England triumphed over the Netherlands 4-1, together with two of his spare Adidas Predator football boots with embroidered ‘Gazza’ tongue is expected to fetch £800-1,200. The items were initially bought at a charity auction and are being sold with a hand-written note from former radio DJ Danny Baker authenticating the boots, shorts and socks stating ‘I confirm that these shorts, socks + spare boots were give [sic] to me by Paul Gascoigne directly after England’s 4-1 victory over Holland at Euro 96. Socks + shorts as worn, unwashed! Danny Baker 2/2/02‘, the reverse of the note showing a photograph of Gascoigne, Baker and Chris Evans.

Finally, the sale will include a wonderful private collection of designer handbags including iconic designs such as a Hermes golden brown/camel ostrich Birkin 30 bag from 2007 with a leather covered padlock, in a Hermes dustbag and Hermes outer bag dustbag and Hermes box, along with original invoice and Certificate of Origin, which is estimated at £6,000 – 10,000 as well as a Hermes Kelly 32 in Etoupe Epsom leather with a padlock and two keys, that according to the vendor has been used once and is expected to sell for £3,000 – 5,000.  There is also a selection of limited edition Louis Vuitton bags and shoes. Gentlemen are not forgotten as the sale also includes designer watches by Rolex and Omega, and luggage and bags by Louis Vuitton.