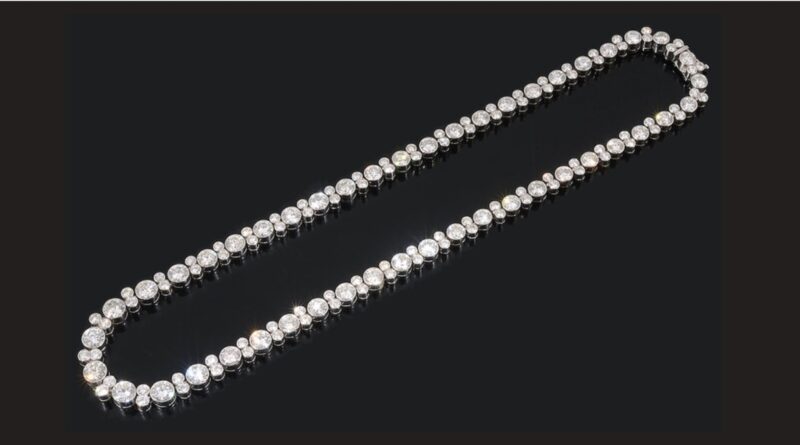 Composed of a flexible graduated row of 46 brilliant-cut diamonds collets with an estimated weight of 25 carats, the necklace fetched £27,280 in an online/live auction of antiques & collectables. It was sold by a local family and was bought by a member of the UK trade. 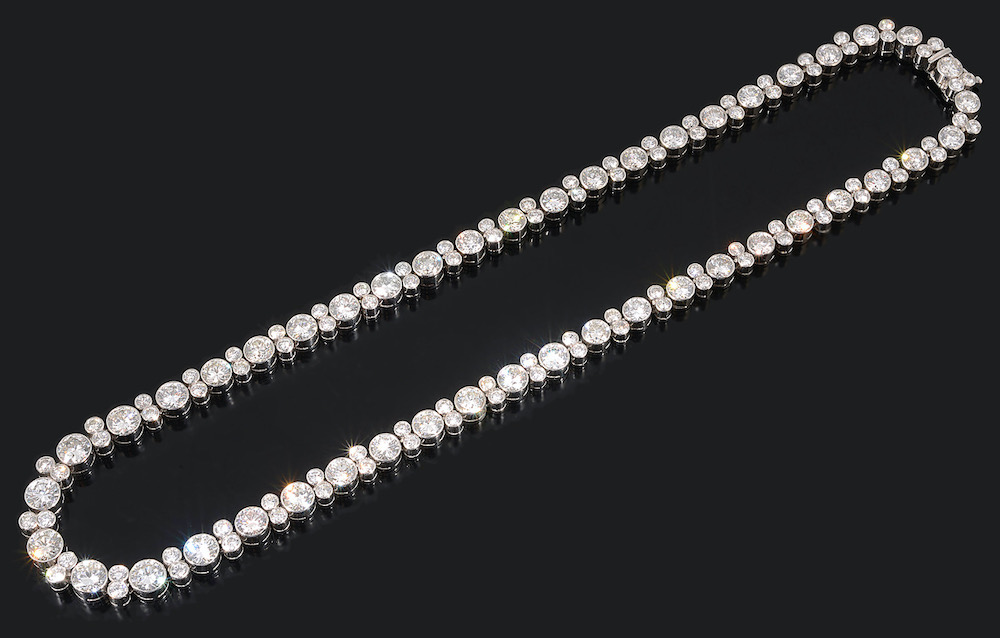 Elsewhere, a pair of unwashed shorts and socks worn by Paul Gascoigne during the iconic Euro ’96 Football Championships where England triumphed over the Netherlands 4-1, together with two of his spare Adidas Predator football boots with embroidered ‘Gazza’ tongue sold for £4,960 against an estimate of £800-1,200.

The items were initially bought at a charity auction and are being sold with a hand-written note from former radio DJ Danny Baker authenticating the boots, shorts and socks stating ‘I confirm that these shorts, socks + spare boots were give [sic] to me by Paul Gascoigne directly after England’s 4-1 victory over Holland at Euro 96. Socks + shorts as worn, unwashed! Danny Baker 2/2/02’, the reverse of the note showing a photograph of Gascoigne, Baker and Chris Evans. The lot saw bidding from across the world, and was eventually sold to a private buyer in the Far East. 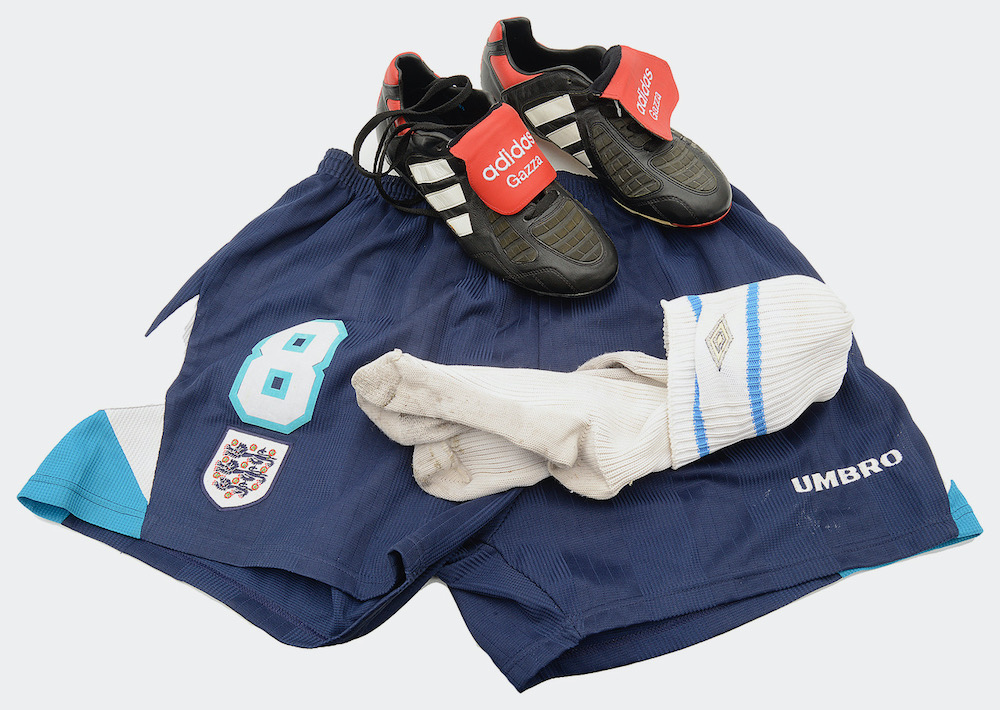 The sale also included a wonderful private collection of 50 lots of designer handbags, clothes and shoes which were 100% sold. The highest price was paid for a Hermes golden brown/camel ostrich Birkin 30 bag from 2007 with a leather covered padlock, in a Hermes dustbag and Hermes outer bag dustbag and Hermes box, along with original invoice and Certificate of Origin, which sold for £13,020 against an estimate of £6,000-10,000.  The second highest price was paid for a Hermes Birkin 30 cream leather bag that fetched £8,060 against an estimate of £2,500-4,500. They were bought by buyers from around the world including Hong Kong, but also the UK.
Also in the sale was a first hand document recording one of the most significant naval events of the Second World War – the sinking of the German battleship Bismarck. The important Royal Naval telegraph message was sent from HMS Dorsetshire reporting the sinking on a printed Naval message slip filled in in pencil by the operator stating: ‘MOST IMMEDIATE, TO: S.O. Force H. FROM DORSETSHIRE. ‘I TORPEDOED BISMARCK BOTH SIDES BEFORE SHE SANK STOP SHE HAD CEASED FIRING BUT HER COLOURS WERE STILL FLYING. =1107’ System 7/C. Receipt: 12-10, Operator CJY? dated 27/5/41. Mounted and framed, it sold to a UK Collector for £1,054 against an estimate of £400 – 600.
The sale had a strong furniture section, which saw a pair of William and Mary burr walnut, oak and parquetry candlestands sell for £4,712. The octagonal stands, which were being sold by UK collector, were made of fruitwood and had rosewood starburst parquetry tops on barley twist stems and scroll tripod bases. Estimated at £300-500, they attracted a lot of interest and were bought by a member of the UK trade. 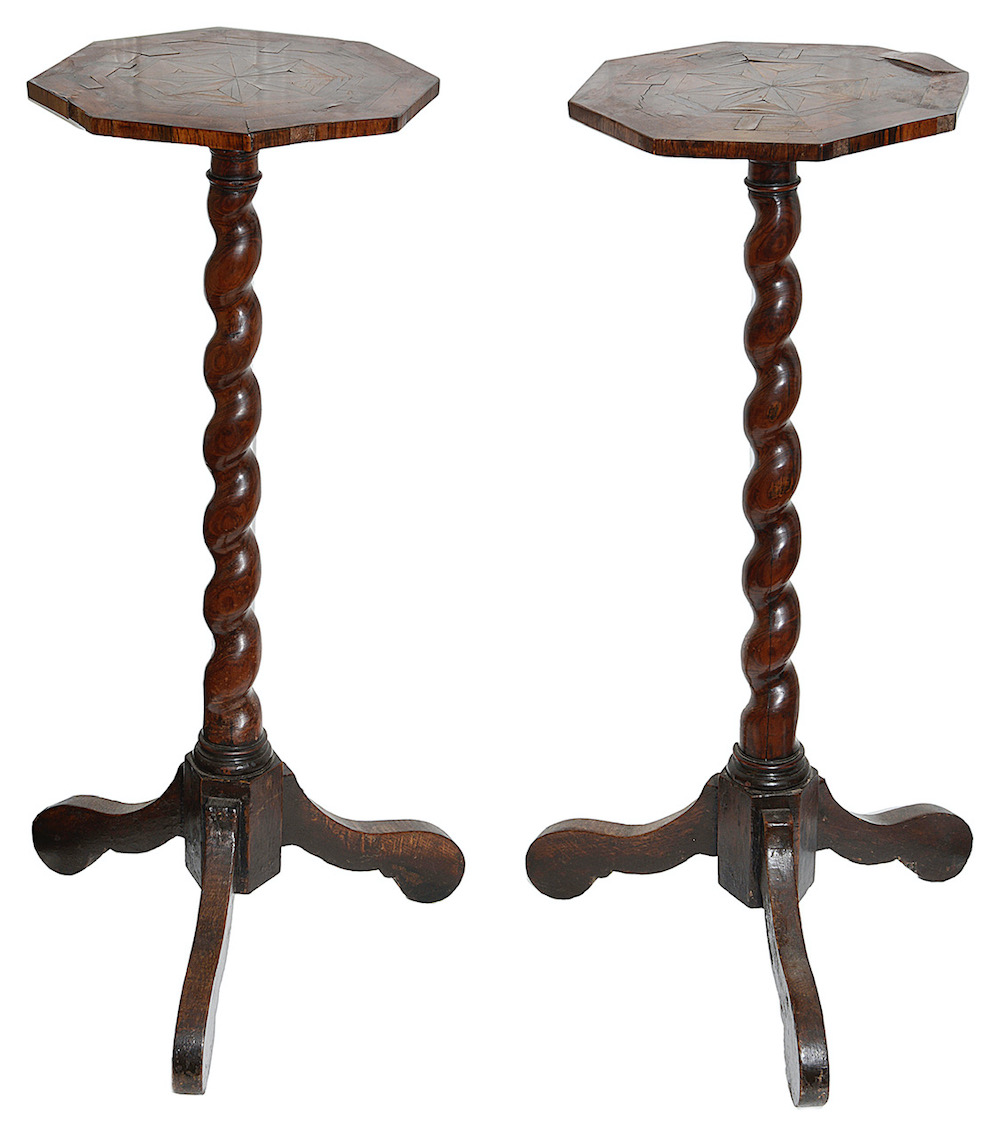