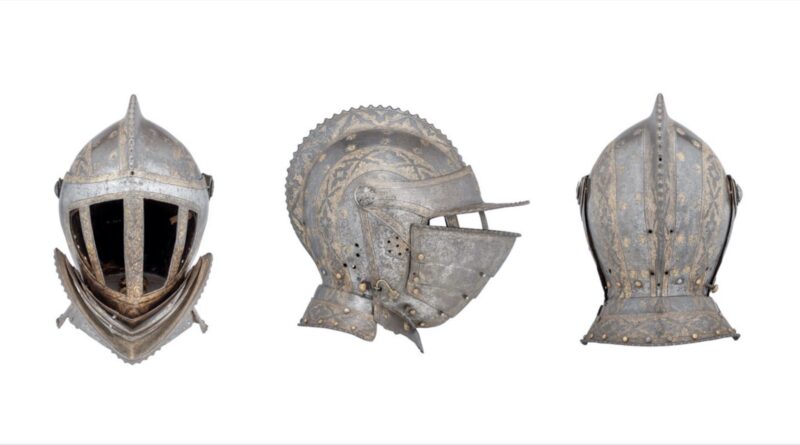 An important Renaissance helmet made a world-auction record price of £120,000 in Thomas Del Mar’s auction of Fine Antique Arms, Armour & Militaria in London.

Discovered in a house in Europe by Mr. Del Mar, this is one of the finest pieces to come onto the market for more than a decade. The previously unrecorded helmet was bought by the Philadelphia Museum of Art and will be re-united with the rest of the elaborate garniture, which is already in their collection, and includes a close helmet, gauntlet for the left hand, breast and backplate.

Made in Augsburg (South Germany), the gilt and embossed closed burgonet dates from circa 1555-60, and has etching attributed to Jörg Sorg the Younger. It was is estimated at £40,000-60,000, however after attracting much interest, which resulted in fierce competition between two private collectors and the Philadelphia Museum of Art, it sold for over double its pre-sale estimate.

Following the sale, Auctioneer and Expert-in-Charge, Thomas Del Mar, commented: “We were delighted with the sale. It was, of course, a particular pleasure to achieve a world record for a Renaissance helmet and to know that it will be on display in due course in such a prestigious International Collection. The sale also concluded this seasons’ fundraising campaign which has now raised in excess of £50,000 for the Wallace Collection, Westminster Abbey and the Grange Festival. We are extremely pleased to support these three institutions and will be continuing with this for the next three auctions.”

The second highest price in the sale was achieved by an extremely rare .31 calibre Colt Paterson pocket revolver, dating from 1837-40, which was among the highlights of the David Jeffcoat Collection and sold for £47,500 to a private collector from the USA. Overall, the Jeffcoat collection realised £240,900, which was close to its top estimate with other notable pieces being a pair of flintlock 40-bore duelling pistols by Joseph Manton dating from 1813 which fetched £17,500 and were purchased by a private collector.

Other interesting items included, from an English Noble Family, a rare Siamese (Thai) niello and silver giltmounted sword, dating from the 19th century, which was almost certainly made for a foreign dignitary that fetched £40,000 and was bought by a private collector, while a rare pair of Mexican so-called ‘Conquistador’ stirrups from the late 17th/ 18th century sold to a private collector for £36,250, against an estimate of £5,000 to £8,000. From another noble family was a fine Russian sword for bravery, dating from 1857, that sold for £35,000. Presented to Emil Karl Adolf, Prinz Zu Sayn-Wittgenstein-Berleburg (1824-78) by Manuel Antonio, 11th Marquis of Bedmar (1821-83), it was estimated at £7,000-10,000 and was purchased by a private collector.

Also included was the McEwen collection of archery and associated items which realised £37,025, more than four times its top estimate.