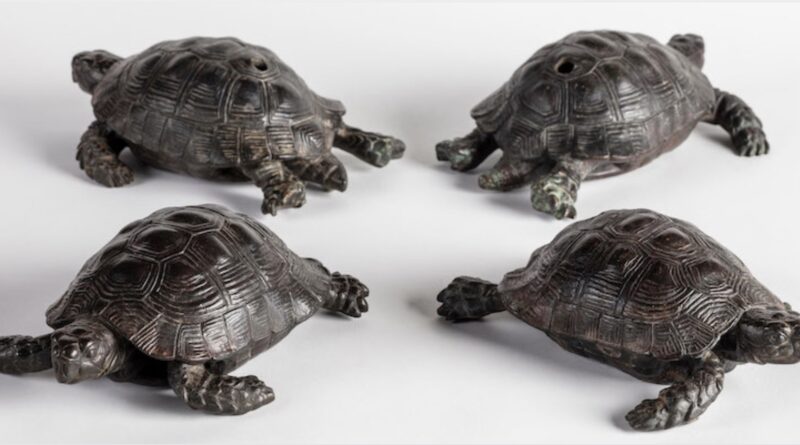 Nearly thirty years after they were stolen from a country mansion in Dorset, four historic bronze tortoises have been recovered and returned home, thanks to an entry spotted in an auction catalogue.

Kingston Lacy is the opulent former home of 19th–century collector and Egyptologist William John Bankes, (1786–1855) who made it a showcase for some of the finest art, decoration and sculpture. He also had a particular fondness for tortoises and kept several as pets.

While in Paris in 1853, Bankes commissioned the Italian-born sculptor Baron Carlo Marochetti to produce a set of sixteen bronze sculptures of tortoises to support four Verona marble urns for the grounds of the family home. In the following decade, Marochetti was responsible for casting the lions that guard Nelson’s column in Trafalgar Square.

Determined for the sculptures to be as accurate as possible, Bankes supplied Marochetti with one of his pet tortoises as a model.

The sculptor’s studio in Paris carefully created a mould from the animal which was used to cast identical bronzes. Afterwards Bankes collected the creature, writing with delight to his sister Anne, “Think of my carrying a live Tortoise in a bag all the way from the Palais Royal!”

The tortoises supported the urns at Kingston Lacy for over 140 years, admired by successive generations of the Bankes family and by National Trust visitors after the property passed to the charity in 1982.

However, on the morning of the 19 July 1992, one of the gardeners noticed that four of the tortoises supporting one of the urns, had been stolen.

The theft was reported to the police, and staff swiftly removed the remaining bronze tortoises for safe keeping, replacing all sixteen with replicas commissioned soon after, which have remained in place ever since.

James Rothwell, National Curator for Decorative Arts at the National Trust takes up the story: “Hope had faded over the years of recovering the stolen bronzes, and so I was astonished this spring to be contacted by Tim Knox, Director of the Royal Collection and a former head curator at the National Trust, to say that he had seen a cast bronze tortoise, made by Marochetti, listed for auction. Could this be one of those stolen all those years ago?

“Close inspection of the tortoise revealed it was identical to those still at Kingston Lacy. Tell-tale signs that confirmed the identification were the hole in the tortoise’s carapace where it had been attached to the urn, and the Roman numeral ‘I’ branded into the bronze, which was part of Marochetti’s system for numbering each set of four.

“The tortoise’s owner had purchased it online and subsequently put it up for sale. Once he and the auction house learned that it was in fact a cast of Bankes’ beloved pet, they withdrew it from the sale and returned it to the team at Kingston Lacy.”

The discoveries didn’t end there. The trail of tortoise number ‘I’ eventually led to an antiques dealer who had acquired the set of four from a scrap metal dealer, completely unaware of their history. He too was delighted to reunite the remaining three with their long-lost companion.

The return of the four bronze tortoises to Kingston Lacy has provided the chance for them to go on display for visitors to see and for more research into their story and significance.

Dr Elena Greer, Property Curator at Kingston Lacy explains: “We know that William John Bankes loved tortoises, not only because he kept them as pets and from the commission of the bronzes for the urns, but from other clues around the house, for example, he added tortoises to the bases of the two Italian giltwood candelabra in the saloon.

“The idea of the tortoise or turtle holding up the earth on its back is referenced in a number of mythologies and appears in John Locke’s ‘An Essay concerning human understanding’ of which we have copies that belonged to William John’s father. Perhaps his interest in the creature stemmed from having read this.

“The Bankes family also appear to have acknowledged William John’s interest in the tortoise after his death. Henrietta Bankes, the wife of his great-nephew, bought a wooden footstool for the house carved in the image of a tortoise with its carapace in red upholstery.

“It is clearly a creature that brought much pleasure to the family and so it is wonderful that we can welcome four of our tortoise residents back home after such a long time and can display them for our visitors to enjoy.”