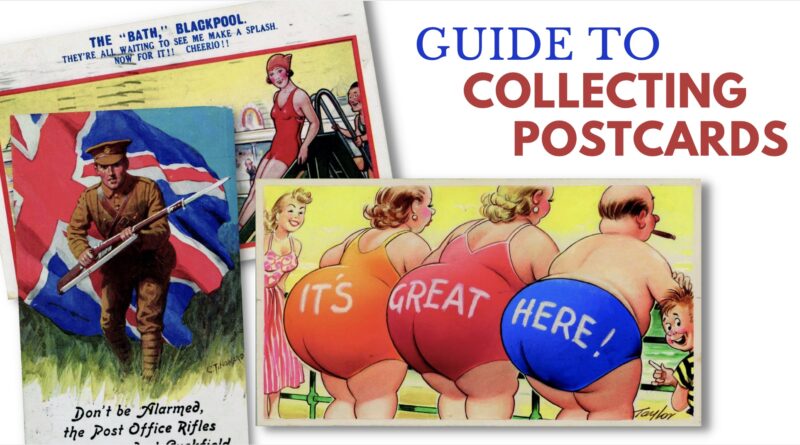 While we might not be sending many this summer, the humble postcard has been connecting British people for more than a century and a half. Read our essential guide to collecting postcards

When it comes to an area of collecting that offers something for everyone, there can be few to equal the variety, affordability and historical and cultural interest of the postcard.

The opening of a delayed exhibition at the Postal Museum, Wish You Were Here: 151 Years of the British Postcard, reveals how such a seemingly simple means of communication, from saucy to scenic, continues to entertain and enthral us even in the age of wall-to-wall social media.

The arrival of the postcard in Britain in 1870 followed its launch in Austria just a year earlier. Writer, researcher and postcard collector Guy Atkins, who curated a display on Parliament Square postcards for the exhibition, said: “Austria introduced them in 1869, sparking calls for postcards to be brought to Britain.

“The first official versions had no pictures and were simply something you could write the address on one side and a message on the back.” The format stayed the same for 25 years. While the new penny post introduced in 1840 allowed letters to be sent cheaply throughout the country, the postcard represented a different innovation.

At half the cost, they became known as the half-penny postcard or the ‘letter of the poor’.

The postcard proved an instant hit, with numerous publishers recognising its popularity. In its initial incarnation as a pre-stamped, simple blank card, it was well suited to a particular sector of society. Guy said: “It tended to be businesses that used it, as a way of being able to write cheaply and speed up business communications,”

But it wasn’t long before the simple missive was championed by some important people. “Gladstone, for example, was a big fan. He sent thousands of postcards and actually got involved with its form by later requesting a thicker postcard.”

The frequency and speed with which correspondents could communicate was another key attraction in an era that pre-dated the telephone.

One of the other factors was the number of daily postal deliveries, with central London receiving up to 12 a day, meaning a card sent in the morning would arrive by lunchtime. The frequency of the deliveries meant the letters were more like telegrams.

Guy said: “The system encouraged people to write in informal ways. You didn’t have to write it like a letter, it was a new and exciting form of communication.”

By the 1890s, continuing improvements in printing methods, particularly in Germany, ushered in cards that featured printed images. In 1894, the Royal Mail granted permission to publishers allowing them to sell picture postcards in the UK.

The move coincided with the growing popularity of day trips to British coastal resorts by increasingly affluent workers taking full advantage of the earlier 1871 Bank Holidays Act. Once again, publishers spotted an opportunity and were soon producing postcards with images of seaside towns and other much-visited destinations.

While demand for postcards was clear, the next chapter in their ongoing evolution triggered unprecedented interest. Early postcards demanded a full side for the address meaning both the image and the message had to go on the other side.

However, in 1902 the Post Office allowed both the address and message to be written on one side of a postcard, and publishers quickly responded by producing cards with the now familiar dividing line down the back, allowing the message and address on one side and a full picture on the other.

The subsequent impact of this small and subtle change was huge. Guy said: “You have the postcard that we recognise today. It took off in popularity and there was a big collecting craze in Edwardian times, which was really the golden age of the postcard.”

The epicentre of this burgeoning industry was largely located in the capital, specifically around St Paul’s where the headquarters of the Post Office was then located. So much so that the area soon became known as the ‘Postcard Mile’.

Publishers such as CW Faulkner & Co, WH Smith, Francis Frith and Bamforth & Co were among the companies vying for business, and were keen to exploit the public’s appetite in inventive ways.

One young entrepreneur, Evelyn Wrench, realised the death of Queen Victoria would spark a huge demand for pictures of the late monarch. He arranged for images to be printed in Germany, making an overnight fortune and soon became known as the ‘Postcard King’.

As the postcard boom continued to gain momentum, publishers worked hard to keep fuelling the enthusiasm. With the industry based on collecting, publishers strove to encourage the hobby, with prizes for people who had collected most of their postcards. Guy said: “There was a woman in Norwich who supposedly collected 25,000 postcards of Raphael Tuck & Sons, one of the main publishers.”

Guy described one collector’s decade-long quest to complete his 2,300-strong collection of Edwardian postcards by the artist AR Quinton, published by J Salmon Ltd. “The last 10 were very difficult to find as they were the least popular cards. So for him a card of Rhyl station was the holy grail!”

Alongside the plethora of series focussing on topographical subjects, ranging from medieval churches and railway stations, to historic houses and sporting grounds, postcards of prominent figures proved popular. Actors were among the professions keen to exploit this early marketing method. Gladys Cooper, a popular theatre and film actress in the 1920s, seized the opportunity, with a number of postcards, many of which are hand-painted, still cropping up on the market.

Further fertile ground for postcard publishers in the years before radio and television, was recording historical and newsworthy events.

Guy said: “When there was a fire, flood, railway crash or other big event, they would race to produce postcards, turning them round in incredibly quick timescales that were appealing for the public to buy.”

Similarly, the battles of the Boer War and various royal events were all captured for posterity and profit, along with the key players engaged in the political machinations of the day, such as the Suffragettes, with publishers keen to promote both sides of the debate.

Postcards became a platform where political debate was carried out in a way that went directly into the heart of the receivers’ homes.

Such was the demand from this new breed of collector that from 1900 to 1907 there was even a magazine published with the latest industry news.

By the end of WWI, the boom time for buying or collecting postcards had, by and large, come to an end and over time it increasingly became a way of sending greetings from holiday destinations to family and friends. At the beginning of the war roughly a billion cards were sent each year in Britain, but by the 1920s the number had slumped to a quarter that number.

The decline was due to various factors, ranging from the Post Office reducing the number of deliveries and the arrival of the telephone, to a post-war shift in the national mood and, later still, changes to the postcard rate which saw them subsumed into the two-tier postal system requiring a first or second-class stamp.

In today’s digital age, while collecting postcards still retains a certain quaint appeal, early and rare examples are sought after by collectors. And, just as the range of subjects they feature is limitless, so, too, the choice collectors might focus on.

Although originally sold for just pennies, a lifetime collection can be worth up to £10,000. For most modern collectors it is the picture on the card that creates the main interest, as recent sales show.

A meticulously catalogued archive of 4,500 postcards relating to Cumbria and the Lake District was a highlight of a recent sale at the Lichfield-based Richard Winterton Auctioneers, selling for £4,250.

Ephemera specialist Robert French, said: “From day-to-day working practices from bygone Cumbria to evocative images of the Lake District, the collection was a breathtaking archive of the area from the Edwardian era to the mid-20th century.”

At the Shropshire auction house Halls, a lifetime’s collection of more than 23,000 postcards, including 442 comic designs by Donald McGill and Fred Spurgen, sold for close to £10,000. The collection included a set of 96 silk postcards, some from the WWI, that fetched £180 each.

He continued: “Don’t overlook topographical scenes. Non-tourist picture postcards make significantly more money. For example, a black and white card showing Crewe is harder to find than a view of the promenade at Blackpool or Rhyl.”

Saucy postcards featuring large ladies, naughty vicars, Jack the Lads and put-upon husbands were found in every seaside souvenir shop and newsagents from the 1930s onwards.

While these risqué cards, which were produced in their thousands, can be bought for a few pounds – or even pence – at boot sales and flea markets, the unique artwork from which they were printed can be worth much more.

In 2016, Peter Wilson sold five ‘saucy’ works by the Manchester artist AJ Williams for a total of £330.

Auctioneer Robert Stones said: “Saucy postcards were so popular that many hundreds of thousands were printed and so they remain more common and invariably worthless. However, original artwork for cartoon cards is rare and collectable for the postcard enthusiast, even though our idea of humour might have changed.”

In 1954, the newly-elected Conservative government launched a morality campaign and some of the cards were banned as obscene. Changing attitudes towards the cards’ content and a decline in the quality of the artwork and humour led to their demise in the 1980s.

When collecting postcards, those featuring, or sent by, well-known figures and celebrities from yesteryear can command a premium.

At £3,950, an antique postcard of Harry Houdini (1874-1926) is clearly signed by the escapologist in black ink below his portrait. The condition is described as excellent, with just minor surface marks and slight folding to one corner. Paul Fraser, founder of Paul Fraser Collectibles, commented: “I believe Houdini signed this postcard between 1905 and 1910 – at the height of his fame. That adds allure for autograph collectors – they love to own signatures from celebrities at the peak of their powers.”

Other examples include a promotional postcard signed by Paul Newman (1925-2008); a postcard featuring a bust of the author Thomas Hardy (1840-1928) signed by the novelist; a signed postcard of Queen Victoria (1819-1901) and an illustrated card signed by the celebrated novelist and poet Rudyard Kipling (1865-1936). For more details go to www.paulfrasercollectibles.com

The 151-year-old story of the British postcard is explored in an exhibition at The Postal Museum, Wish You Were Here: 151 Years of the British Postcard which is open now until January 2, 2022.

The exhibition spans the history and many guises of postcards, including the British seaside, romance and First World War correspondence, culminating in their contemporary use.

Some of the exhibition’s highlights include the first British postcard from 1870; examples sent by British rifleman Harry Brown to his mother during the First World War offering a unique insight into front line conditions; and an illustrated postcard between sweethearts Harry and Olive with hidden messages of love in the stamps.

Exhibition curator Georgina Tomlinson, said: “An innovation of its day, people became obsessed with sending and collecting postcards – they documented the significant and mundane of everyday life, much like social media today.”