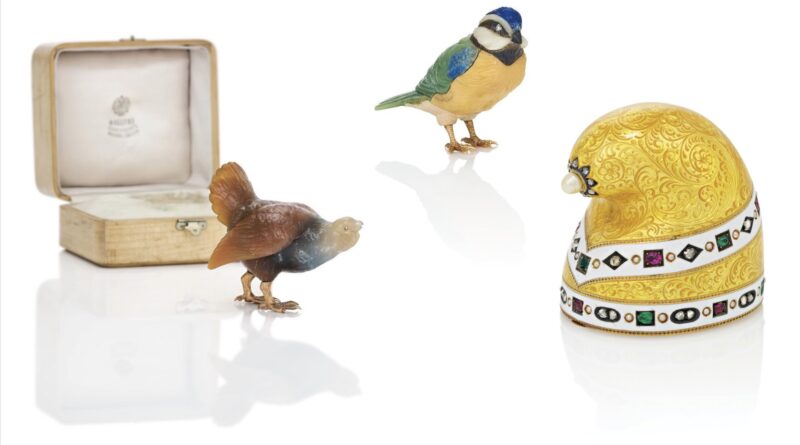 An iconic, private collection of Fabergé masterpieces from the collection of Mr. Harry Woolf will take place live at Christie’s London in November during the Autumn Russian Art sales season.

The selection comprises 86 pieces from Mr. Woolf’s extraordinary Fabergé collection which he personally composed over a period of nearly fifty years from the 1970’s until 2019.

Amongst the exquisite pieces are outstanding examples of objet d’art from the House of Fabergé – from jewelled hardstone animals and decorative photograph frames, to pill boxes, scent bottles, silver pieces and jewellery. A Selection of Fabergé Masterpieces from the Collection of Harry Woolf is, with particular reference to the collection of hardstone animals, considered to be one of the very finest private collections.

Mr. Woolf is recognised for having collected only the very finest examples of their type all of which exemplify the extraordinary craftsmanship and design of Fabergé and its master craftsmen of the time.

Harry Woolf began to collect Fabergé in the early 1970s at a time when he was already a successful businessman and owner of the London-based pharmaceutical company Underwoods the Chemists. Mr. Woolf relied solely on his own instinct and finely attuned eye in pursuit of the pieces that he purchased. The result is one of the most exemplary Fabergé collections known to have been curated by any private collector in the last fifty years.

Due to the quality, rarity and breadth of Mr. Woolf’s collection, pieces have been highly prized as loans to major Fabergé exhibitions around the world taking place at important museums and institutions. Mr. Woolf became a regular and generous lender to Fabergé exhibitions who wished to showcase pieces from amongst his revered collection throughout his lifetime.

More than ten rare pieces from Mr. Woolf’s prestigious collection (which are not included in the Christie’s London collection sale) are included in the forthcoming pivotal exhibition taking place at the V&A in London opening on November 20, Fabergé: From Romance to Revolution.

The hardstone animals, which Mr. Woolf had a particular penchant for, comprise one of the most whimsical groups of diminutive carved creatures and represent a rare group of works. Faberge’s impeccable craftmanship also lay in his genius to create objects seen as ‘everyday’ into individual works of art such as cigarette cases, scent bottles, cigarette lighters and bell pushes.

A small number of objects from the Woolf collection have a distinctive Japanese style, inspired by Japanese art known as Japonisme. Some of them are almost exact replicas of netsuke carvings (a frog and a cricket) and some were made in homage to Japanese design. 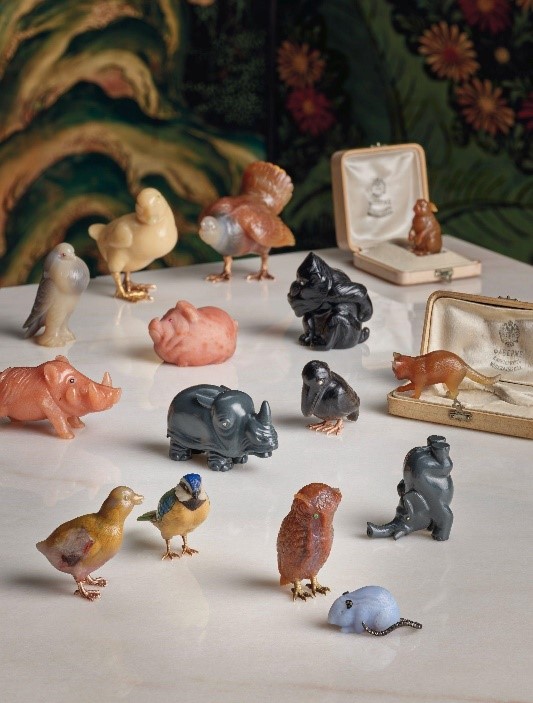 In addition, a large group of objects have a distinctive Russian style which was driven by a renewed interest in its own national heritage at the turn the last century.

Alexis de Tiesenhausen, International Head of the Russian Art Department, and Margo Oganesian, Russian Works of Art Specialist commented: “Harry Woolf’s impeccable taste, discerning vision and quest for perfection led him to establish one of the most revered iconic collections of Fabergé known in private hands. His collection has been a point of reference for all connoisseurs and lovers of Fabergé around the world for nearly half a century. It is a great privilege for Christie’s London to offer over 80 masterpieces from this collection and to have been entrusted by his family.”

The sale takes place on November 29.