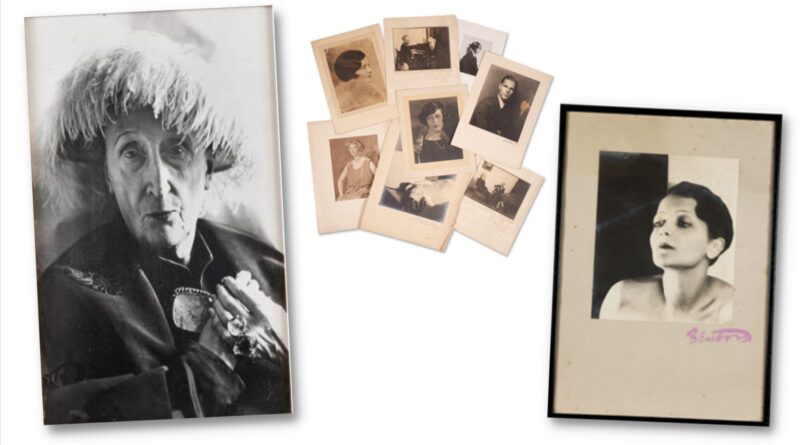 Photographs by Sir Cecil Beaton, CBE, the revered British, society, fashion and war photographer, are among a selection of photographs being offered at auction by one of the most famous literary families in England, the Sitwells. One is a photograph of the artist Pavel Tchelitchew (1898-1957), who was a great friend of the family (and a selection of whose works are offered in the sale, including a Pen, brush and ink portrait of Dame Edith Sitwell).

The photograph by the renowned Cecil Beaton (1904-1980), a great friend and frequent visitor to the Sitwell family seat, Weston Hall at the height of the Bright Young Things movement. The photograph depicts the artist at work and bears a stamp on its’ reverse of the Beaton studio. It is estimated to fetch £1,000-£1,500 at auction.

Beaton took many photographs of the Sitwell family, including the famous portrait of Dame Edith Sitwell in an ostrich feather hat, which resides in the V&A’s permanent collection and of which there is a print in the sale, as well as the original hat featured in the photograph. Others by Beaton in the sale are lots 268 and 269, which are portraits of Georgia Sitwell (1905-1980), wife of the writer Sacheverell Sitwell (1897-1988), taken in circa 1927, one of which is cut into an art-deco design. Each lot is estimated to fetch £700-£900.

The photographs are part of the sale of the contents of Weston Hall in Northamptonshire, a seat of the illustrious Sitwell family since the early 20th century and their ancestors since the 18th century. The spectacular sale charts the history of an eminent family of esteemed writers, eccentrics, pioneers and creatives through the centuries. The sale, titled Weston Hall and the Sitwells: A Family Legacy, offers a once in a lifetime’s chance to obtain a piece of literary history, the like of which has not been seen on the market for some time. It will take place at Dreweatts on November 16 and 17.

Others in the sale include a folio of seven portrait photographs from the 1920s and 30s of key members of the Bright Young Things of which the Sitwells were at the centre, with many parties and gatherings taking place at Weston Hall. Among them is a photo of Violet Gordon-Woodhouse (1872-1948), the first musician to record the harpsichord. She was photographed by the British portrait photographer known for his portrayals of professional musicians and composers, such as Gustav Holst, Herbert Lambert (1882-1936).

Violet first met Osbert Sitwell at one of the Sunday afternoon recitals she gave at her home in Ovingdon Square, London, during the First World War. She became a close family friend, and all three Sitwells stayed with her at Nether Lypiatt, her home in Gloucestershire and visited her in Mount Street, Mayfair, London.  Throughout her life Violet kept to a rigorous practice schedule and Sacheverell and Osbert Sitwell both wrote that they had only known two women of genius, one was their sister Edith, the other was Violet Gordon-Woodhouse.

The second photograph in the set is by Paul Laib (1869 – 1958) a naturalised British subject, of German descent, who worked as a fine art photographer, producing photographic records of paintings, drawings and sculpture, as well as capturing all the major artists in Britain on camera between 1898 and 1950s, including the English painter John Piper (1903-992), whose oil work Two Scenes of The Tower of London is being offered in the sale (Lot 313). His subject in this case is Mrs. Viva King (1893-1978), who was referred to by Osbert Sitwell as both ‘the Queen of Bohemia’ and ‘the Scarlet Woman’, for her unconventional marriage to Willie King (British Museum curator who died in 1958).

Others in the set include a bromide print on card of the Hon Desmond Parsons (1910-1937), an aristocratic aesthete, regarded as ‘one of the most magnetic men of his generation’, a bromide print on card of Elizabeth le Mesurier in the 1920s, a great friend of ‘Mrs S. Sitwell’ believed to be by the photographer Macadams, a photograph of Frances (Mufi) Engleman, a cousin of Mrs. S. Sitwell by Greens Studio, Flemington  in the 1920s. Last is a photograph of Georgia Sitwell dating from circa 1928 by English photographer Paul Tanqueray (1905-1991). Tanqueray, a celebrated photographer in his won right took on an assistant ex-Cambridge graduate Cecil Beaton, who worked for him until Beaton was employed by Vogue. The complete set carries an estimate of £300-£500.