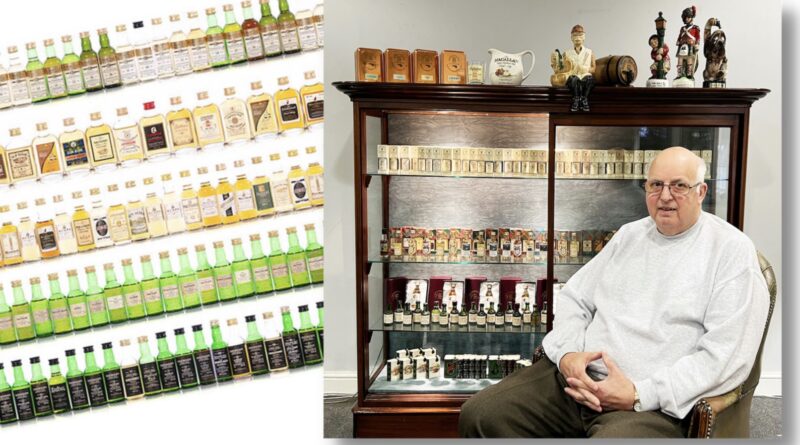 Successful bidders will be raising a glass when a vast collection of miniature bottles of whisky collected over three decades is auctioned this November and December.

The collection of 4,000 whisky miniatures will be auctioned without reserve in two timed online auctions by Gildings Auctioneers in Leicestershire.

The collection was amassed by keen Kettering collector Brian Marshall between the late eighties and around 2016. “A friend from work at Kettering Crematorium who was collecting full-sized bottles suggested I collect miniatures and it started from there,” Brian explained. “I don’t even like the stuff, but it took on a life of its own because I started planning my holidays in Scotland around it. There was one particular shop in Aviemore where I got to know the man who ran it and would stay and chat for two or three hours at a time.”

Until he made the decision to sell, Brian’s collection was stored in 130 boxes in his double garage, where a narrow pathway separated it from his model railway collection. The collection is almost exclusively Scotch whisky, although it has been sourced from as far afield as America, Iraq, Uruguay and Australia. 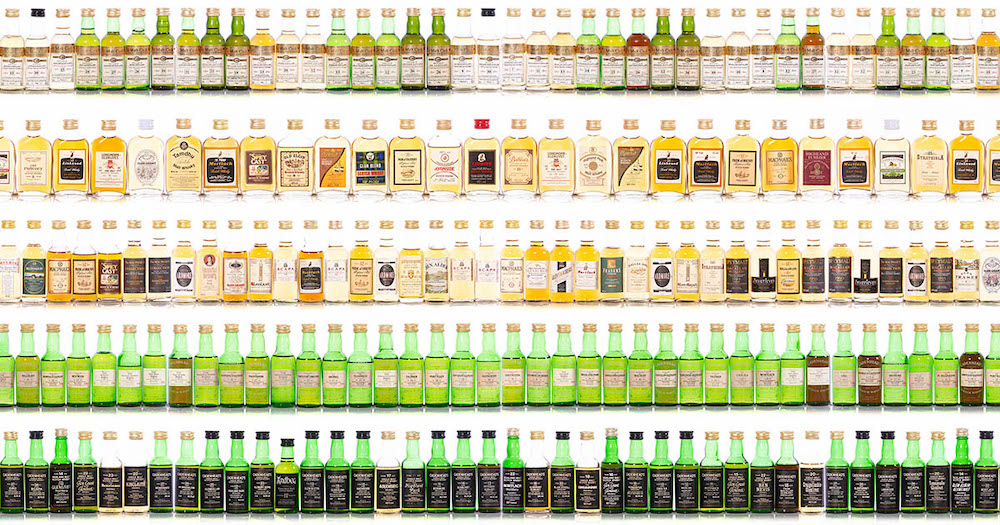 Standout lots in part one of the auction include presentation packs issued by Signatory Vintage of 1966 vintage whiskies, such as Laphroaig, Ardbeg and Macallan. There is also an extensive collection of The Whisky Connoisseur series and specialist bottlings from Gordon & MacPhail and Cadenhead’s.

Part two includes Brian’s unique collection of 120 bottlings of Ballantine’s whisky – each with a different label from around the globe and across the decades. There are also some treasures from the great powerhouses in whisky, such as a miniature bottle of Macallan 1961 commemorating Private Eye magazine’s 35th anniversary estimated at £200-£300 and a suite of bottlings from the Mini Bottle Club UK, of which Brian was a long-standing member. And no whisky auction this close to Christmas would be complete without a set of Bell’s Christmas decanters.

“We are very much looking forward to auctioning Brian’s incredible collection,” commented Gildings’ director and wine, whisky and spirits specialist Will Gilding. “With the fantastic gems on offer, connoisseurs and those looking for the perfect stocking filler for the whisky drinker in their life can be grateful that Brian’s passion lies in collecting rather than tasting whisky. Due to the sheer volume of the collection and the rare examples within it, we anticipate it will make between £25,000 and £35,000 over the course of the two auctions.”

Brian Marshall’s decision to sell is motivated by nothing more than the need to clear some space. “Most of the bottles are from the 1980s and 1990s because the distilleries stopped making as many miniatures after that. The last bottle I bought was at the Falkirk Wheel about five years ago,” he added. “I never had any aim in mind; I thought it all might be worth about £8,000 at the most, so I was flabbergasted when I heard it might fetch up to £35,000. But when my mates asked why I collect whisky miniatures when I don’t even like the taste, I used to say, ‘Well you buy cigarettes and at the end of the week all you have is a pile of ash, but I have my beautiful bottles to look at’.”

The auctions include almost all of Brian’s collection. “There were a few I struggled to part with including my 120 bottles of Ballantine’s,” he said. “I had to get one sent from Uruguay to complete that set so it would be nice if they stay in a cabinet for someone to enjoy looking at. But the only ones I’ve kept are a Rutherford’s Rolls Royce themed one and a set with every player from the 1968 Manchester United European Cup winning team.”

Not only is the auction unusual in scale, the fact that it is entirely comprised of miniatures means it will provide whisky lovers with a rare opportunity to sample whisky that might otherwise be unattainable.

“As the most sought-after full-sized bottles of whisky regularly sell in the hundreds or even thousands at auction, this is an ideal opportunity for people to try something new without risk or to treat themselves to something special at a comparatively affordable price,” added Will. “As well as the whisky itself, there are plenty other items of interest for whisky devotees, including a paperweight containing a drop from Grant’s one millionth barrel. There is also a rare 1887 book by Alfred Barnard, The Whisky Distilleries of the United Kingdom, which details every distillery in the land and describes techniques and methods of the late Victorian era and could exceed £300.”