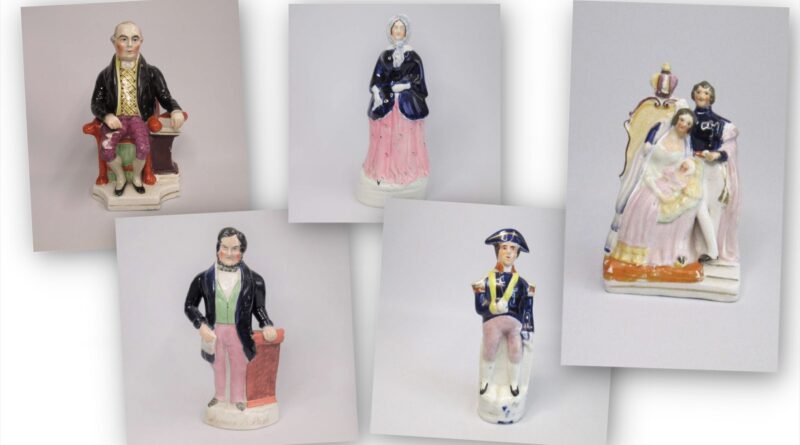 The late Dennis Silk CBE, warden of boys-only Radley College in Oxfordshire from 1968-1991, English first-class cricketer and close friend of war poet Siegfreid Sassoon, began amassing the porcelain figures in the late 1960s. And it was all sparked by his first find: a Queen Victoria figurine.

Dennis, who died at the age of 87 in 2019, was hugely admired. He gained national recognition in 1980 when he appeared in BBC documentary series Public School, and Eric Anderson, former head of Eton, regarded Silk as the best headmaster of his generation.

Now his collection of 261 ornamental Staffordshire figures, many from the Victorian era, will be offered by Hansons Auctioneers at Bishton Hall, Staffordshire on November 12. Such is the rarity of some of the items, it is anticipated the collection could sell for in excess of £20,000.

Dennis’s wife, Diana Silk, said: “It was in the summer of 1968 that Dennis, newly appointed warden of Radley College, went with a friend to look for a holiday cottage in Dorset. He returned without a cottage but with a large Staffordshire figure of Queen Victoria. That was the start of a lifelong fascination with Staffordshire portrait figures which gave him enormous pleasure over the next 50 years.”

However, notorious characters of the period were also captured for posterity. These include James B Rush, a tenant farmer hanged at Norwich Castle in 1849 after shooting dead his landlord. His figurine carries a guide price of £300-£500.

Another rare offering is the figure of Marie Manning, circa 1849, estimated at £200-£300. Manning (1821-1849) was a Swiss domestic servant who was hanged on the roof of London’s Horsemonger Lane Gaol in 1849. She and her husband were convicted of the murder of her lover, Patrick O’Connor, in a case known as the ‘Bermondsey Horror’.

Gillian Finney, Hansons’ Connoisseur Ceramics consultant, said: “It has been an honour and privilege to work on such a prestigious collection.”

Alan Sturrock, president of Staffordshire Figure Association, said: “It is a very comprehensive collection put together over some 40 or 50 years with the care and eye of a man who certainly loved and knew his subject.”