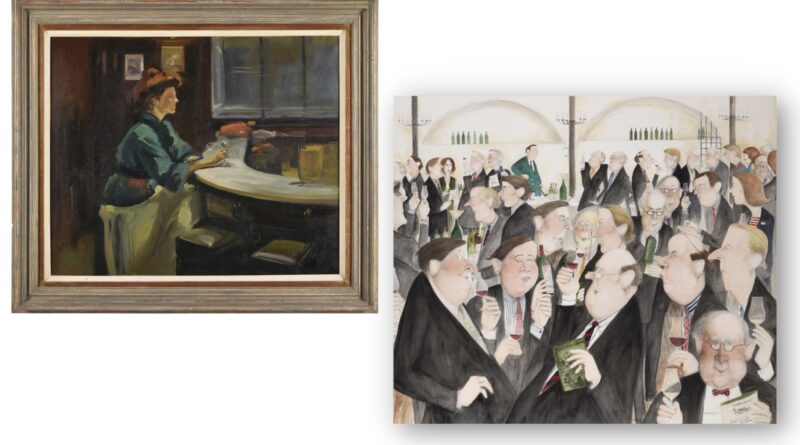 Art works that adorned the walls of the renowned Green’s Restaurant and Oyster Bar in St. James’, London are going up for auction this month.

The restaurant, which closed in 2016 after 34 years, was the creation of Simon Parker Bowles. As soon as it opened in 1982 Green’s became the haunt of TV personalities such as The Two Ronnies and writers and film directors, such as Michael Winner, alongside Hollywood actors, such as Sean Connery and politicians such as Margaret Thatcher.

Diners also included British and foreign Royalty, such as the Queen of Denmark, Princess Diana and Princes Harry and William, the Queen Mother and Princess Margaret, who is known to have commented to the staff that fishcakes should be square! Artists were also regulars, with some sketching on-site as they dined and others being specially commissioned by Simon Parker Bowles’ wife, Carolyn to create engaging artworks that would entertain and engage while people ate.

The restaurant became a ‘Who’s Who’ of London society with paparazzi capturing many as they entered or left, sometimes leading to the staff employing diversion tactics in order to deflect attention. One such incident was smuggling the comedian Dame Edna Everage (Barry Humphries) out over the fire escape, after his wedding reception at Green’s, to avoid the press camped outside.

Will Porter, specialist in charge of the sale, at Dreweatts, said: “Opening in 1985, Green’s Restaurant and Oyster Bar quickly became a St. James’s institution. Welcoming in Royalty and rogues alike, its’ impeccable service and comforting food attracted a global clientele. Dreweatts are delighted to be celebrating this wonderful institution through the art that hung on the restaurant walls and this auction gives people the opportunity to remember this fine restaurant through the fun and eclectic pictures that adorned this much missed establishment.”

Simon Parker Bowles told how his staff were like family and real-life caricatures, much-loved by Greens’ customers. One of his waiters, Manuel, “made the TV character of Manuel in Fawlty Towers appear competent.” There was also Peter Manzi, the oyster opener who built up a comedic rapport with his oyster-loving customers, popping fake pearls into the shells when the opportunity arose, much to the delight of the recipient.

The cartoonist Raymond Jackson (1927-1997), known simply as ‘JAK’, became a well-known figure and friend of the restaurant, as he spent many evenings until the early hours there, before heading home for what must have been only a few hours sleep, says Parker Bowles, before creating and submitting his latest cartoon to the Evening Standard, where he was resident political cartoonist. His popularity was such that Parker Bowles commissioned him to create the designs for the restaurant menus, among other works, some of which are included in this sale. One such work is cartoon titled ‘Your father’s always the same at the start of oyster season’, a typically British farcical scene, which carries an estimate of £50-£100 and another titled ‘Princess Di? Last week it was a flying saucer on the roof of your car!’ another equally amusing cartoon, estimated to fetch £50-£100.

A painting in the sale titled Wine Tasting is by award-winning artist, Sue Macartney-Snape (Tanzanian b. 1957), famed for her illustrated column ‘Social Stereotypes’ in the Saturday Telegraph. She was commissioned by Simon’s wife, Carolyn Parker Bowles to create the work and they both appear in the finished work, which took pride of place in the restaurant. It was an intriguing addition to the dining area and attracted much attention. Created in watercolour and pencil, it carries an estimate of £3,000-£5,000.

Commenting on the artworks Simon Parker Bowles said: “Every picture tells a story, they have been admired, commented on and been a backdrop to so many scenes – each has their own story to tell.” One of his particular favourites are two works by British artist Antony Bream (b. 1943), both titled ‘Lady at the bar, Green’s Restaurant’, they depict a lady sitting with a sole drink alone at the bar.

One is in simple charcoal and chalk and the larger version of the same scene, is in colour capturing the green leather banquettes, polished wooden bar and wood panelled walls synonymous with Green’s. Simon said: “The scene really makes the onlooker think; what is she doing there, who is she waiting for, what is she thinking. It’s an intriguing, mesmerising work that was perfect for the restaurant, the colour version capturing every detail, even down to the bag hooks under the bar and the gleam of the green leather pads on the bar stools”. The charcoal work has an estimate of £800-£1,200 and the oil on canvas version is estimated at £1,500-£2,500.

Some art works stand out as a mirror into Green’s at one particular moment in time and one such work is the Portrait of Peter Langan by Raymond Jackson ‘JAK’ (British 1927-1997), drawn on a napkin while in the restaurant, signed, inscribed and dated ‘Peter Langham by JAK Drunkenly (both), Green’s. The rough sketch perfectly captures the character of Irish entrepreneur Peter Langan (who founded Langan’s Brasserie in Mayfair with the actor Michael Caine in 1976). Langan was a regular at Green’s and once had to be ejected for going too far in insulting one of the restaurants leading composers, who was also one of their best customers. The sketch of him is estimated to fetch £300-£500.

While the art works are going and the staff are long gone, Simon said his fond memories of Green’s will live on and the amount of them is quite extraordinary, he recounts for example refusing entry to Charles Saatchi and the film star Steve Martin as they weren’t wearing ties, something which on reflection he finds amusing, as the rule was later relaxed. He also recalls an incident where two Canadians had travelled all the way from Canada to come the restaurant in the hope of meeting their two favourite TV comedians, ‘The Two Ronnies’. “When inside the restaurant they gazed across the dining room to see Ronnie Corbett lunching with The Queen Mother! To say it made their day, meeting their favourite celebrity and British Royalty in one, was an understatement.”

The artworks are being offered in an online sale titled If Pictures Could Talk: The Art of Green’s Restaurant and Oyster Bar, which is open for bidding now until December 15, 2021.