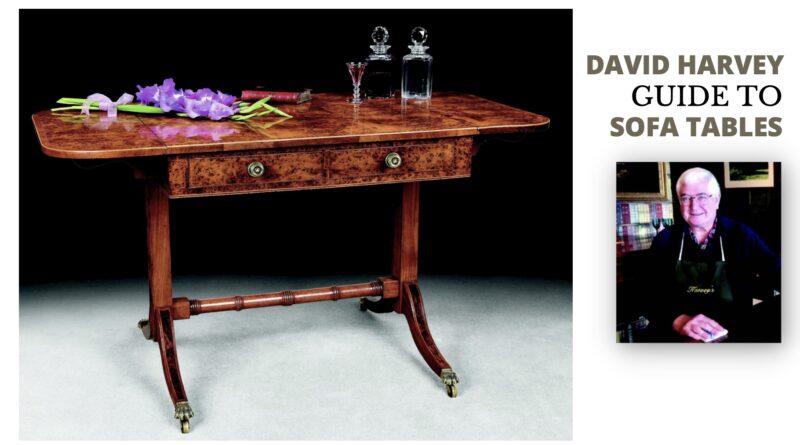 Evolving from the Pembroke, sofa tables were all the rage in Regency interiors. David Harvey considers what they were and what you should look for when considering a purchase

While the first sofa tables date from the end of the 18th century, it was Thomas Sheraton (1751-1806) who first wrote about them in his The Cabinet Dictionary published in 1803. They are a variant of the Pembroke table, which he described as “a name given to a kind of breakfast table from the name of the lady who first gave orders for one of them.”

But there is a difference: a Pembroke table has drop leaves on its longer sides, whereas a sofa table has the leaves on the shorter sides.

Later in his dictionary, Sheraton describes a sofa table as: “Those used before a sofa and are generally made between 5 and 6 feet long and from 22 (inches) to 2 feet broad; the frame is divided into two drawers as shewn in plate 74 where is also the design of a sofa that a stranger may more clearly see the use of such tables. The ladies chiefly occupy them to draw, write or read upon.”

Whereas Sheraton has the sofa table in front of the sofa, a century later it had become the habit to place the table behind the sofa.

This could be the result of a change in our way of living since the Georgian period – while the fireplace may still be a room’s focal point, it may no longer be the only source of heat and light in a room.

It is also interesting to see, in the version above, two frieze drawers. These are presumably false drawers as any lady seated on the sofa would want to be able to access the ‘real’ drawers on her side of the table.

The ring turnings on the central stretcher are typical of the late 18th and early years of the 19th century, helping us to date the table to close to 1800.

We see this on different pieces where a central column supports a top – as on a tripod table, or work table. This is reinforced by sabred legs joining the uprights without any hint of a ‘knee’.

By the middle of the Regency period, sabred legs on tables had developed a roll which sat on top of the joint, which was often carved with foliage.

Another of the table’s nice touches is the single-minded approach of the brass fittings on the drawer pulls which have lion’s masks on them.

This motif is echoed on the feet and casters, which are in the form of lion’s paws.

Another indication of the age is the graduation of colour as you look down a piece. I would expect the burr yew wood used on the top to have faded slightly, compared to that of the frieze and bases.

Yew is an incredibly slow-growing tree, most often found in church yards and cemeteries, so to find the quantity of burr yew used on this table is rare indeed.

When this was made all timbers would have been cut by hand. I would not expect the top veneer to be from one section and, if you look very closely at the table, you should be able to make out the almost imperceptible joints.

Every time I look at this wonderful sofa table my heart sings with the enjoyment a piece of this calibre and originality can bring.

When I consider a piece of antique furniture I am looking for consistency.

Do the bandings match all parts? Are the veneers consistent all the way through? Has one person, or company, been responsible for the production of the piece?

There are numerous ways to check this out. Compare the similarity of the triple line inlay around the top of the table to the same inlay on the legs of the piece.