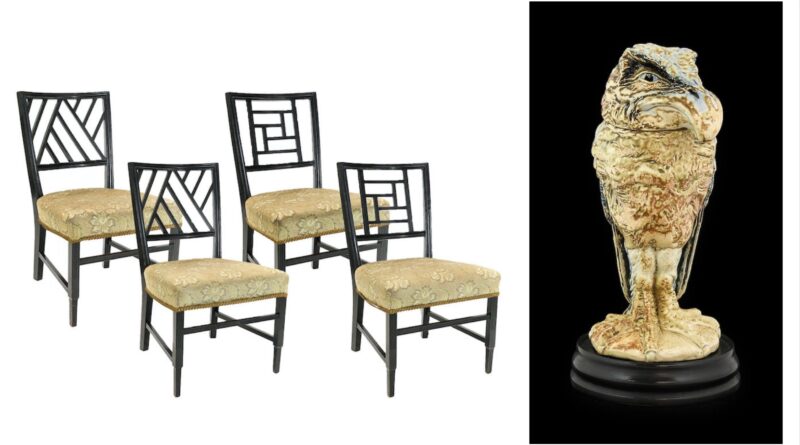 A rare Martin Brothers’ ‘Wally Bird’ jar leads Tennants Auctioneers’ 20th-century design sale on February 26, which is set to include pieces by some of the leading artists, designers, and makers of the era, such as Eric Ravilious, Edward William Godwin, Christopher Dresser and Arne Jacobsen.

They are joined by unique lots with good provenance and a wide selection of furniture and furnishings by Robert ‘Mouseman’ Thompson and the Yorkshire Critter Carvers.

Martin Brothers is one of the most significant names in the history of British pottery. Four brothers, working in London, conjured up idiosyncratic, whimsical creations that would represent the peak of Victorian art pottery and the beginning of 20th-century studio pottery. For collectors, their wares, which teeter between comical and dark, remain amongst the most sought-after pots two centuries on. 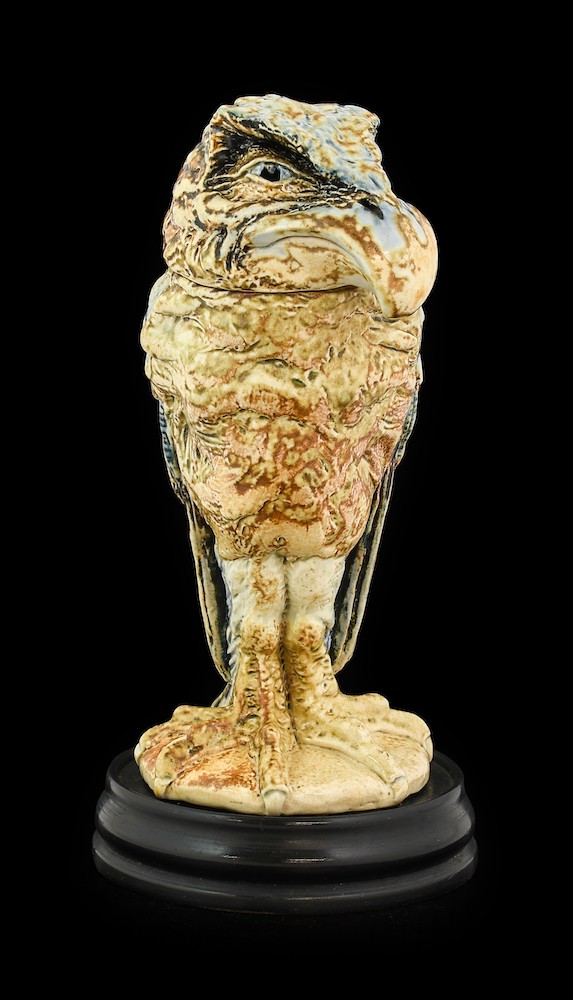 However, it is their iconic ‘Wally Birds’ for which they are best remembered. Stoneware tobacco jars and covers by Robert Wallace Martin in the form of anthropomorphic birds, standing erect and full of character with sly expressions or mischievous grins. Often the birds represented figures from Victorian society, from barristers and admirals to urchins off the street. It is these birds that remain the most desirable pieces of Martinware on the market today, with the most characterful figures commanding the highest prices.

Standing in stark contrast is an opulent Hollywood Regency style floor lamp modelled in lacquered brass and pewter as a date palm tree, estimated at £3,000-£5,000). Thought to have been made in the 1970s by a fabricating specialist Lance Thomson in the South of England, it was commissioned by Philip and Stephanie Asher for their Party Room at Nurayla, Chilworth Road, Southampton. The Hollywood Regency Style is marked by lavish glamour with a sense of humour, redolent of the Golden Age of Hollywood from 1930-1950. 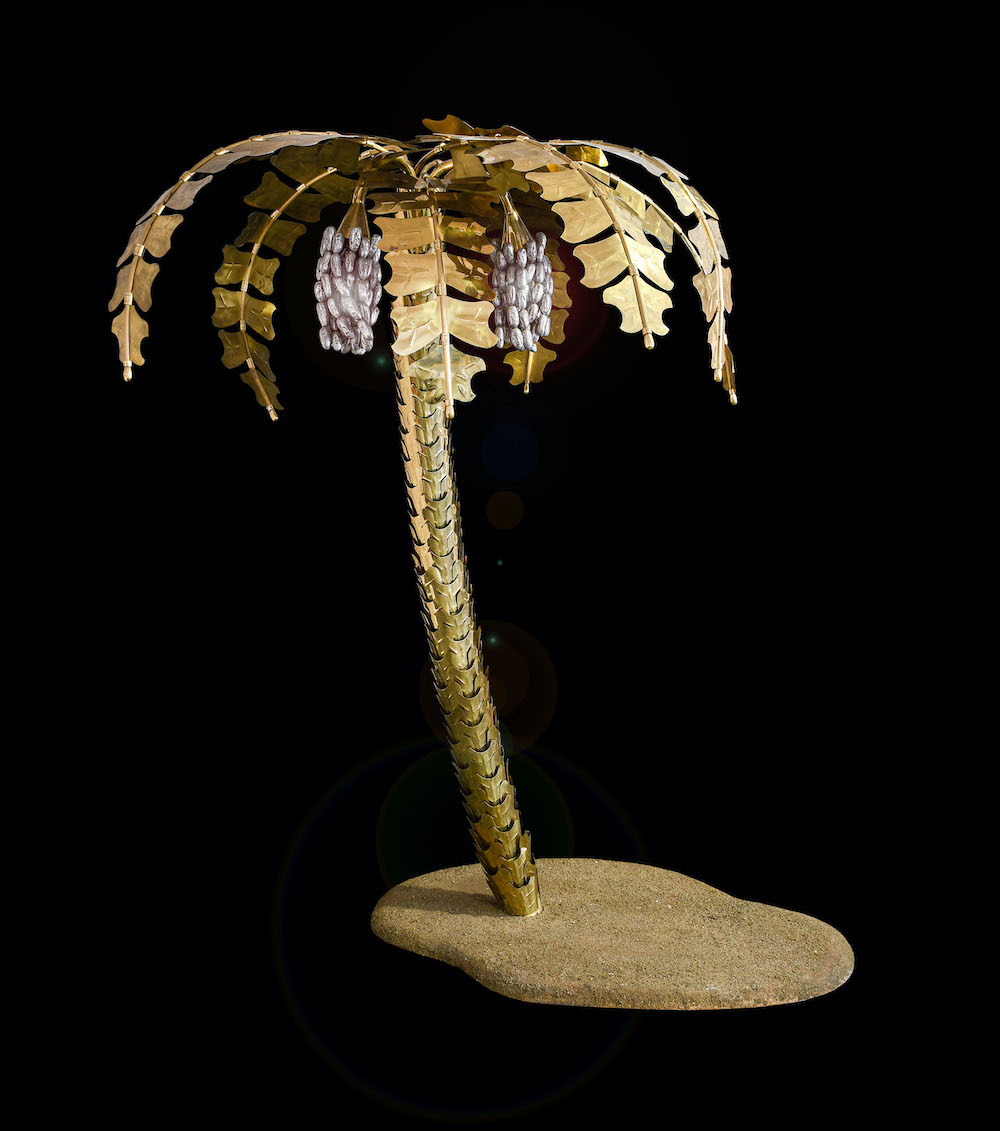 Four Anglo-Japanese ebonised beech side chairs designed by Edward William Godwin (1833-1886) and retailed by William Wyatt, are being sold individually, each with an estimate of £1,000-1,500. The chairs have two different patterns to the lattice backs, the design of which was included in Susan Soros’ monograph on the designer. Godwin was an architect-designer who was fundamental to introducing the Anglo-Japanese style, which would become central to the Aesthetic Movement. 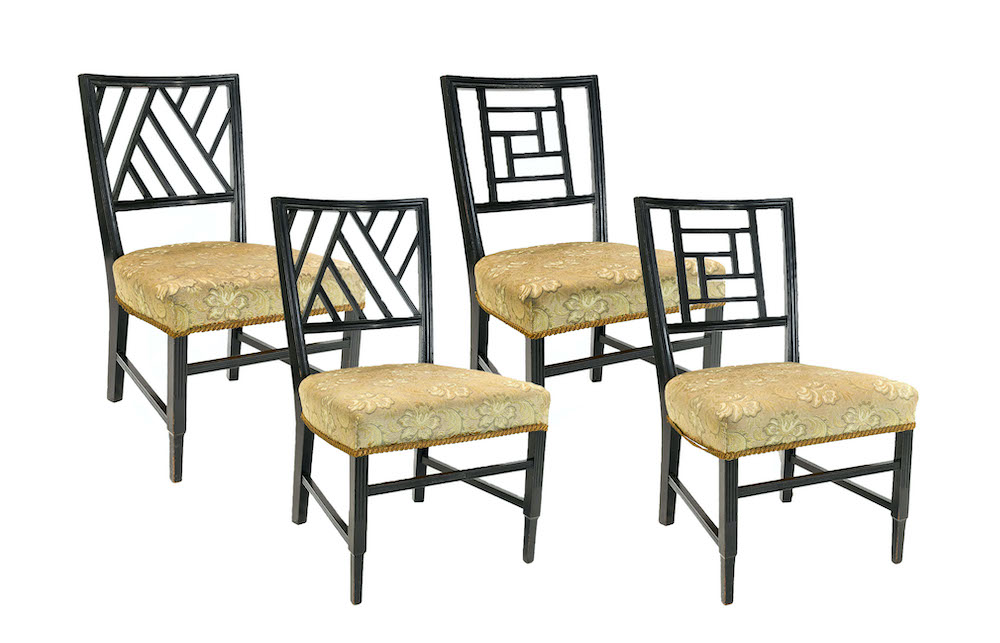 A copy of J. M. Richards High Street, illustrated by Eric Ravilious and capturing life on the English high street during the interwar period is on offer with an estimate of £1,000-1,500, alongside a Wedgwood dinner service from the same collection, decorated with Ravilious’ ‘Travel’ designs on a Windsor Gray ground. The service comprises 25 pieces and is sold with an estimate of £1,000-1,500.

Amongst the more unusual lots in the sale is a notebook, which once belonged to John Beswick, owner of the Beswick Pottery. Dated April 1893 and signed by Beswick, the notebook contains handwritten recipes for colours, bodies and glazes, including Jet glaze, Common Rockingham glaze, and Bamboo brown glaze. The book, which is offered with an estimate of £250-350, and was given to the vendor by Beswick’s granddaughter Judith Mary Stonestreet (née Beswick), who was married to the vicar of Askrigg, Wensleydale.

Of interest to collectors of ceramics is a Bunnykins Oval Tray hand-painted to celebrate a wedding in 1958 by the Bunnykins creator Mary Barbara Bailey. The tray is accompanied by a document with three watercolour Bunnykins illustrations and inscriptions and a group of Royal Doulton Bunnykins Nursery Wares, the whole offered with an estimate of £200-300.

Further highlights in the sale include a private collection of Whitefriars Glass, including an unusual quantity of ‘Banjo’ vases in rare colours such as Aubergine. The collector, from the North East of England, is a glazier who loved colour, seeking out unusual pieces. A good selection of Art Deco pieces is led by a ‘Master Incolor’ cocktail shaker, which has a rotating collar to the cap giving recipes for eight classic cocktails and offered with an estimate of £200-300.