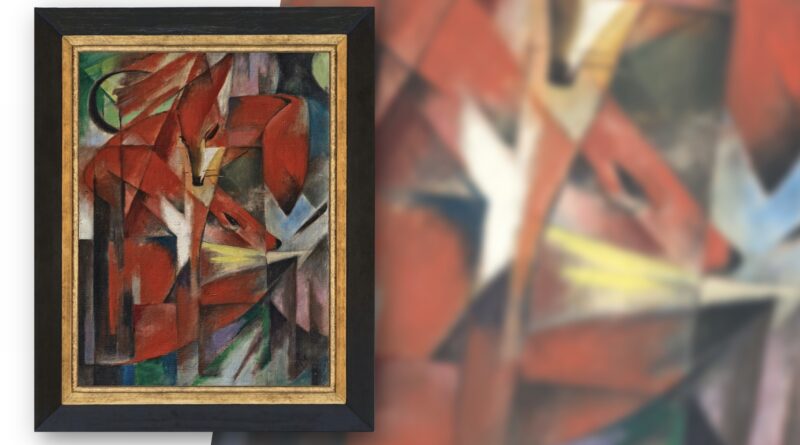 The painting is set to be the centrepiece of Christie’s 20th/21st Century: London Evening Sale, a key auction within the 20/21 Shanghai to London series, which launches the auction house’s major international sales of 2022.

Filled with a vivid play of vibrant colour and prismatic form, The Foxes is a masterpiece of German Expressionism, which has graced several great collections over the course of its life, most recently the Kunstpalast Museum in Düsseldorf, before its restitution to the heirs of Kurt and Else Grawi. 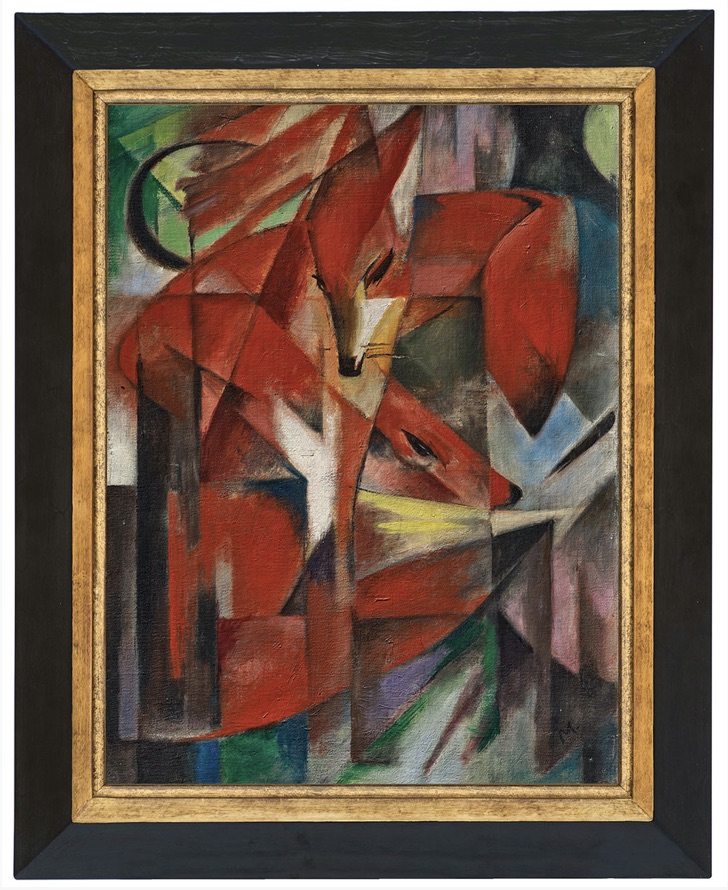 Painted in 1913, at the critical moment when Modernist movements were booming across Europe, it is among the most accomplished of the artist’s pioneering avant-garde paintings. The Foxes reveals the bold experimentation of Marc’s revolutionary artistic idiom in the last full year of his artistic career, before his untimely death in the First World War.

Jussi Pylkkänen, Global President, Christie’s: “It is a huge honour for Christie’s to be entrusted by the Grawi family with the sale of a painting of such art-historical importance. Marc, along with Wassily Kandinsky, was a trailblazer of the European avant-garde at the beginning of the 20th century who challenged and completely overturned many of the accepted maxims of classical painting.

“The Foxes encapsulates everything that we find inspiring about Marc’s work: it has dynamism, sensational colour, incredible balance and a spirituality in its sublime subject which completely draws the viewer into the painting. Aside from its unquestionable beauty, it is a work with an extraordinary history, both of ownership and of exhibitions, having featured in so many important avant-garde shows over the past 100 years. I have had the pleasure in my career of handling several extraordinary Modernist paintings from this period, including Kirchner’s Berliner Strassenszene of 1913 and Modigliani’s Nu couché of 1918. This magnificent Franz Marc stands shoulder to shoulder with those celebrated paintings, which both made such extraordinary records when they came for sale over the past twenty years. This is a painting that will be chased by the world’s greatest collectors.”

Keith Gill, Head of Impressionist and Modern Art, Christie’s London: “There is a long tradition of Christie’s selling the very best German art in London, continuing this March with the sale of Franz Marc’s The Foxes, a work that truly defines Modernism in the 20th century. A painting by Marc of this pedigree, date and quality has not appeared on the open market for over fifty years. There is no doubt that Marc sits alongside the masters of Western art, his visionary paintings paving the way for the artists who followed in his steps, from the 1920s through to the contemporary artists of today. We are delighted to offer our colleagues and our clients an opportunity to view this iconic painting as it is toured internationally for the first time in more than 20 years.” 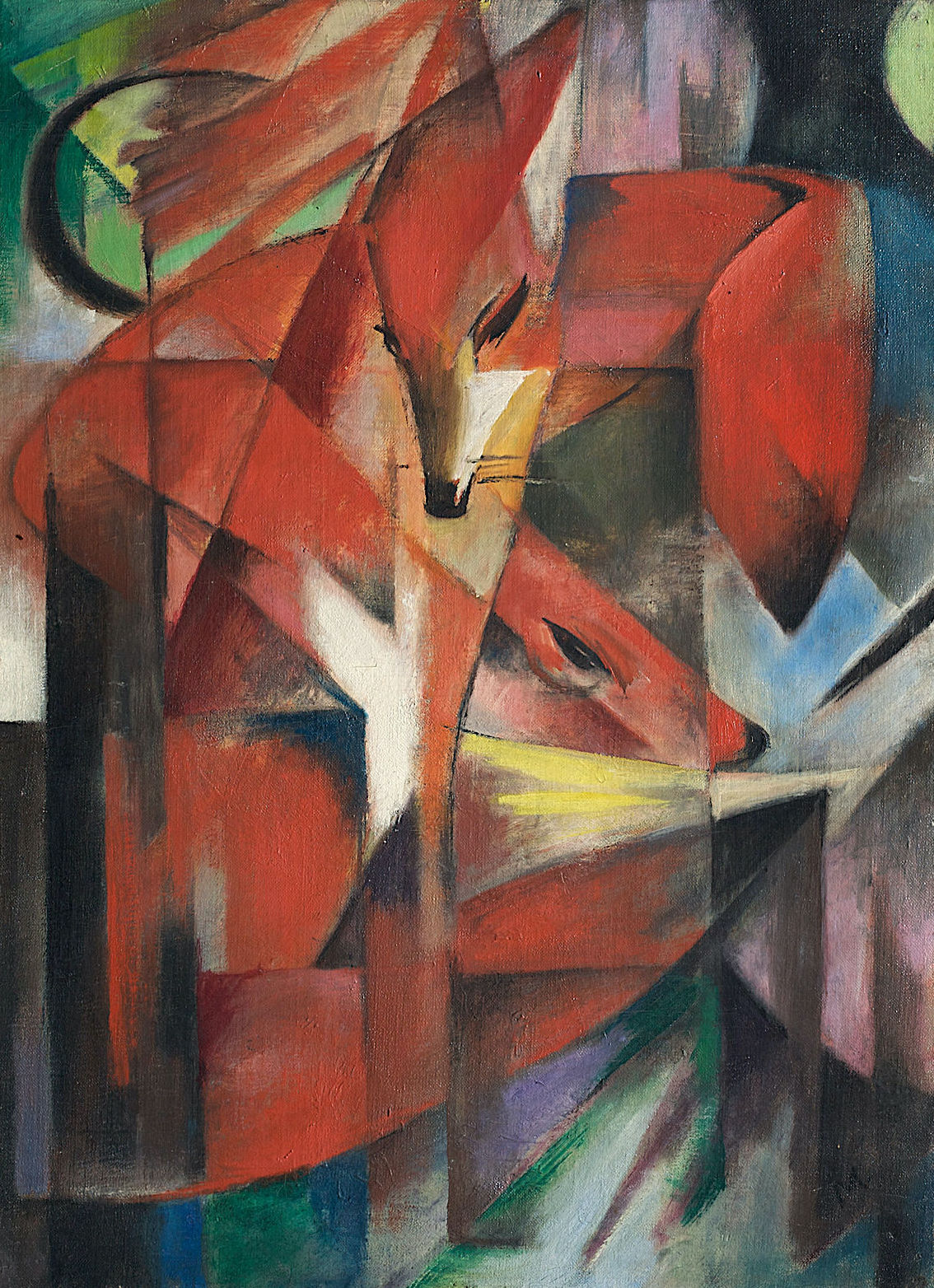 Depicting a seemingly idyllic scene, in which two foxes are woven together in a kaleidoscopic pattern of brightly-hued interpenetrating and intersecting lines, The Foxes illustrates the important developments that were occurring in Marc’s oeuvre during this period. 1913 marked the penultimate year of one of the most daring, revolutionary epochs in the history of art, as the seismic shifts that had transformed creative thinking since the beginning of the 20th century reached new heights.

From the Cubists and Orphists in France, to the Futurists in Italy, the Rayonists in Russia, and the Die Brücke and Der Blaue Reiter movements in Germany, the European avant-garde was at its inventive peak between 1910 and 1913. A founder of Der Blaue Reiter with Kandinsky, Marc was deeply familiar with all of these new movements, tracking their latest evolution and progress through exhibitions, avant-garde journals and a rich network of friends and colleagues across the continent.

From late 1912 onwards, Marc began to adopt an increasingly dynamic, geometric approach to form in his paintings, most notably in response to the work of Robert Delaunay and the Italian Futurists. He sought to overcome a static, fixed view of the world and bring us closer to an understanding of the hidden forces of nature. His works from 1913 are imbued with a distinct spirit of innovation and experimentation and convey the artist’s unique ability to marry these new vocabularies with his own distinct vision. Writing to his friend August Macke shortly after The Foxes was completed, Marc proclaimed of his latest paintings: ‘I truly believe I’ve made progress. It must be something. I feel very differently about things; I believe there is more absolute compulsion in them…’ (letter to Macke, 22 May 1913).

Marc clearly felt that The Foxes stood as a key example of his most recent painterly achievements and chose to include it in a number of early exhibitions, from his travelling solo-exhibition in 1913, to the major Moderne Kunstkring show at the Stedelijk Museum in Amsterdam later that year.

After the artist’s death at Verdun in March 1916, The Foxes passed into the possession of his widow, Maria Marc, who would later write that the painting was one of her “very special favourites” among her husband’s work, and of her regret at selling the painting in the same year to the esteemed avant-garde gallerist Herwarth Walden. During Walden’s ownership it featured in the pivotal 1916 exhibition Expressionisten, Futuristen, Kubisten: Dreiundvierzigste Ausstellung, curated by Walden at Der Sturm, and was also included in the major retrospective exhibition of Marc’s work organised by the Munich Neue Secession immediately after his death.

In the decade that followed, The Foxes passed through the esteemed collections of Franz Kluxen, who also owned Marc’s famous composition Die Gelbe Kuh (Solomon R. Guggenheim Museum, New York), and Max Leon Flemming, a Hamburg-based art patron and businessman. In 1928 Flemming sold The Foxes to Kurt Grawi, a German-Jewish banker living in Berlin, and his wife Else. The painting became the highlight of their collection.

Following the National Socialist rise to power in 1933, the Grawi family suffered immensely under the repressive anti-Jewish measures imposed by the regime. Forced to flee Germany after the Kristallnacht pogrom and a period of internment in Sachsenhausen concentration camp in 1938, Kurt successfully smuggled The Foxes out of the country to the United States in 1939. He then made concerted efforts to sell it, in order to facilitate his family’s survival and emigration. In 2021, the painting was restituted to the heirs of Kurt & Else Grawi from the Kunstpalast Museum in Düsseldorf.