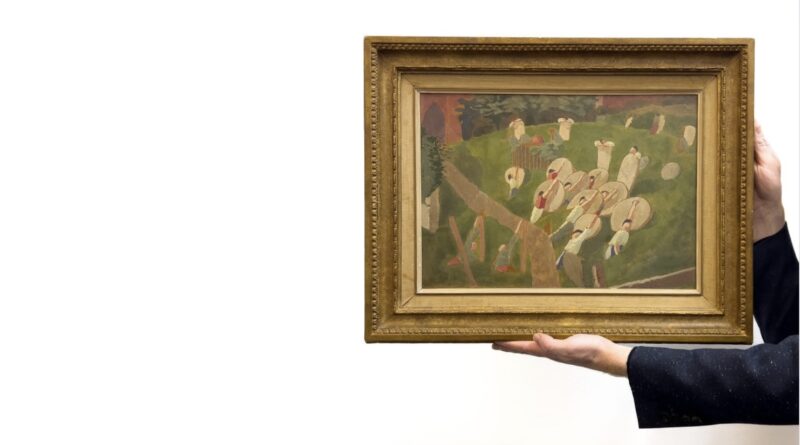 Roseberys Fine Art Auctioneers in London is to offer 351 lots of Modern & Contemporary British & Irish Art to the market on Tuesday 15 February, starting at 10.30am.

Included, amongst the many highlights in the sale is a Portrait of Dorette by Gerald Leslie Brockhurst and work by essayist, parodist and caricaturist, Sir Max Beerbohm. A strong theme that runs prominently throughout the auction are exceptional works by Scottish artists, including William McTaggart, John Bellany, Dame Elizabeth Blackadder, Joan Eardley, John Houston and Peter Howson.

Head of Sale, William Summerfield commented: ‘This sale has an intriguing range of exciting items, from a hand-illustrated book by Sir Max Beerbohm, to a Glasgow pastel by Joan Eardley and even a small drawing made by the late Rolling Stone’s drummer (and trained artist), Charlie Watts, for an auction organised by Brian Eno. The Gerald Leslie Brockhurst drawing is an extremely rare find, that is a joy to be offering for sale.’

(Lot 35) John Bellany CBE RA HRSA, Scottish 1942-2013 – Three figures at a table, c.1970; oil on canvas, comes with an estimate of £10,000- £15,000. One of the most celebrated Scottish artists of the 20th century, Bellany’s deeply symbolic work contains an unrivalled intensity and power. Using a distinctly Scottish iconography, Bellany’s works explore questions of the human condition, Celtic history and our relationship with the sea. Alongside Alexander Moffat and the poet Hugh MacDiarmid, Bellany sought to create a renaissance in Scottish culture from the 1960s. Inspired by the symbolism of Alan Davie, his work has also been highly influential on a generation of artists, including Damien Hirst, who has been a major collector of his work.

(Lot 7) Offered to the market with a pre-sale guide price of £8,000- £12,000, is a portrait of Dorette, in black chalk on paper by Gerald Leslie Brockhurst ARA RE RP, 1890-1978. Dorette was the artist’s nickname for the model Kathleen Woodward, who became his muse and later his second wife, appearing in many of his works. His portraits of Dorette, from the 1930s, are particularly known for demonstrating the influence of Leonardo da Vinci’s Mona Lisa on the artist, seen here in the piercing yet sensual gaze of the sitter. During this period, Brockhurst also made celebrated portraits of well-known figures including the film stars Merle Oberon and Marlene Dietrich, and Wallis Simpson, the Duchess of Windsor (now in the National Portrait Gallery). Portraits of Dorette are held in public collections including the Harris Museum & Art Gallery, Preston, the McLean Museum and Art Gallery, Greenock, the Lady Lever Art Gallery, Wirral and the Metropolitan Museum in New York.

(Lot 34) Joan Eardley RSA, Scottish 1921–1963 – Scene near Port Dundas; watercolour, ink and pastel on two joined pieces of paper, comes with an estimate of £8,000- £12,000. Measuring 14 x 21.43 cm, this work comes with a provenance with New Charing Cross Gallery, Glasgow; private collection. Eardley’s work combines an energetic, often visceral handling, with a deep sense of truth, creating some of the most honest and moving images of the 20th century. The present work demonstrates her unique take on the urban landscape of Glasgow, where the artist lived during the 1950s, creating some of her most enduring works. This work on paper has been in a private collection since the 1960s.

Following this auction, Roseberys are delighted to announce they will offer works from the descendants of Arthur Tooth & Sons gallery which ran 1842-1972 on Monday 21 February, starting from 2pm.

This sale will be on view at the same time as the Modern & Contemporary British & Irish Art auction that will take place on Tuesday 15 February.

Arthur Tooth & Sons was a leading art gallery located at no. 5 & 6 Haymarket in London, founded in 1842 by Charles Tooth, a carver and framer, in order to set up his son Arthur in business. Arthur Tooth also had a New York location from around 1900 until 1924, as well as a branch in Paris. In the mid-1920s, Dudley Tooth (1896–1972) took up leadership of Arthur Tooth & Sons and rebranded the gallery, expanding within the pool of contemporary artists and further promoting artists by regularly hosting a solo show of each artist’s work every two and a half years.

Like other larger dealers, Tooth also published prints which helped them develop the business further. The Arthur Tooth & Sons gallery was renowned for being forward-thinking in their business practices and in the vanguard of introducing French Impressionism to the British market.

They also specialised in Venetian paintings, in particular, works by Canaletto and Guardi. During their operation, the gallery had established a significant presence in the art world and supplied works to major collectors around the world, including industrial magnate Henry Clay Frick with works by Lawrence Alma-Tadema, Jean-François Raffaëlli, J. M. W. Turner, Frits Thaulow, Pascal Dagnan-Bouveret, and Rembrandt. The London gallery closed in the 1970s.

Tess O’Brien, Head of Sale commented: ‘This collection reflects the narrative of the Arthur Tooth & Sons gallery, we have pieces from the 1800s to the 1970s. The sale includes works by renowned artists along with prints and catalogues published by the gallery over the years. I think what is of particular note is to be able to offer a collection of works that have not been on the market since they appeared in the gallery or in museums over the years. We are honoured to be working with this art dynasty.’

Leading the sale is an oil and pencil laid down on board, measuring 30.9×43.8cm, by English painter Sir Stanley Spencer CBE RA, 1891-1959, titled The Resurrection, painted in 1920, estimated to make between £100,000-£150,000. Shortly after leaving the Slade School of Art, Spencer became well known for his paintings depicting Biblical scenes occurring as if in Cookham, the small village beside the River Thames, where he was born and spent much of his life. As a devout Christian,

Spencer believed in a joyful day of resurrection where everyone would be raised from the dead to receive judgement or glory. The Arthur Tooth & Sons Gallery originally acquired the painting from artist Henry Lamb, who was a friend and patron of Spencer, the pair met in 1913. Both artists served in the war together. Spencer’s masterpiece and perhaps most famous work, The Resurrection, Cookham, 1924–27, owned by the Tate Gallery, was made in a Lamb’s studio in 1922, suggesting why he may have owned the present work previously. The work on offer at Roseberys was exhibited in the 1980 ‘Stanley Spencer’ exhibition at the Royal Academy of Arts,’ and ‘Stanley Spencer’ at the Tate in 2001.