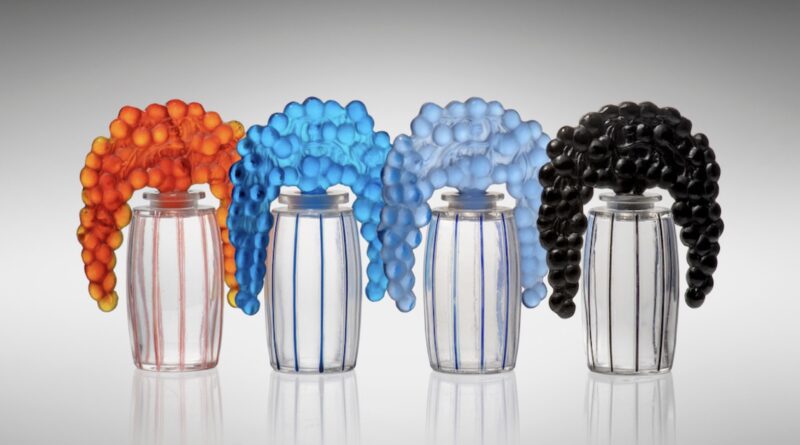 An exceptional private collection of 150 Lalique perfume bottles proved a near sell-out at London auctioneers Lyon & Turnbull’s recent live online auction. Many bottles brought record sums as the collection, assembled over several years by a collector who had long fallen under the spell of René Lalique, sold for a premium-inclusive total of £658,000. 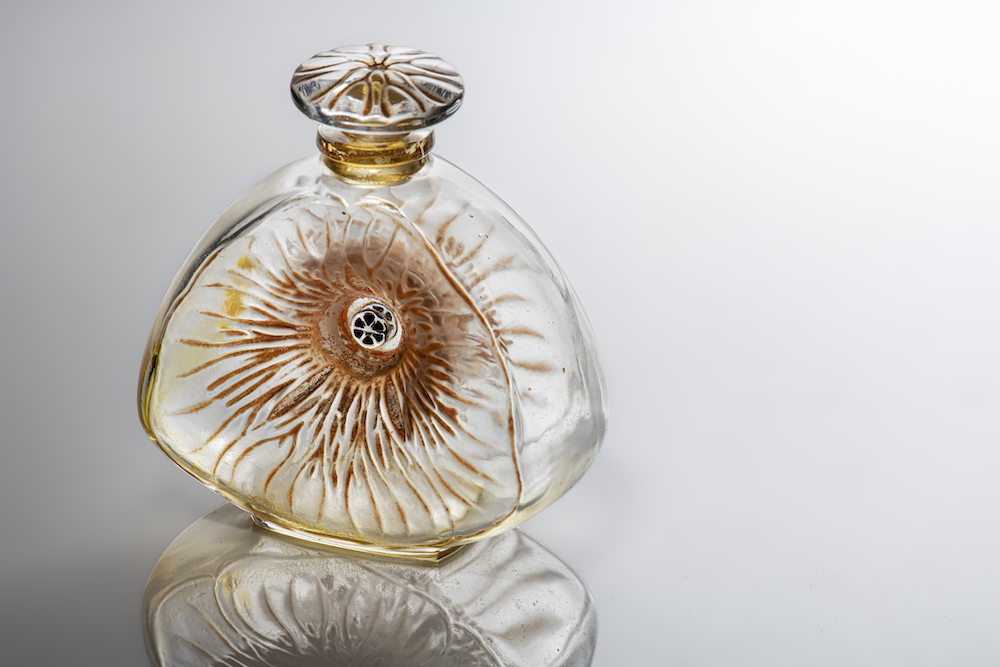 “It is a rare occurrence for a collection of Lalique scent bottles of this calibre and scale to appear on the market and I was thrilled to be asked to handle it”, said Joy McCall, Senior Specialist and Head of Sale. “The results are testament to the quality of the collection. Participation in the sale came from a broad international audience and it was lovely to meet so many new clients with a passion for Lalique.”

It was in the early 20th century that Lalique turned his attention from handmade jewellery to making glass by industrial methods. Some of his first creations were for the perfumier François Coty, his neighbour on the place Vendôme in Paris, who believed success in the fragrance business lay in beautiful packaging and an affordable price. Ever since Lalique designed the Cyclamen bottle for Coty in 1909 (an example sold during the sale at £2500) the perfume industry has invested heavily in bespoke packaging. Lalique designed bottles – each a small masterpiece in terms of aesthetic beauty and quality of execution – for more than 60 perfumers, fashion houses and department stores plus bottles for his own Maison Lalique brand. Altogether approximately 400 models were made.

Some bottles made for Maison Lalique were created in multiple colour treatments or finishes. Four versions of the 1920 Amphitrite bottle formed as a nautilus shell with a sea goddess stopper sold for prices between £1,625 (green) to £4,250 (electric blue).

The Bouchon Cassis bottle, also designed in 1920, with its stopper formed of cascading bunches of currants was also offered here in four different colours guided from £2000-9000. They sold for sums between £5,250 (orange) to record sums of £18,750 each for bottles in clear blue and black. 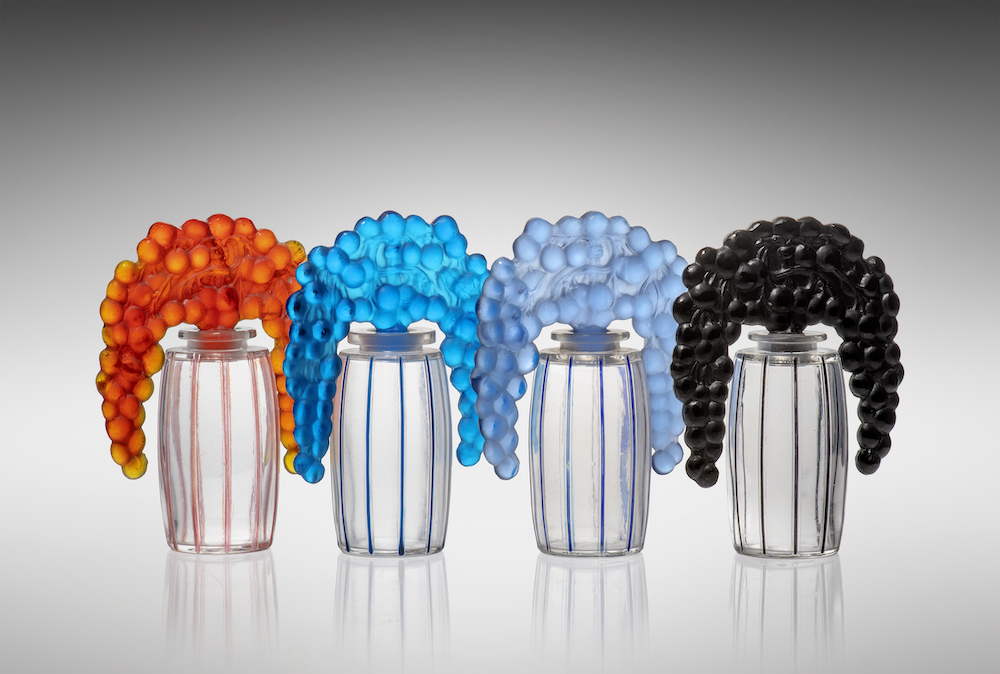 The similar Bouchon Mûres (Blackberries stopper) bottle sharing the same base, also in black and clear glass, was deemed rarer still. It sold at £27,500.

Fougères is French for ferns but also the name given to one of the main fragrance families. It was the perfect subject for a bottle Lalique designed in 1912 that featured medallions of a woman wearing revealing clothing within a border of fern leaf fronds. The model is known in several colour ways – this one in clear, frosted and jade green glass selling for a remarkable £27,500. “Fougères was one of my favourite bottles in the collection and it realised a wonderful record result“, commented Joy McCall. 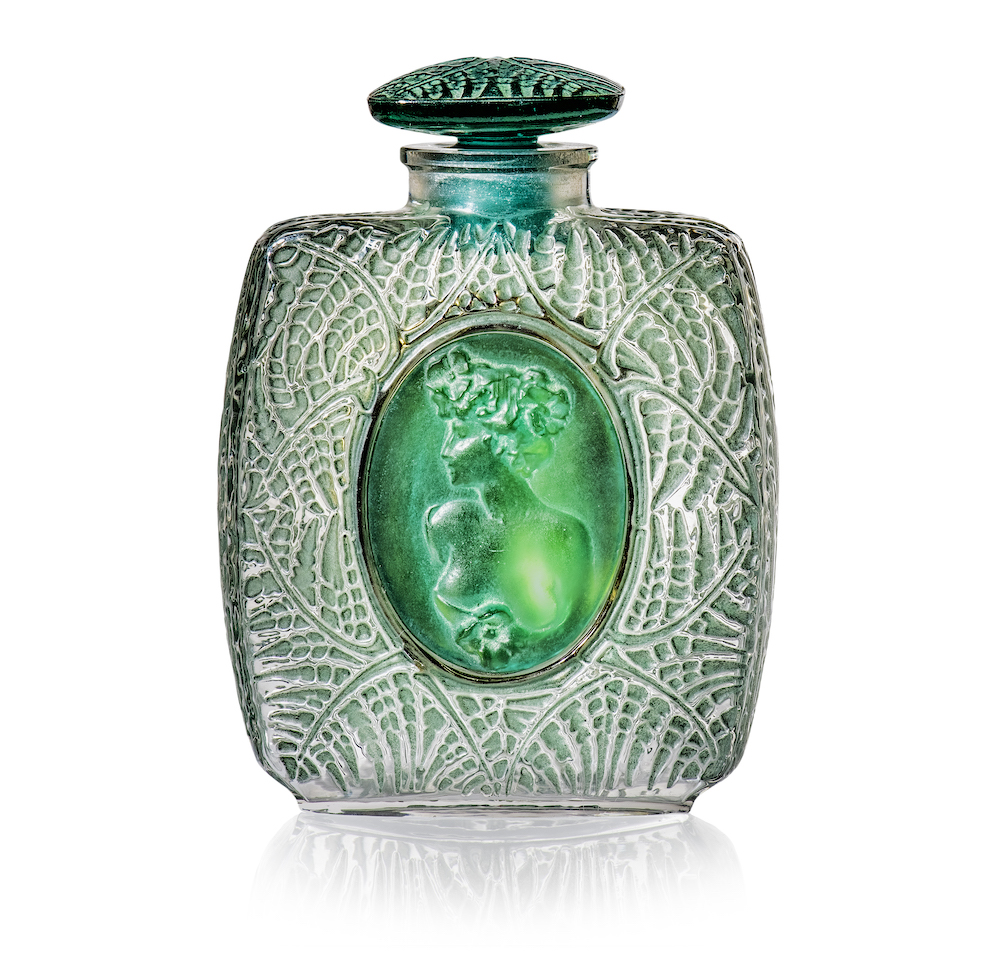 The same sum was paid for a similarly technically challenging bottle that again survives in only small numbers. The complex Althea bottle designed in 1911 was probably never put into full production. Made in clear glass with sepia staining and black enamel highlights, it sold for £27,500 – a record for the design. While Lalique’s most detailed designs typically hold the greatest appeal, this collection included some of the hardest to find bottles – many of them made for French and American perfumiers in the 1920s. Joy McCall, said: “The collection was formed in equal measure by a great passion for the subject and the thrill of the chase when searching for the rarest bottles.”

Among the most admired lots in the sale was the Petalia bottle featuring a central design of the face of a Pierrot. This 1923 bottle in clear, frosted and grey stained glass was made for the American cosmetics magnate Ewing Virgil Neal, founder of the brand Tokalon, and used to house two fragrances Petalia and Captivant de Tokalon. “It was the first time I have offered one for sale in three decades of selling Lalique and its didn’t disappoint selling at £25,000,” said Joy McCall.

Made in an edition of just 200, a Cadeau de Paques egg-form scent bottle produced for Worth in Easter 1928, estimated at £600-£900, sold for £11,875 while a seldom-seen bottle with the Spirale Fougère (fern spiral) or Scent Bottle HC 12 as now listed in the catalogue raisonne, designed in clear, frosted and sepia stained glass sold at £17,500. The latter was created by Lalique in 1925 for an unknown perfumer and the product probably never marketed.

The Ambre du Cap scent bottle was designed 1920 for Volnay (founded in 1919 by René Duval) and later supplied to luxury Paris department store Galeries Lafayette. Made in clear, frosted and sepia stained glass with an applied gilt paper label for Lafayette, it was estimated at £1,500-£2000 but sold at £20,000. “This was the result in the sale which most surprised me. I knew it was a rare bottle but had not anticipated such a frenzied bidding war occurring for it,” said Joy McCall.

The Oviatt department store in Los Angeles was completed in 1927 – its interiors featuring Lalique glass panels. To mark the opening of the building, and the launch of the scent Le Parfum des Anges, Lalique created a small bell-shaped perfume bottle incorporating the seal of the City of Los Angeles within the design. The 1926 grey and sepia stained bottle incorporating the name Le Parfum des Anges sold for £17,500 – a record price for this hard-to-find variant.

Also sold at £17,500 was Le Corail Rouge (Red Coral), a vessel designed in 1922 for the launch of the Forvil perfumery. Founder Léo Fink became a regular customer of Rene Lalique who designed both his packaging and shop displays. Remarkably, this clear, frosted and red enamel bottle came with its original card box, so often discarded a century ago. “I sold an example of this bottle in 2018 for £7500 without a box and it was lovely to see the way the enamelled design on the bottle is mirrored in the packaging,” observed Joy McCall. “It shows too just how much the survival of an original box can influence the price”.