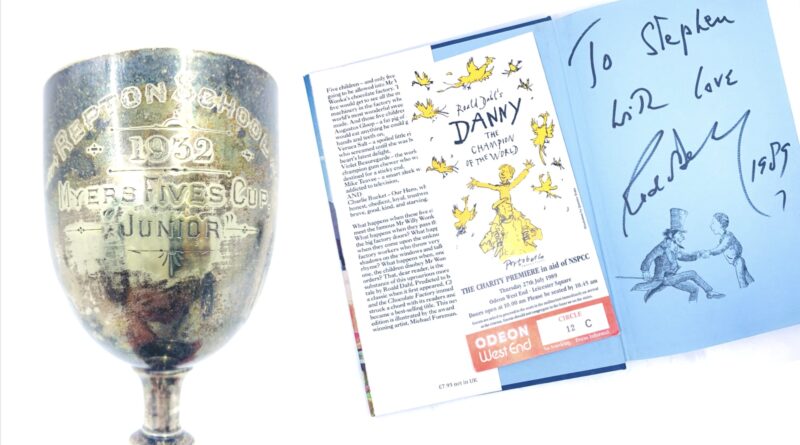 The kindness of renowned children’s author Roald Dhal has come to the fore thanks to the discovery of gifts bestowed on his former next-door neighbour’s family – now set for auction.

Dahl gave two sports trophies won at Repton School in Derbyshire in 1932 and a copy of his most famous book, Charlie and The Chocolate Factory, to his neighbour’s grandchildren. As if that wasn’t enough, when the youngsters were seven and 10, he took them to a star-studded film premiere in London together with their grandma as his special guests. 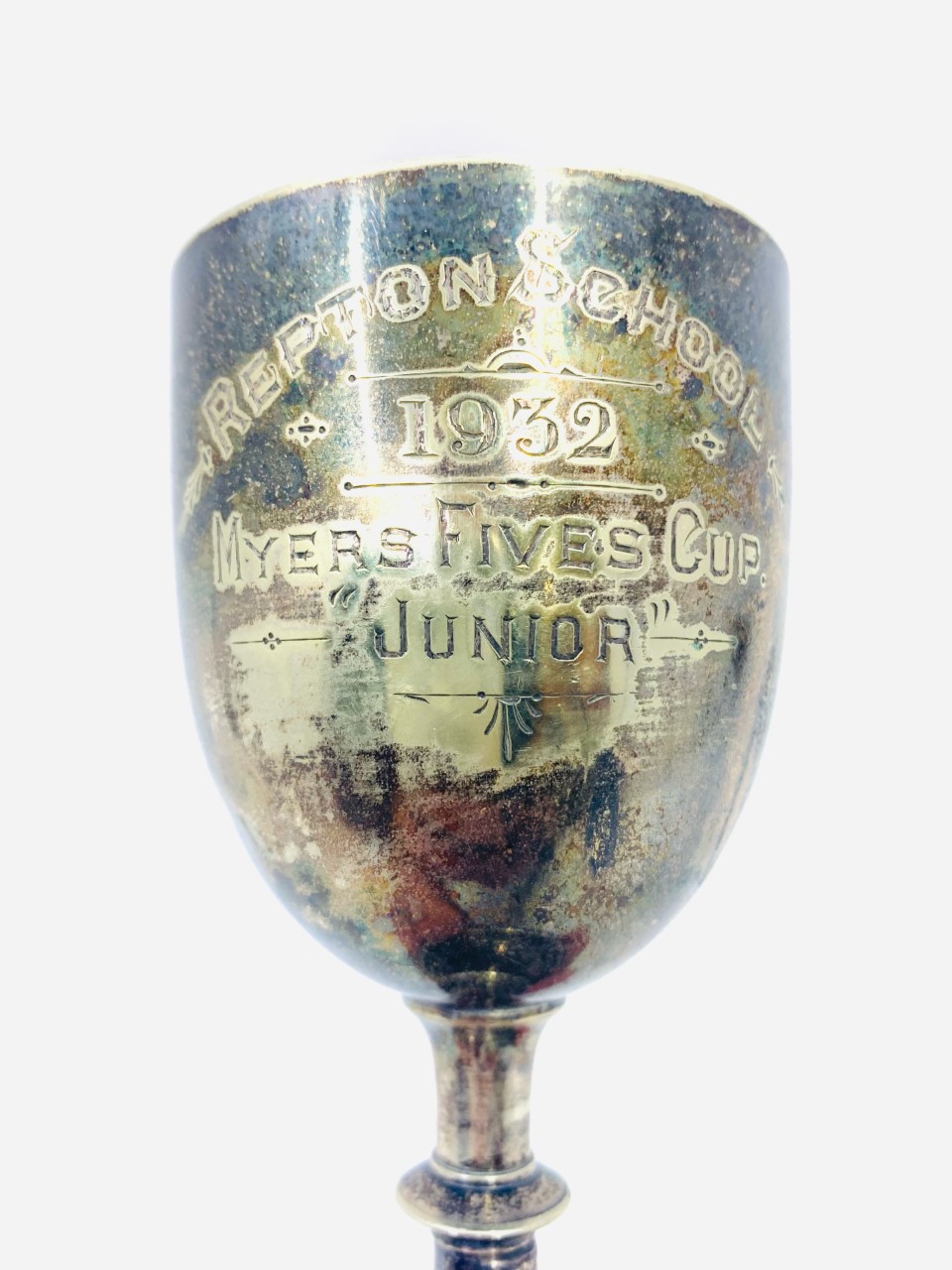 Now one of Dahl’s sports trophies and the book, signed ‘To Stephen, with love, Roald Dahl, 1989‘, together with a ticket for the premiere of Danny the Champion of the World, Odeon, West End, July 27, 1989, will be offered in Hansons Auctioneers’ Library Auction on March 9 with an estimate of £1,000-£2,000.

He said: “It’s thought Charlie and the Chocolate Factory was inspired by Dahl’s time at Repton. Amazingly, Cadbury’s opened a testing facility at Repton, and Dahl and his schoolmates had the rather wonderful task of testing out chocolate.

“Dahl didn’t enjoy his school days but he excelled at sport, particularly Fives, a ball game played by two or four players in an enclosed court. It’s a bit like squash but you hit the hard ball with your hand.

“He was so good at it he became team captain and yet he happily parted with his trophies to put a smile on the face of two boys. It was his way of thanking them for attending the premiere. What a generous spirit Dahl had.

“And of course, his random acts of kindness didn’t stop there. Getting an invitation to go to a film premiere with Dahl must have been akin to finding Willy Wonka’s golden ticket. The fact that the boys’ gran was invited along, too, reminds me of Charlie taking his grandad to the chocolate factory.”

The seller, whose family used to live near Gipsy House, Dahl’s former home in the village of Great Missenden, Buckinghamshire, said: “My first recollection of Roald Dahl was in the early 1960s when my grandad took me next door to Gypsy House to see the garden.

“The only thing I was interested in was the aviary full of brightly coloured budgerigars. He was just the man next door who wrote stories. I remember one hot summer’s day sitting in the garden with my family when Mr Dahl burst through the back gate and said, ‘Has anyone seen my goat? I’ve lost her’. We did laugh. There were also regular visits from his dogs.

“My grandparents bought the house next door to Mr Dahl in the 1930s and my mum later inherited it. It’s no longer in the family now. My dad worked as a gardener for Mr Dahl for several years and mum helped in the author’s house, ironing and sewing. If mum was caught rushing around, Mr Dahl would say, ‘Anita, slow down, have a rest, make a cup of tea’. They loved their time spent with him.

“My mum gave Mr Dahl’s books to her grandchildren on their birthdays and would often ask him to sign them, hence the autographed copy of Charlie and the Chocolate Factory. In the summer of 1989, I had a phone call from mum saying Mr Dahl had asked if she had a couple of grandchildren he could borrow for the day to see the premiere of Danny Champion of the World.

“My mum and my two boys, then aged seven and 10, had a great day out. They went on a coach trip to London, enjoyed the film with all the celebrities and had lunch out. They thoroughly enjoyed it – a lasting memory. A few days after the event, mum called again saying Mr Dahl had given a gift to the boys as a thank-you for coming. The gift was his junior and senior Myers Fives Cups from Repton School.”

The senior trophy is remaining with the family but the junior trophy is set for auction, sparking memories of a sport Dahl excelled at. The author mentioned winning the Myers Fives Cups at Repton School in 1932 in his autobiography, Boy. He wrote: ‘Fives is possibly the fastest ball-game on earth, far faster than squash, and the little ball ricochets around the court at such speed that sometimes you can hardly see it.

‘You need a swift eye, strong wrists and a very quick pair of hands to play fives well, and it was a game I took to right from the beginning. You may find it hard to believe, but I became so good at it that I won both the junior and the senior school fives in the same year when I was 15.

‘Soon I bore the splendid title ‘Captain of Fives’, and I would travel with my team to other schools like Shrewsbury and Uppingham to play matches. I loved it. It was a game without physical contact, and the quickness of the eye and the dancing of the feet were all that mattered.”