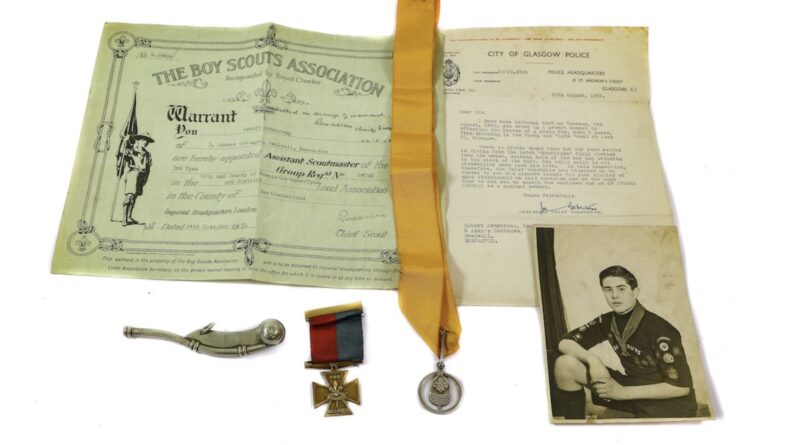 Mementoes of a young boy’s heroism are going up for auction in a North Yorkshire saleroom this month.

The Militaria and Ethnographica Sale at Tennants Auctioneers on March 23, will include a Boy Scouts Association Gilt Gallantry Medal, which was awarded to Robert Armstrong in 1952. According to a letter from the Assistant Chief Constable of the City of Glasgow Police which accompanies the lot, Armstrong rescued a five-year-old by from drowning in a lock on the Forth and Clyde Canal in the city, for which he was awarded a £3 reward from the police. He wrote: “There is little doubt that but for your action in diving from the Ketch ‘Gratitude’ fully clothed into the water, seizing hold of the boy and swimming to the stern of the boat, the child would in all probability have lost his life.” 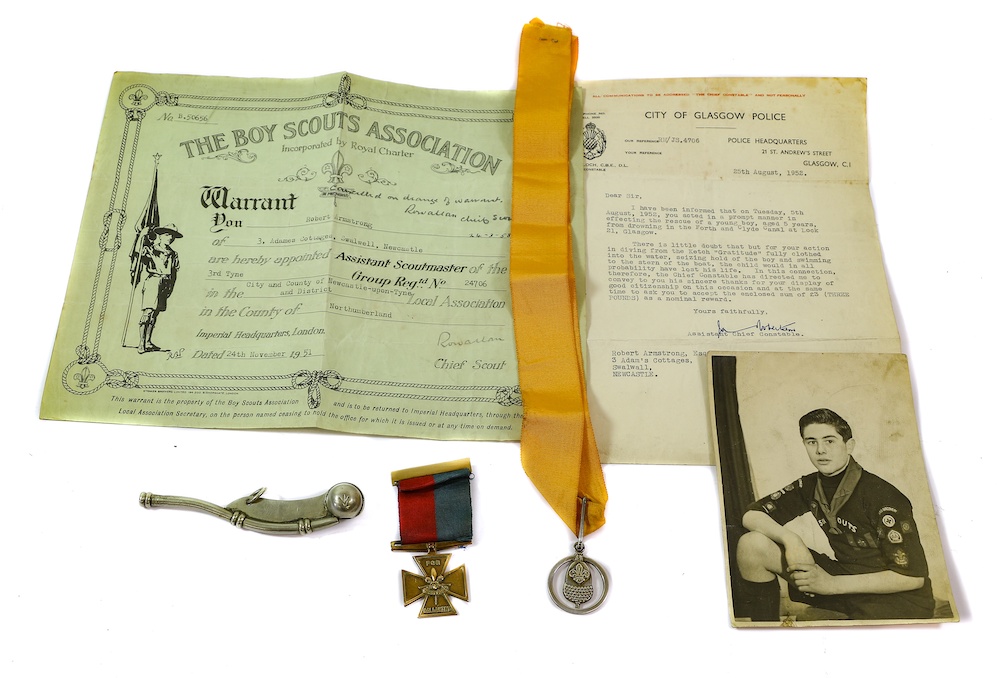 The medal and letter, along with a silver acorn, a photograph, a bosun’s whistle and a warrant appointing Armstrong Assistant Scout Master in 1951 are offered with an estimate of £400-500.

Further interesting medals in the sale including a Naval General Service medal 1909-62 with clasp for Palestine 1945-6, awarded to Oliver Alfred Maynard Bridges who was killed in 1951 in the worst submarine accident since World War II when H.M.S. Affray sank 30 miles south of the Isle of Wight whilst on a practise war patrol, estimated at £100-200.

A Second World War RAF group of four medals awarded to Flight Officer Cyril Allingham of 14 Squadron, are offered with an estimate of £150-250, along with the Pilot’s flying log book with entries for operations over Sardinia, Tunisia and Sicily, which includes an endorsement at the back written in red noting that Allingham had committed an act of gross carelessness that resulted in serious damage to two spitfires.

A First World War trio awarded to Corporal S.B. Wood of the West Yorkshire Regiment comprising 1914-5 Star, British War Medal and Victory Medal are offered with an estimate of £150-250. Wood was a talented musician from Pudsey, West Yorkshire, who was the youngest bandmaster in the British Army at the age of 21 and later composed over 2,000 pieces of music including the ‘West Riding’ march for the Brighouse and Rastrick Band.

Of aviation interest is a silver mounted glass inkwell given to Royal Air Force test pilot squadron leader Cecil Arthur Rea by the Flight Shed Staff of Boulton & Paul, the aircraft manufacturer who Rea worked for after the war, estimated at £100-200. Rea later won a charity race with twelve racing pigeons, in which he flew without compass or map over a 70-mile course.

A First World War Royal Naval Air Service Aircraft Altimeter made by Negretti and Zambra of London, with engraved backplate for Ralph Whitehead of the Royal Naval Air Service is sold alongside a message streamer of the same date, estimated at £500-800. Before the use of radios such streamers, which comprise a weighted pouch with coloured streamer, were the only way that aircrew could communicate with ground personnel; messages were placed in the weighted ouch of the streamer and then thrown from the aircraft to pass on important information.

Also of interest in the sale are two large Imperial Chinese ‘Yellow Dragon’ Flags, which once flew over the Imperial Chinese Maritime Customs Headquarters at Antung, Manchuria, estimated at £200-300. After the death of the Emperor T’ung-Chih, the deposition of the Empire in 1911 and the accession of the Republic, the flags were presented to a Captain R. Caldicott by Mr Hubbard, an Officer of the Chinese Customs Service in 1911.

Amongst an interesting selection of guns are a deactivated C96 Broom Handled Mauser, estimated at £500-700, a deactivated Second World War German P08 Luger Semi-Automatic Pistol, estimated at £600-800, and a late 18th/early 19th-century 16 Bore Flintlock Sporting Gun by H.W. Mortimer of London, with an estimate of £800-1,200.

Among the ethnographica in the sale is a 19th-century South Eastern Australian Aboriginal wood shield, estimated at £600-800, and an 18th-century Tongan ironwood ‘Aku-Tau’ or war club, which comes with provenance from Hodnet Hall, Shropshire, carrying an estimate of £2,500-3,500.