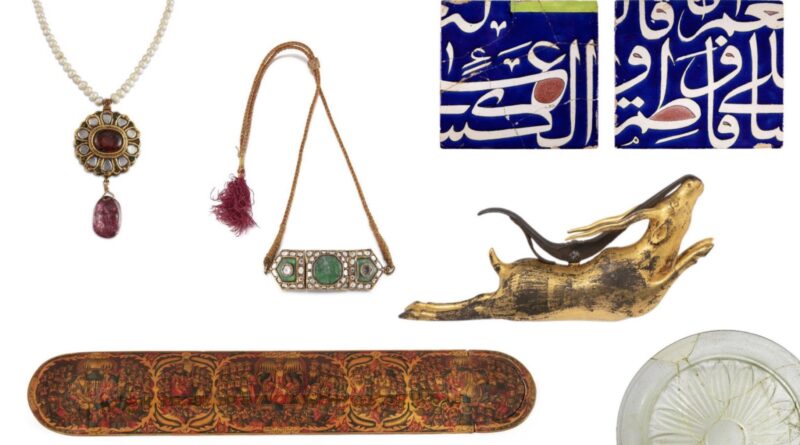 Roseberys presents the first Antiquities, Islamic and Indian Art auction of the year on Friday 1 April. This spring sale has an impressive 456 lots of metalwork, pottery, manuscripts and miniatures, glass, decorative arts, stonework, paintings, contemporary works of art and jewellery.

Alice Bailey, Head of the department comments: ‘ Roseberys April 1st sale of Antiquities, Islamic and Indian Arts features a striking array of pottery, metalwork, manuscripts, lacquer, Indian jewellery and paintings. Leading the sale is an impressive imperial inscribed spinel. A diamond and emerald bazuband formerly in the collection of Princess Bamba Sutherland (1869-1957) daughter of Duleep Singh is another highlight. North Indian paintings from the private collection of eminent scholars William and Mildred Archer highlight a strong section of works on paper. A private collection of Qajar lacquered pen boxes, scribe’s cases and calligraphy, as well as a large group of manuscripts, lead the arts of the book. From the Antiquities section of the sale, we are pleased to offer a large Achaemenid glass phiale and a group of Hellenistic pottery alongside a wonderful private collection of North African red-slip oil lamps.’

The sale is led by an impressive imperial spinel, inscribed with the title of Shah Jahan and dated 1[0]39AH (1629-30AD), (lot 126) formerly in the royal treasury of the 17th-century Mughal emperor Shah Jahan. Suspended from a diamond-set enamelled pendant, the dated spinel was handed down from royal family and is part of a larger collection of impressive Mughal jewellery. Entered onto the market with a pre-sale guided price of £60,000-£80,000, the important imperial inscribed Mughal spinel is polished and drilled for suspension, hung on gold wire from a 17th-century diamond- and a spinel-set gold pendant in the form of a flower head, enamelled to reverse with a red poppy flower on a white ground, on a string of freshwater pearls with silver metal thread attachment. The spinel is approximately 26 carats and comes with provenance from a Private UK Collection, Raja Wazir Singh of Faridkot (1828-1874), and thence by descent Inscription: “Second Lord of the Auspicious Conjunction 1[0]39”.

Lot 129, a diamond and emerald set gold bazuband, Jaipur, India, mid-19th century is another highlight jewellery lot on offer with a projected price range of £20,000-£30,000. The bazuband has three hinged sections, the central square with an emerald in an octagonal gold setting and surrounded by diamonds, the pentagonal sections on either side with a central diamond in an emerald set within the gold setting and surrounded by diamonds, the reverse enamelled in red, white, green and lilac with three large flowers heads and leaves, on the gilt-metal thread and cotton string. This piece comes with provenance from a Private Collection UK; Maharani Bamba Singh (1848-1887), wife of Duleep Singh; acquired from the family of her daughter Princess Bamba Sophie Jindan (1869-1957) Maharani Bamba, Lady Duleep Singh was the Egyptian wife of H.H. Maharaja Sir Duleep Singh.

Estimated to make £2,000- £2,500, is lot 59, an Achaemenid cast green glass phiale, of shallow form with slightly flaring rim, circa mid-5th-early 4th century B.C., restored, measuring 17.6cm. diam. The phiale comes with provenance from the Private Collection of Theo Sarmas (1938-2018). Theo Sarmas was a London businessman who was a passionate collector of Byzantine ceramics and Greek coinage. Princeton University, New Jersey holds the Theo Sarmas collection of medieval Greek coinage. These luxury vessels, made in the finest quality colourless glass, derived their forms from Achaemenid silver and bronze pieces and were specially made in imitation of highly prized rock crystal.

Lot 158, Property from the private collection of William and Mildred Archer, Radha and Krishna on a bed, Garhwal, 1800-1820, opaque pigments on paper heightened with gold, which measures 29 x 23.5cm is a miniature painting highlight on offer. Former owner Archer states that although the painting does not come from any known Gita Govinda series, it reflects the Sanskrit poem’s concluding stanzas: In the morning she rose disarrayed and her eyes betrayed a night without slumber; when the yellow-robed God, who gazed on her with transport, thus meditated on her charms in his heavenly mind. This work has an estimate of £5,000-£7,000.

Lot 202, a gilt-steel powder horn, India, 18th century, realistically cast in the shape of a leaping gazelle, measuring 21.2cm. long has been entered onto the market with a price point of £1,000-£1,500. This piece is offered with provenance from a Private UK Collection dating back to the 1970s. The motif of a leaping antelope, a prize game for a skilled hunter, lends itself to near perfection, with its elegant and slender lines and distinctive powder horn.

Property from an Important Private Collection lot 215, two Qur’an folios in gold, provincial Anatolia or Western Persia, late 15th/early 16th century, comes with an estimate of £1,000-£1,500. Surah al-An’am (VI), middle v.28 to middle v.31; and middle of v.45 to beginning v.49, Arabic manuscript on paper, each leaf with 5 lines to the page written in gold muhaqqaq outlined in black, diacritics in blue, ruled in gold and black, verse markers in the shape of blue or gold roundels, one leaf with marginal verse markers cropped, another cutout. Two folios from the same Qur’an, also from the same surah, were sold at Christie’s London, 26 April 2012, lot 41 and Sotheby’s London, 28 April 2004, lot 10 and 11.

Lot 302, estimated to make £300-£400 are two Qajar inscription tiles, Iran, 19th century, each of square form, one restored, with large Persian nasta’liq script in white on a cobalt ground with pink and green accent, measuring 19 x 19cm. The cobalt glaze is particularly effective in creating a strong backdrop for the bold inscription to stand out.

Lot 404, Untitled (Parchment), 2010 ink, gouache and gold on paper; measuring 83 x 83 cm by Tunisian artist Nja Mahdaoui, born 1937, is a highlight on offer from the contemporary section of the sale. Mahdaoui is an artist known for his use of calligraphy as a graphic art form. He has often been described as a ‘choreographer of letters.’ Mahdaoui began his career as an abstract painter in the 1960s, then continued by experimenting with Arabic calligraphy. Mahdaoui has tried various traditional and experimental media. He produced his first paintings on parchment, such as the lot on offer, in 1972. The work was bought directly from the artist in 2011 and comes with a Selma Feriani Gallery sticker on the back. It has been entered into the sale with an estimate of £4,000-£6,000.

Coming with an estimate of £8,000 – £10,000 from a Private Collection, is lot 413, is a double-sided album page from the Imperial Mughal Library during the reign of Emperor Aurangzeb, Herat, 16th century. The pages contain Deccani and Mughal additions from the second half of the 17th century, opaque pigments heightened with gold on paper, recto with a scene of a prince enthroned, with an inscription identifying the ruler as Genghis Khan, who is being entertained by musicians, perhaps excised from a manuscript of Jami’s Nafahat al-Uns.

Property of an Important Private Collection lot 422, a Qajar lacquered papier-mache qalamdan signed Sani’ Humayun, and decorated with the kings of Persia, Iran, dated 1317AH/1899-1900AD, of typical form with rounded ends, extensively decorated, comes with an estimate of £3,000-£5,000.