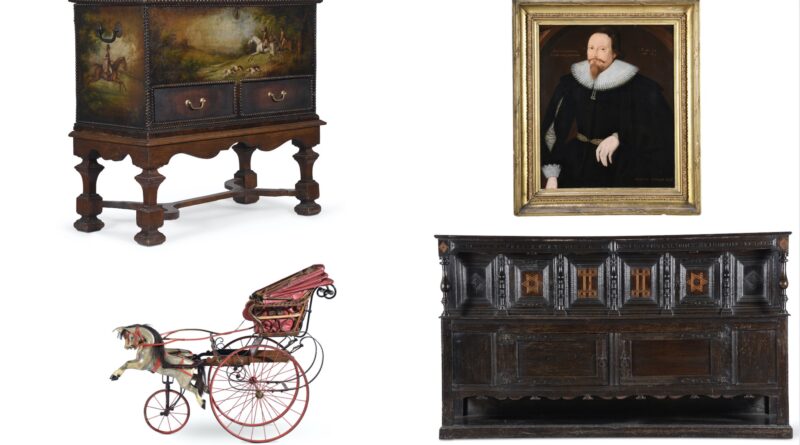 The contents of a historic house, home to the same family for more than 425 years, will go under the hammer at London auctioneer, Dreweatts on May 10.

The collection at Rawdon Hall in Yorkshire comprises an extensive collection of fine art, including family portraits, furniture and works of art, many of which have excitingly never come onto the market before.

They will be offered in a sale titled Town & Country: The Collections of Charles Plante and Rawdon Hall at Dreweatts.

The collection unveils the captivating history of the Rawdon Family from the early Baronets, to the Earls of Moira and the Marquesses of Hastings. Their actions would become significant in many ways, resulting in them becoming one of the most influential families in Ireland.

Nick Snowden, a current family member and owner of Rawdon Hall is able to tell us that the land that the house sits on, may well have been in the family far longer than the house (more than 950 years), with it being granted to Paulyn de Rawdon by William the Conqueror in 1069, as a reward for his body of archers’ service in the Battle of Hastings.

The Grade II-Listed stone-built Rawdon Hall may have replaced an earlier timber-framed house which stood in the 1500s. He said: “My distant ancestor George Rawdon built the house as a centre of dissenting worship, incorporating priest holes to protect non-conformists and a look-out window. Religious services were held under Buckstone Rock on the adjoining Golf Course to Rawdon Hall, by the leading dissenting minister of the time, Reverend Heywood. It was said that white sheets were hung out (as though to dry), as a sign for a local meeting.

George’s grandson, Sir George Rawdon, 1st Baronet of Moira, County Down (1604–1684), became a successful military commander, acting as secretary and agent for Edward, 1st Viscount Conway. Through his marriage to the sister and only surviving sibling of the third Viscount, his influence grew further. His status was underpinned by his serving in Ireland following the Catholic rebellion in Ulster in 1641 and for this he was granted lands in Moira.” His grandson would become the 1st Earl of Moira, who in turn married the 6th Countess of Loudon fusing the Hastings and Rawdon family names together. 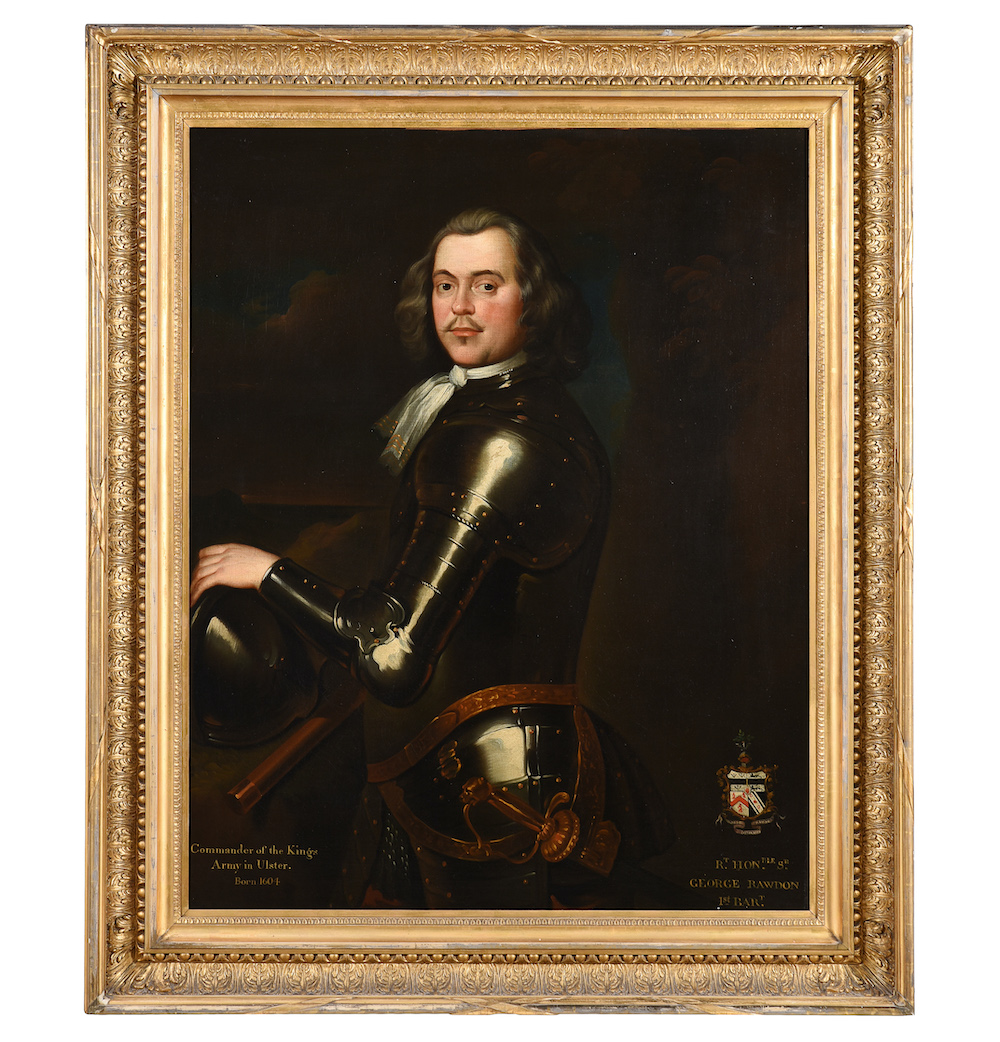 The sale features an oil portrait of him by a follower of Robert Walker (above). It was commissioned by Sir George Rawdon 1st Bt. It carries an estimate of £2,000-£3,000. His absence meant that Rawdon Hall was rented out for many years, to a range of tenants, such as a wealthy farmer, Samuel Bingley, who over-wintered livestock in the house, using the dining room as animal pens!

It is also believed that the house was visited by the novelist and poet Charlotte Brontë in 1841, when she worked as a governess in nearby Upperwood House. In 1870 the family had sold a 99-year lease of Rawdon Hall to a family (the well-documented Briggs family). They in turn let the house to multiple tenants until the 1920s, when an early termination of the lease was negotiated by the family.

During the Second World War the house was requisitioned by The Queen’s Westminsters, an infantry regiment of the Territorial Army. The house was camouflaged with blacked out windows and black cinders, which can still be found scattered around the garden to today. During the army’s occupancy of the house it was visited by one of the most prominent and successful British commanders of the Second World War, the revered Field Marshal Montgomery. In the late 1940’s Nick Snowden recounted: “Friends of my grandmother, Judge Nevin and his family, moved to the Hall and undertook much restoration work, including the stain glass window in the Galleried Hall.” After an absence of 350 years his family finally returned to occupy it.

This is the first time that the family’s extensive collection, amassed by many members of the family over multiple generations, will be offered on the open market. Commenting on this extraordinary sale, Joe Robinson, Head of House Sales and Private Collections at Dreweatts said: “Rawdon Hall has been owned by the same family for over 425 years. The collection framed within it tells the unique story of the Rawdon family, which ranges from the early Baronets through to the Earls of Moira, Loudon and the Marquesses of Hastings and how, through marriage and patronage, they became one of the most influential families in Ireland. Historic collections such as that at Rawdon Hall are always exciting opportunity to capture works which have never come to market before”.

With his family having been custodians for so many years, Nick Snowden’s hope for Rawdon Hall, is that it passes to another family, to be cherished and maintained for many generations to come. Equally, the hope for each piece of the family’s collection, is that it continues its journey and history, wherever that may be.

Among several family portraits in the sale is an oil painting of Francis Rawdon. Created in oil by a follower of Cornelius Janssens van Ceulen, it is inscribed Francis Rawdon Esqr and dated 1632. It carries an estimate of £4,000- 6,000.

A captivating portrait of Dorothea, Lady Rawdon, wife of Sir John Rawdon was created by a follower of Sir Godfrey Kneller. Her first marriage was to Sir John Rawdon 3rd Bt. and their son John became 1st Earl of Moira. She was the grandmother of Francis, 1st Marquess of Hastings and her second marriage was to the Archbishop of Dublin, the Rt Reverend Charles Cobbe (1686–1765). The oil work is estimated to fetch £1,000-£1,500.

A charming portrait of a child in the sale depicts a five-year-old Lady Flora Mure-Campbell (1780-1840), the second daughter of James Mure-Campbell, 5th Earl of Loudon and Lady Flora Macleod. She married Francis Rawdon-Hastings, 2nd Earl of Moir and later become the Marchioness of Hastings. In 1805 she commissioned the building of Loudon Castle, the ‘Scottish Windsor Castle’, to designs by Archibald Elliot. The oil on canvas, produced by a follower of Charles d’ Agar is estimated to fetch £2,500-£3,500. 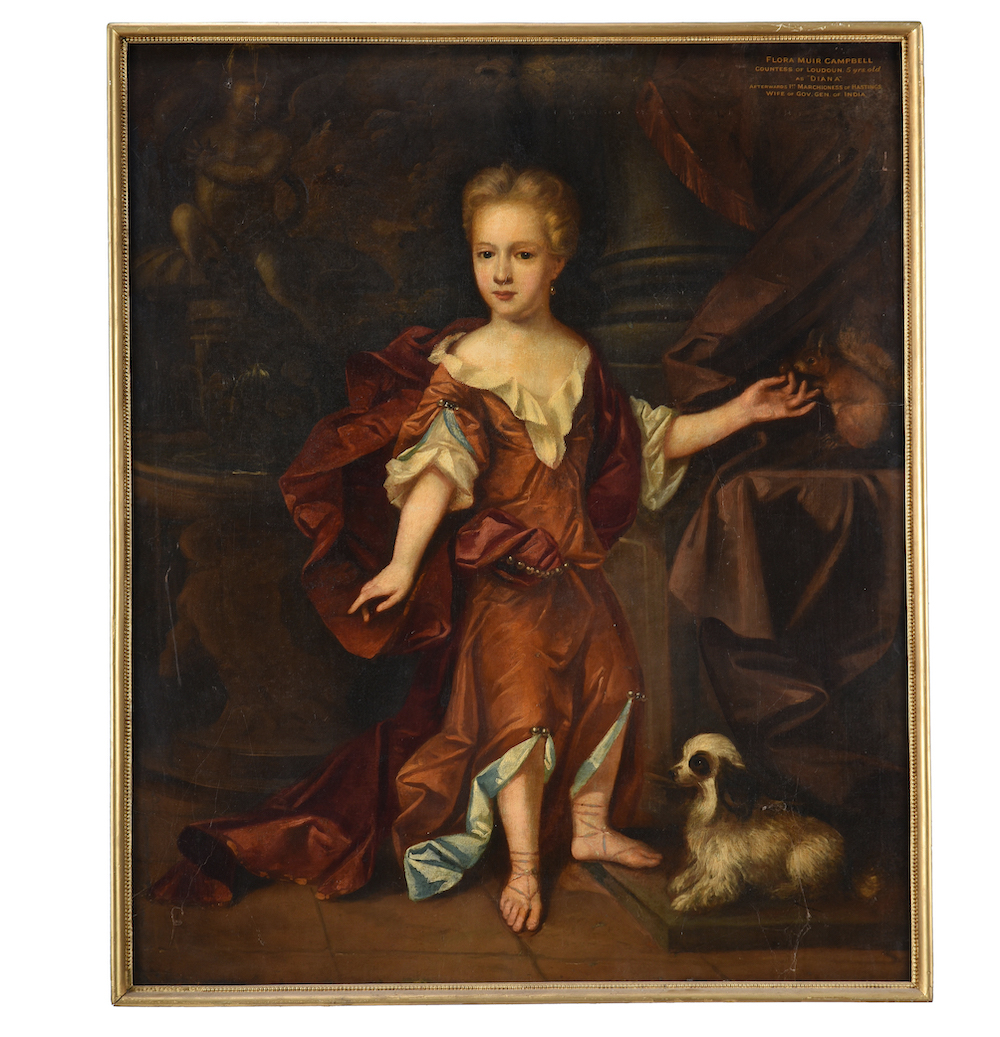 Among other art works in the sale is a set of 12 studies of sibyls by the Italian artist Felice Santoloni (b. circa 1800). Each depicts an allegorical figure of a graceful woman draped in a gown, holding an item or animal, that suggests a particular time of day or night. The images in body colour and pencil, are believed to be based on the fresco paintings by famed Renaissance artist, Raphael (1483-152). The fresco paintings were in the Sala Borgia at the Vatican until the 19th century, but no longer exist, though they were consistently attributed to Raphael. The set is estimated to fetch £2,000-£3,000.

An oil painting in the sale, titled A Huntsman with Two Spaniels is by the English painter Charles Towne (1763–1840). Towne was famed for his wonderful landscapes, as well as encapsulating animals in his works, such as hunting scenes, or domestic animals. This work carries an estimate of £2,000-£3,000. 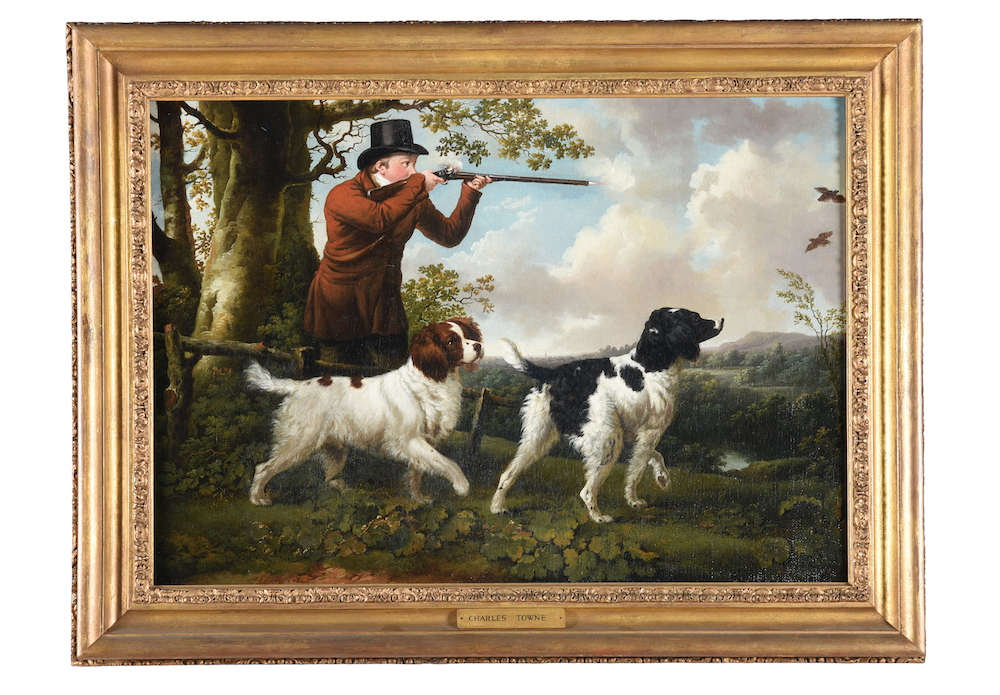 Among furniture in the sale is a 17th century oak and inlaid side cupboard which appeared as part of an article in Yorkshire Life in 1960, titled ‘The Yorkshireman’s Home’. It has also been documented by the Airborough Historical Society. It is believed to have remained at Rawdon Hall ever since its commission in the early 1600s. Along the top of the cupboard are inscribed the words: ‘Give God al praise, for to Him it is dewe, Love God above all thing, and thi neightbour as thiself’, a reminder of the religious origins of Rawdon Hall, when it was built by George Rawdon as a centre of dissenting worship. This decorative cupboard carries an estimate of £3,000-£5,000. 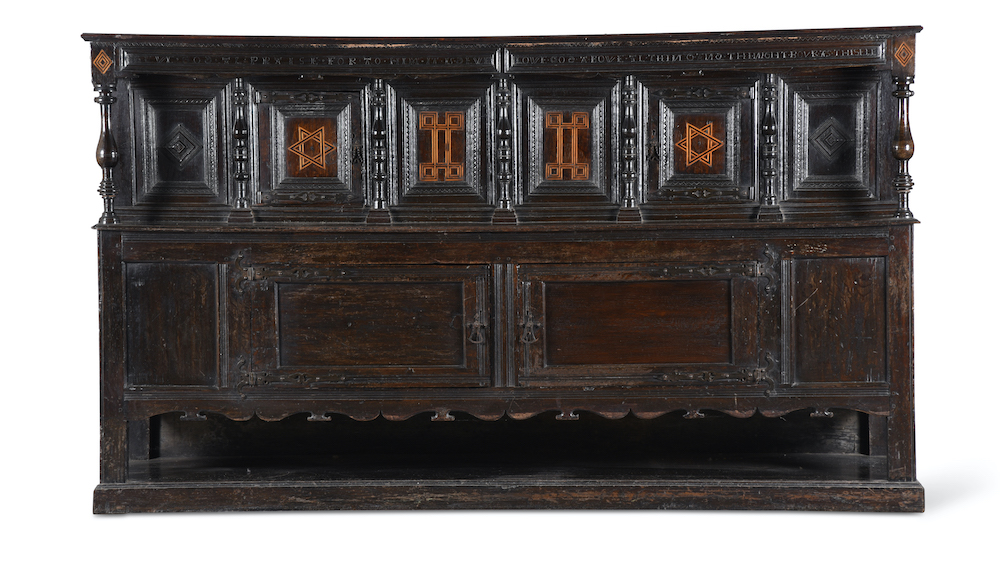 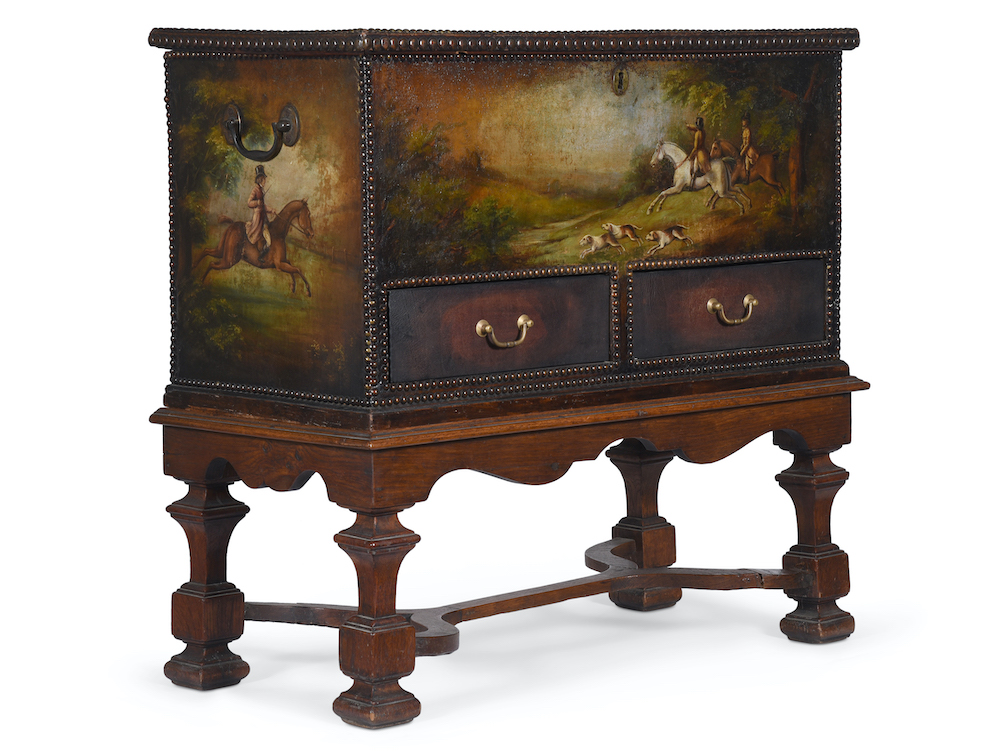 An unusual addition to the sale is a Victorian, or Edwardian children’s horse and carriage, believed to have been sat in by Queen Victoria as a cild, via the connection of Lady Flora Hastings, who was Lady in waiting to Queen Victoria’s mother, the Duchess of Kent. The carriage comprises a raised leather-clad bamboo seat behind a pair of model horses, set on wheels in a ‘penny-farthing’ arrangement. It comes with a pair of carriage lamps and is estimated to fetch £300-£600. 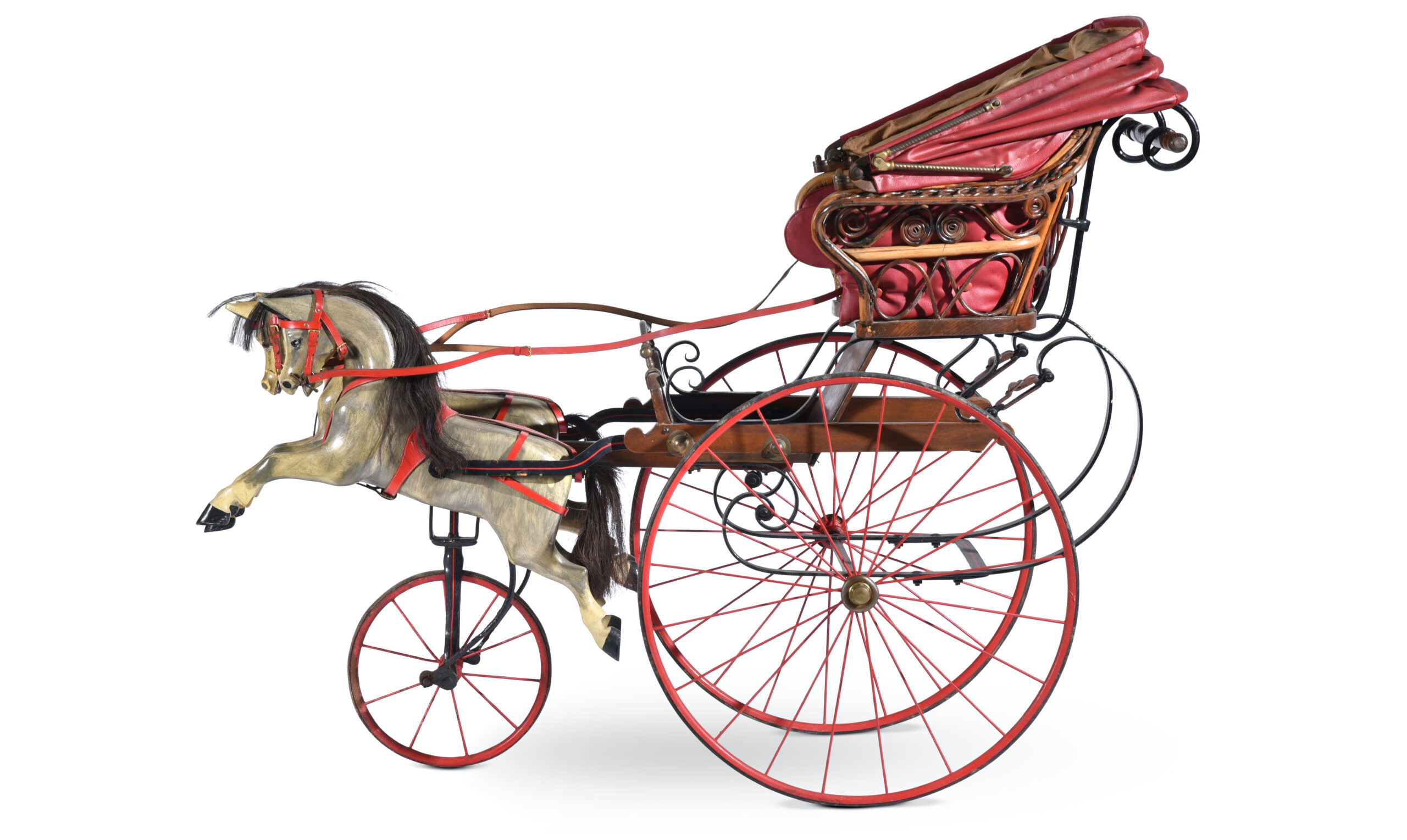