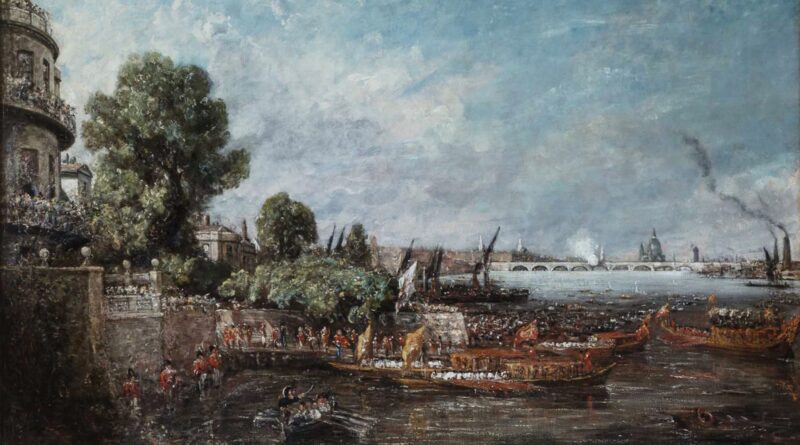 The largest known painting by artist John Constable, but which was never exhibited in his lifetime, has been brought back to its full glory by National Trust conservators, revealing a long-vanished Thames skyline view.

The painting, the Embarkation of George IV from Whitehall: the Opening of Waterloo Bridge, 1817 which records the scene on the second anniversary of the Battle of Waterloo , has now returned to display at Anglesey Abbey in Cambridgeshire as part of a celebration of Constable works in its collection.

It is on show alongside other works by Constable at the abbey, including a view of Stoke-by-Nayland in Suffolk, which was thought to be a copy but which Constable experts have now confirmed is an original painting by the artist.

The painting of Waterloo Bridge normally hangs in the library at Anglesey Abbey, where the panels and shelves are made from timber salvaged from the piles of the original Waterloo Bridge when it was dismantled in 1936. The current bridge was opened in 1942.

The National Trust’s Royal Oak Foundation Conservation Studio in Kent has spent over 270 hours conserving the painting, which has transformed its appearance. Several layers of badly yellowed varnish had obscured the detail and turned the painting into a very dulled view of the 19th-century Thames. But with most of the old varnish layers removed, the scene has been transformed to show bright blue skies and a view of the early Thames skyline with details of what the river was like before the Victorian development alongside it.

‘This has been a painting which has been dramatically transformed by the conservation treatment,’ said Sarah Maisey, Senior Remedial Conservator for Paintings at the National Trust.

‘There had been some earlier tests which showed that this painting would respond really well to varnish removal but it has been a particular delight to see the quality of the improvement. There were challenges. It had been painted, and varnished, at different stages so care had to be taken to ensure that the solvents being used to thin and remove the varnish layers didn’t also affect the paint layer. We are delighted with the final result.’

Rebecca Hellen, Senior National Conservator, Paintings, added: ‘Exploring the way Constable created this artwork has involved careful scientific analysis of paint and looking closely at an x-radiograph of the artwork. Drawing together in-depth knowledge on British art across the Trust and beyond has been tremendous as people collaborated on understanding this artwork and some of its enigmatic and more complex stories. That research approach will continue and we will continue telling that story to visitors to Anglesey Abbey.

It is very likely that John Constable was present at Waterloo Bridge when it was opened by the Prince Regent and he subsequently created many sketches of the subject. He did eventually complete and exhibit another version of this subject at the Academy in 1832, on a slightly smaller scale (now in the Tate collection).

Doubtless inspired by Canaletto’s brilliant water pageants in Venice, the painting shows the Royal Barge and many other barges with rowers gathered near Whitehall, about to set off for the opening of the new Waterloo Bridge, in the background. George IV (1762-1830), Arthur Wellesley, 1st Duke of Wellington (1769-1852), and Frederick Augustus, Duke of York (1763-1827) were present.

The cleaning of the painting and the clarity that has resulted shows clearly how the scene painted by Constable is in marked contrast to the scene today, with almost none of what appears in the original painting remaining. The bridge itself was replaced, in 1942, by a modern concrete structure, and, with the building of the Embankment and many grand Victorian age buildings alongside it, the waterfront is very different today. One of the features which remains is the view to St Paul’s Cathedral in the distance.

John Chu, curator of paintings and sculpture at the National Trust added ““Constable’s painting of Waterloo Bridge, full of the pageantry and colour of urban life, is a significant contrast to the quiet country scenes he is more famous for, such as The Haywain. This large-scale depiction of modern events and the London metropolis was a big departure at this point in his career. The Opening of Waterloo Bridge remained in his studio for the rest of his life. It passed through a number of hands before being bought by Cara, Lady Fairhaven and given to her son, Urban Huttleston Broughton, Lord Fairhaven of Anglesey Abbey, a collector with a good eye for pictures. He displayed it in the library at Anglesey Abbey where it has now returned.”

Anglesey Abbey is currently holding a celebration of its collection of works by Constable under the title Constable Revealed.

Also on show is a small – 10 x 15 cm (4 x 6 in) – oil sketch Summer Evening, Stoke-by-Nayland which has now been acknowledged as an original Constable work.

Constable is an artist who is known to be much imitated and copied – and sometimes deliberately faked. But clues in the brushwork and canvas, its relationship to other paintings he was doing at about the same time and its history of ownership made it clear it is an original.

John Chu said they had always known the painting had a strong provenance but that had not prevented earlier doubts about who had created it.

“There is a label on the back, signed by Constable’s son ‘Charles Constable’ which reads ‘Painted by John Constable R.A’. We can therefore assume the sketch at once stage belonged to Charles Golding Constable himself. In the sales catalogue of some of his effects there in 1869 there is a listing which is almost certainly this painting.

“We are very grateful for the work done by Constable expert Anne Lyles who led to this reattribution and the recognition that this was indeed painted by Constable.”

Although it was believed to be an original Constable when acquired by Lord Fairhaven for his collection at Anglesey Abbey, doubts had later been cast on it because it was similar to known copies. Another oil sketch of Stoke-by-Nayland was used to create an engraving by David Lucas for Constable’s series, English Landscape (1830-32). The engraving inspired artists to copy that work and, although not a close match to the Anglesey Abbey sketch, the confusion seems to have created the doubt over its origin.

Art Historian Anne Lyles was the first to recognise that the Anglesey Abbey sketch Summer Evening Stoke-by-Nayland might be incorrectly attributed. “I thought straightaway this sketch looked ’right’; and indeed one – to me – giveaway feature helping lead to the reattribution, even before looking at it in the flesh, was the out-turned tacking edge at the top, a way Constable often treated his canvases. I was subsequently invited to Anglesey Abbey to look at the sketch along with the rest of the works there by or attributed to Constable and it became much more clear that this was an original sketch by John Constable.”

The painting is likely to date from c. 1810-15, in keeping with the date of sketches of the area by Constable.