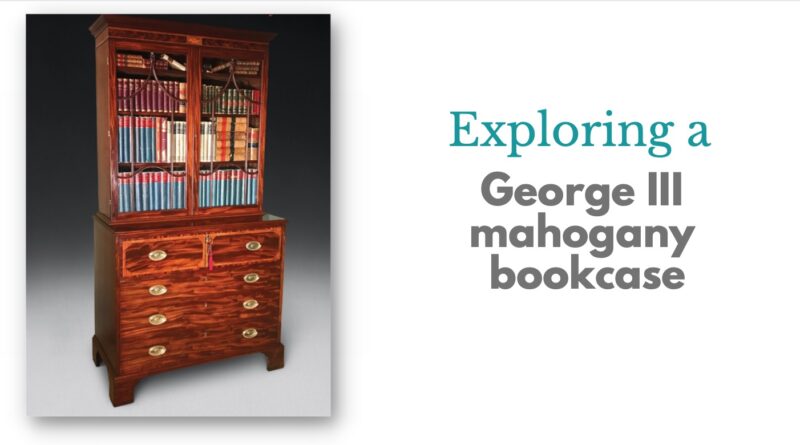 Every day something extraordinary happens in the world of antique dealing, although you never know the circumstances behind that “thing”. This particular journey began some months ago when I was approached by a person who had inherited a piece of furniture.

With nowhere to put it, it was currently languishing in his garage. Being only a few miles from my Witney home, I decided to delve deeper and I am very glad I did.

A deal was done, hands were shaken and I exchanged a smaller piece for a wonderful George III secretaire bookcase, pictured above.

The standard of workmanship and attention to detail it demonstrated were so high, it is difficult to know where to start. So let us begin at the top and work our way down. Everywhere one looks, there are details which make it stand out from run-of-the-mill pieces, making it a veritable ‘Rolls-Royce’ of bookcases.

On the top of the bookcase we find a cornice featuring a carved Greek key pattern above a concave moulding. The frieze is crossbanded in satinwood with an inlaid central shell motif and chevron bandings in mahogany running around the sides on the returns.

Both doors on the upper part have an unusual arrangement of glazing bars. There are eight panes: both the uppermost are arched with a central carved leaf motif, while the lower two panes are in a serpentine shape.

By encompassing elements of both the rococo and the neo-classical we are given some hints as to date. In my opinion the bookcase was made in about 1785.

Continuing down the bookcase, onto the base, we see how cleverly the maker tied the decorative elements together.

There is satinwood crossbanding around the top drawer which, in effect, gives the impression of it being two panels.

Such are the details and skills required, one begins to understand the lengths to which the cabinetmaker went to achieve this finish – he doubtless had a very special client of both wealth and good taste.

But it is only when one opens the drop-down front of the secretaire drawer, we see the full flourish of the bookcase. The maker must have used every tool at his disposal to produce such a veritable symphony of woods and craftsmanship.

The central door, echoing the top of the bookcase, has a shell inlay in a Harewood oval set. It appears in a chequer-banded yew wood ”window” flanked by inlaid columns – again in harewood (maple wood that has been dyed greenish grey), yew wood and satinwood.

Columns like these usually hide secret compartments and these are no exception. But how are they opened without breaking your fingernails? The central door opens to reveal a gap either side at the back of the compartment, from where the secret drawers can be pushed open.

As you would expect, given the outstanding quality of the piece, the rest of the secretaire’s drawers reflect its conforming patterns just as well. Shaped pieces above the pigeonholes are in green harewood, while the drawers above and to the side feature yew wood panels crossbanded in satinwood with chequer bandings. All these exquisite details show no expense was spared by this exceptional maker.

But it is only when fully open that we see how this garage discard rises like a phoenix from the ashes to become a gentleman’s bookcase of the very finest quality.

In the absence of a label, signature, or original receipt it is difficult to ascribe the piece to any maker. But there are strong influences from the George III period pattern books by Chippendale, Ince and Mayhew, Hepplewhite, Sheraton and others. It may well have been made in London, or by Gillows of Lancaster, buteven more important than who made it, is the effect it has on the viewer standing in front of it.

The excitement of cleaning and conserving an item to its original, much-cherished, condition is unparalleled. As I tell friends, I really am one of the luckiest people alive because this labour of love is at the heart of my day job. I still rush to work every day – and there aren’t many who can say that!