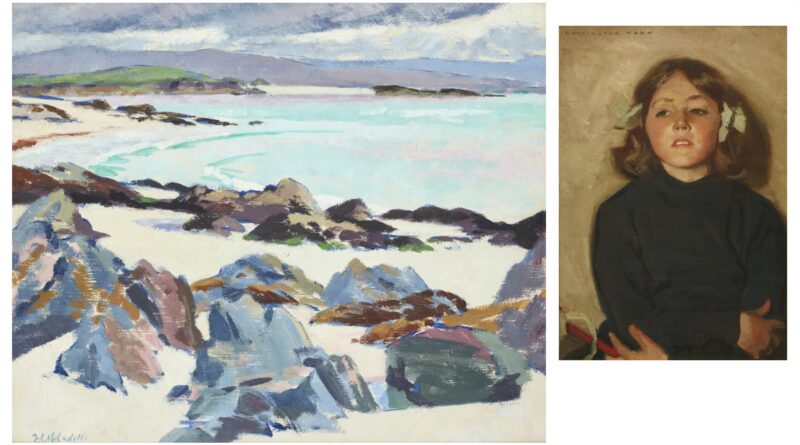 Cadell, the youngest of the four artists known as the ‘Scottish Colourists’, visited the Hebridean island of Iona for the first time in 1912. He found such inspiration in its light, natural beauty and expansive views that he returned regularly until the 1930s.

Many of the works made by Cadell away from his Edinburgh studio were painted on easily transportable boards measuring 15 by 18in. A fine example is Iona, East Bay – The Little Island and Mull, an idyllic sun-lit scene of the White Strand at the north-east of Iona, which was one of the artist’s favourite places to work. Looking north, one can see Cows Rock, the Strait of Storm between Iona and the small island of Eilean Annraidh and beyond to Mull. 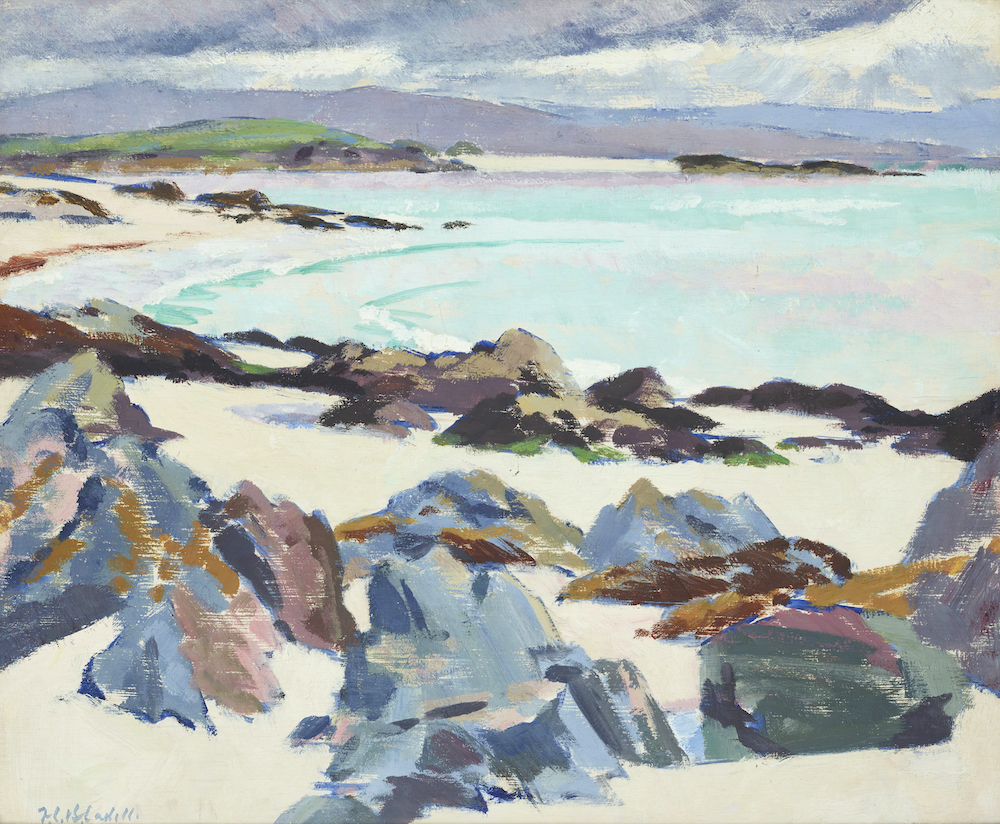 Cadell gave this painting to Jessie Service, a sister of his great patron, the ship-owner George W. Service, who summered with his family on Iona. The two men met during Cadell’s first visit to the island, with Service eventually acquiring some 150 of his works. In Cadell’s Register of Pictures (a document on loan to the National Galleries of Scotland) an entry for October 1924 references three Iona landscapes sold to Miss Jessie G. Service, Kelvinside, Glasgow for £25 each. Last sold in 2001, it returned to market to bring £106,250.

Head of Sale Nick Curnow commented: “It was very exciting to see such a level of international interest and enthusiastic bidding  – live online, on the telephone and now back in the room – across the range of Scottish art on offer. Following a display of his work in our Glasgow gallery, Cadell’s beautiful depictions of the Western Isles led the way, with all of his works exceeding top estimate.”

Cadell’s The Steading, another 15 by 18in oil on board, depicted a farmstead viewed from a distance through a grove of sun-dappled trees. Painted whilst visiting the neighbouring island of Mull, it is thought to be a scene near Loch Buie on the east coast or the village of Auchnacraig where he worked on several occasions. Competitive bidding saw this intimate work sell for £72,500. 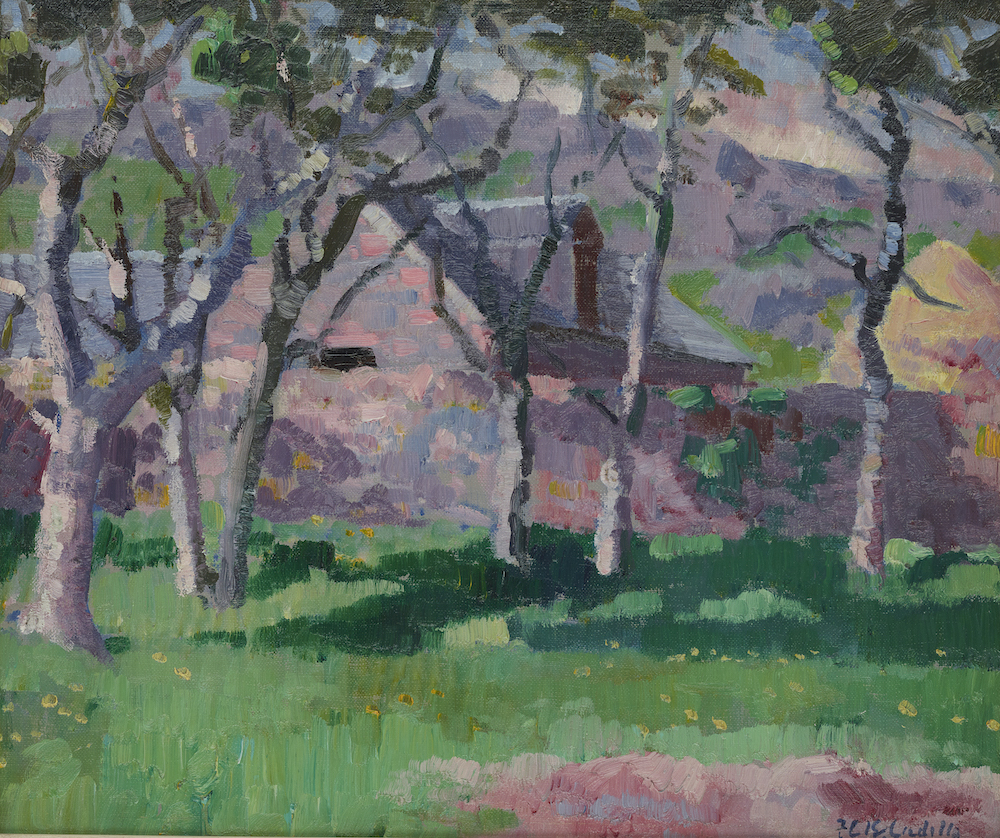 George Leslie Hunter (1877-1931) was the most independent of the Colourists. Sold for £42,500, The Blue Tablecloth (Still Life with Tasselled Fan) c.1917 dates from a key phase in his career that followed travel around Europe and America. Deprived of his first solo exhibition by the San Francisco earthquake in 1906, he had held shows with the Glasgow-based dealer, Alexander Reid in 1913 and again in 1916. Passages of paint in this work, such as the severely fore-shortened glass and the rendering of the flower heads, show why Hunter’s work of the period immediately found favour with collectors. 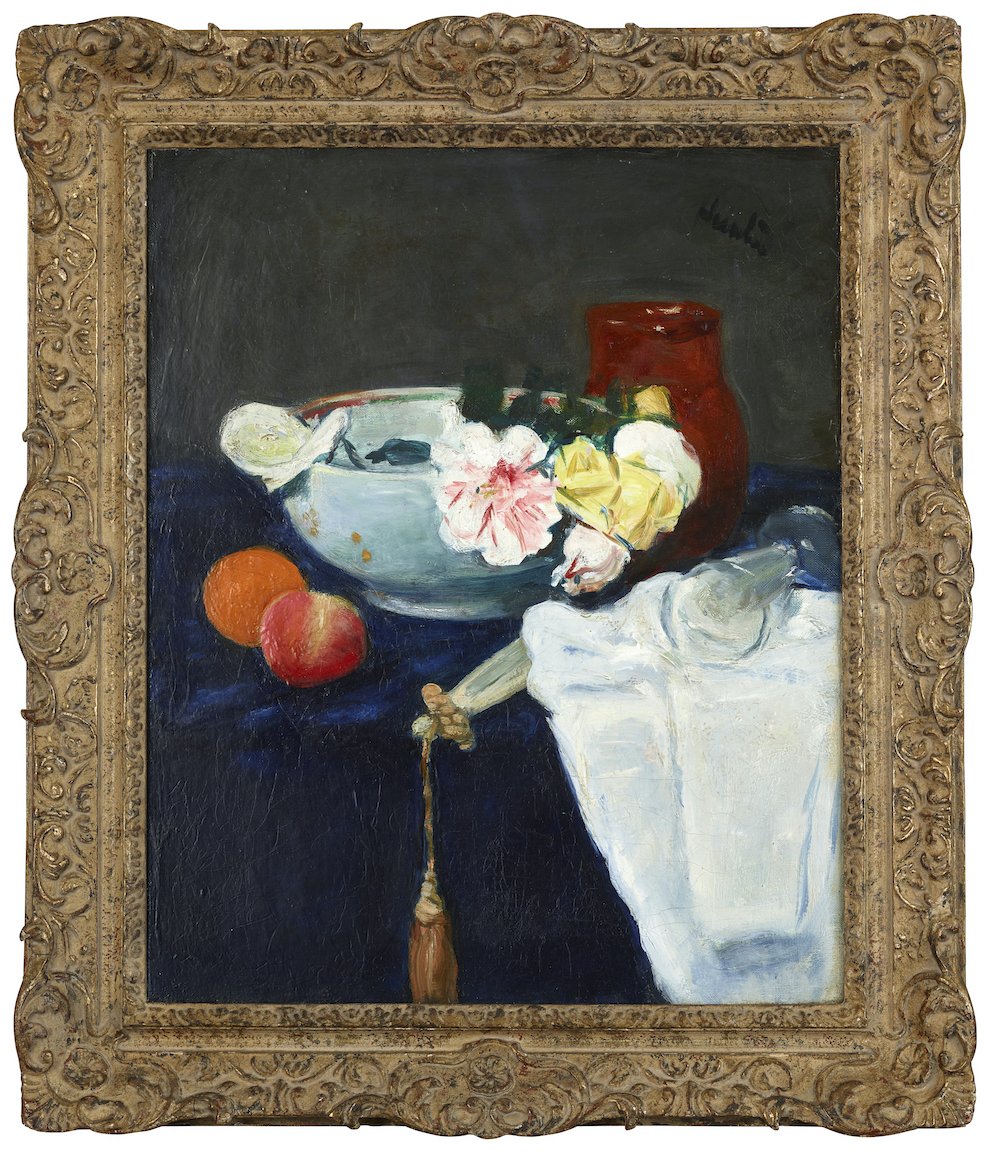 Estimated at £15,000-20,000 and sold at £37,500 was the Charles Oppenheimer (1876-1961) oil on canvas In the Evening Light. It is a view of the artist’s house at 14 High Street, Kirkcudbright, where (interrupted by Great War service in the Royal Artillery) he lived between 1908 and 1931. He rented the house from fellow artist E.A. Hornel, who lived next door in Broughton House, and his neighbours included Jessie M. King and her husband, E.A. Taylor and the crime writer Dorothy L. Sayers.

Oppenheimer painted several similar views of his home. One now hangs in Oldham Art Gallery and another in Broughton House itself.

A portrait by Harrington Mann (1864-1937) of his daughter Cathleen brought £13,750. The sitter provided the reluctant model for several of her father’s best London period works (the 1906 oil Cathleen hangs in the Museum of Fine Arts, Ghent) and here appears less than delighted to be sitting still once more. She is painted arms crossed, wide eyed and her hair tied in green ribbons. 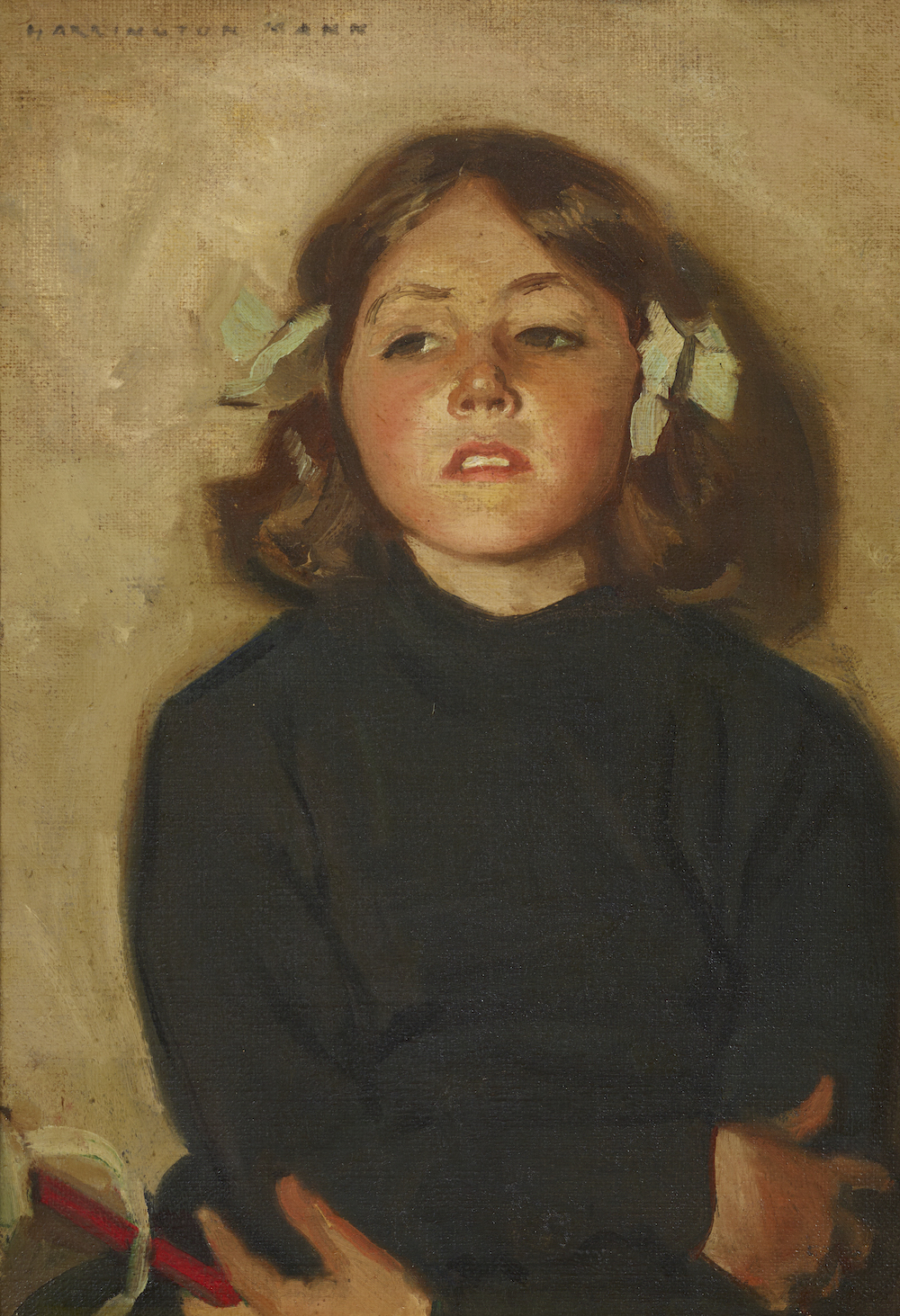 Taught by her father and his friend Ethel Walker, Cathleen later trained at the Slade and became an established artist in her own right. Following her 1926 marriage to Francis Douglas, the 11th Marquess of Queensbury, she became unwillingly known as the ‘Painting Peeress’.

Two confident, mature works by Anne Redpath (1895-1965) sold well. Redpath visited Corsica in 1954, staying in Bastia in the north-east of the island. It has been suggested that the settlement depicted in earthy tones in Corsican Village might be Tralonca or Soveria. It sold for £15,000 followed at £32,500 by White Cyclamen, a work related to another of the same title, dated to 1962 owned by Aberdeen Art Gallery. 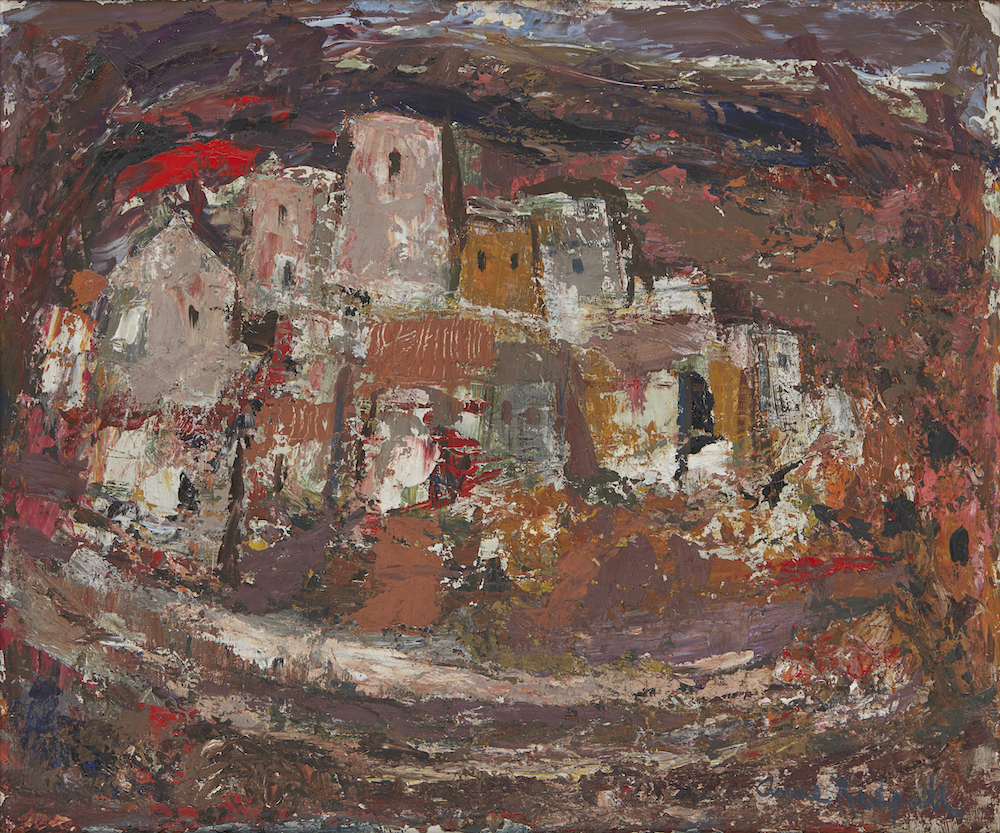 Paintings by Scottish women artists continue to gain traction in the market. Lyon & Turnbull specialist Alice Strang, editor of the influential book Modern Scottish Women: Painters and Sculptors 1885-1965, is a recognised expert in this field. She said: “It is wonderful to watch interest in Scottish women artists continue to grow and grow, with Anne Redpath, Joan Eardley, Dorothy Johnstone and Margaret Morris blazing a trail for this chapter in Scottish art history.” 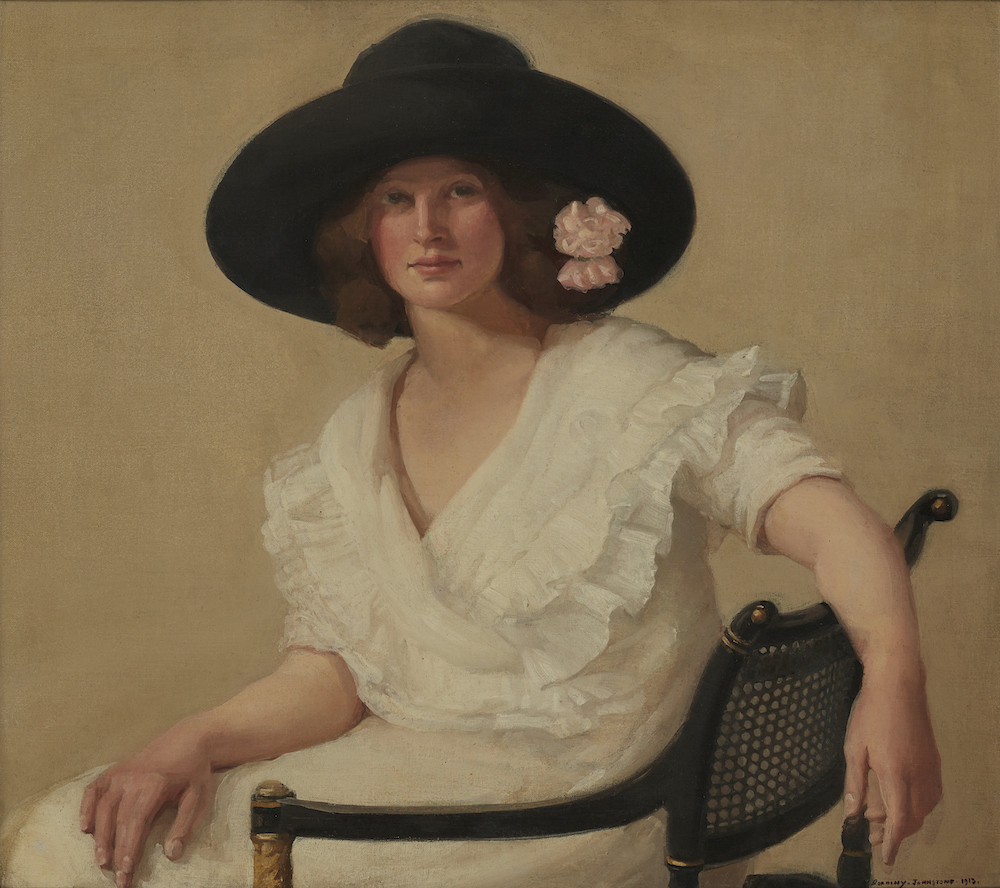 The Black Hat, a rare work by Dorothy Johnstone (1892-1980) signed and dated 1913, sold for £12,500. At this time Johnstone, one of the first students at the newly-established Edinburgh College of Art, had begun exhibiting at the Royal Scottish Academy (in 1912) and the Royal Glasgow Institute (1913). She focussed on figure painting with her sitters, as here, presented against a muted, plain background. The sitter is shown seated in a Regency black and gilt painted bergère chair wearing a broad-rimmed hat punctuated by a single pink bloom.