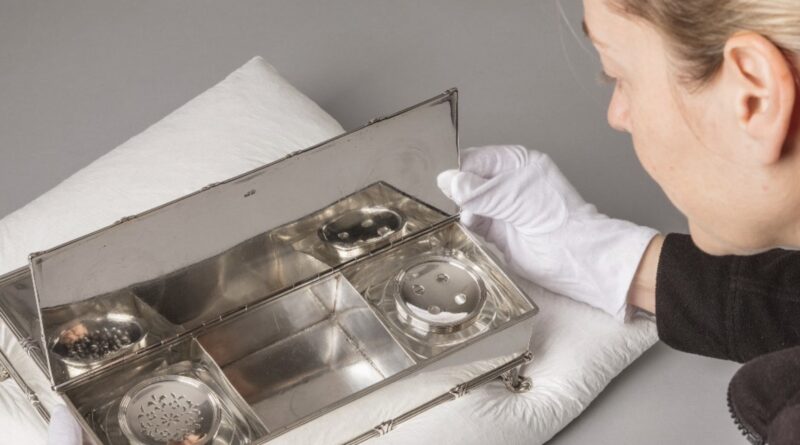 A silver inkstand used by Viscount Castlereagh for correspondence that shaped post-Napoleonic Europe goes on display for the first time to mark 200 years since his death.

The National Trust has acquired the silver inkstand of Viscount Castlereagh (1769-1822), the renowned statesman who interviewed Nelson before the Battle of Trafalgar. It will be displayed publicly for the first time at his former home, Mount Stewart in County Down, 200 years after Castlereagh’s death.

From 1802 to 1822, Viscount Castlereagh, also known as Robert Stewart, 2nd Marquess of Londonderry, played a pivotal role at the centre of European affairs as United Kingdom Secretary of State for War and the Colonies and Foreign Secretary during the wars with France and her allies.

In his role as Foreign Secretary, he also helped establish peace between Britain and America for two centuries. He was one of the chief negotiators at the Congress of Vienna (1814-15) and his greatest legacy was steering the Congress towards a more equitable balance of power.

The inkstand is one of the most personal pieces associated with Castlereagh, engraved with his coat of arms, and is one of the few objects that would have travelled with him everywhere. It would have been on his desk at 12 Downing Street and seen by anyone visiting him on governmental business, and at Paris and Vienna during the negotiations to settle Europe after the defeat of Napoleon.

It would have been used in the composition of letters of vital importance to sovereigns, statesmen and generals including Tsar Alexander I of Russia, the Duke of Wellington and even Napoleon’s marshal Ney. It is likely to have been present when Castlereagh interviewed Nelson before the Admiral’s departure for the Battle of Trafalgar and used to compose letters to the Duke of Wellington ahead of the Battle of Waterloo.

Castlereagh became so well associated with his silver inkstand that a satirical cartoon of the time, also acquired by the Trust and which will be part of the new display, depicts the statesman sitting with an inkstand on the table next to him.

Christopher Warleigh-Lack, National Trust curator at Mount Stewart said: “We are delighted to have been able to acquire and display for the first time such an important and personal object at Castlereagh’s family home, Mount Stewart. It is not just a beautiful item in its own right – with its scroll feet and glass inkwell and sander with silver lids – but this inkstand was instrumental to seminal historic events, not least the shaping of post-Napoleonic Europe.

“In more recent times, NATO and the EU based their governance on the Congress of Vienna, so this inkstand has a lasting legacy today, much like the dynamic statesman who used it. We hope that this object, together with the exhibition, will offer our visitors the chance to learn more about a fascinating yet complex man, whose impact is still felt to this day.”

The National Trust bought the inkstand from a private seller earlier this year. It is now going on display to coincide with a special exhibition to mark the bicentenary of the death of Viscount Castlereagh, which opens at Mount Stewart in Northern Ireland on Friday 12th August 2022, 200 years to the day since his death in 1822.

The exhibition will explore the life and legacy of Castlereagh, a complex man, who is best known in Ireland for his involvement in the repression of the 1798 Rebellion and as one of the architects of the Anglo-Irish Union of 1800.

Viscount Castlereagh was a member of the Stewart Family of Mount Stewart which is cared for by the National Trust. The Neo-classical house on the shores of Strangford Lough has always been the home of the Stewart family, marquesses of Londonderry. The family is connected to many significant events in Irish, British and European history.