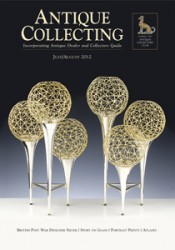 The financial clouds gathering over the southern Eurozone, lit by flashes of citizen protest and rumbling with political thunder, loom on the summer horizon like an oppressive and threatening storm. Contradiction and paradox abound. Forecasts range from the ruinous to the reassuring, reminding one that no forecast is ever exactly right except by chance. During these Jubilee, Antique Exhibition and Olympic days I have seen advice to sell everything, including my house, in order to acquire cash; alternatively to acquire more of everything, including houses and even antiques, but not cash, especially not Euros. It reminds me that, during the economic crises of the Wilson-Callaghan era, some pundits said that housing would never be a good investment ever again, whilst others refuted the suggestion. In the meantime, most houses continued to rise in price because, in a corollary of Mark Twain’s remarks about land (they just aren’t making it any more) there still weren’t enough houses of the right type to go round, meaning houses towards the top end of the market and in places where people want to live, unlike the terraced streets of dilapidated northern mill towns. On the other hand, nearly half of the houses British people own in Europe are up for sale and they are in places as unlike northern terraced streets as it is possible to find, like Spain, where the property market has collapsed.

I dwell upon the house aspect of these contradictions because in this country there used to be a convenient parallel between their price movement and that of antique furniture, but this statistical felicity uncoupled itself around about 2002, when the ACC Index started to fall and house prices in the South East of England went on merrily rising despite the odd hiccup. Unfortunately, the refurnishing that takes place during house movements no longer involves antiques in the way that it once did. Speak of silver, or knightly armour, or rare porcelain, or vintage Aston Martins and the ranks can scarce forebear to cheer. But unless your sofa was made by Chippendale or Ruhlmann, or is maybe a quality repro of a rope-ended Knole, currently it is just another example of busted plush. The top end, like London houses in select boroughs, is the right place to be, however inaccessible to most of us. On the other hand, and we still have one left, redundant farm implements, tinny kitchen bygones and primitive folk art of faded paintwork, all of great charm but little expertise are madly fashionable, achieving prices that cause the jaw to sag.

Permanent dynamic obsolescence was how the late humourist Alan Coren described life’s habit of making the things one struggles to achieve become redundant at the moment of achieving them. His examples were social and educational, like time spent developing an upper class accent and getting it right just as it became almost obligatory to speak in working-class regional or estuary English. Similarly, many an antique collector must fear that over long years he or she has put together an excellent assembly only to learn, at the moment of sale, that the accumulation contains no fashionable modern design or is out of favour. The fact that much that is written about modern design is very optimistic, and its auction performance is highly variable, is neither here nor there. Fortunately, long-term antique collectors develop their own intellectual suits of armour impervious to glancing arrows from transient fashions. An enthusiastic and knowledgeable collector, who assembles the best in the house in which he or she has elected to live, takes a long-term view of fashion and housing. Alan Coren also wrote that Germans with spiked helmets have been replaced by those with briefcases, so German history, in common with the rest of Europe, is now known as economics. Currently, the Germans are prospering mightily while the rest of Europe struggles. And what, according to The Times, are the Germans doing with the billions of savings their earnest labour is creating for them? They are vigorously building houses. Will this, one wonders, reconnect statistical felicity with antique furniture? Or lend further impetus to redundant farm implements, tinny kitchen bygones and faded folk art?