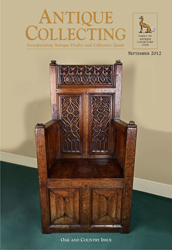 [/gn_table][/gn_spoiler]
This summer has seen more price records being broken by eager collectors. The famous and the fortunate chased enthusiastically after the exclusive and the exotic. It is a tribute to dealers, auctioneers and agents that the quality and range of fine things presented for sale is still so good. Whether it was at Olympia, Art Antiques London, Masterpiece, or smaller venues, or at auction, the rare and original shone brightly, with auctions grabbing the top spots in tussles for acquisition at new levels of expense. The upper reaches of domestic possession went to extremes. Most of us own a book, a car and a painting of some sort, but a first edition of Poirot stories by Agatha Christie fetched £34,000 at Dominic Winter’s, the single seat blower Bentley of Tim Birkin’s fetched over £5 million at Bonhams at Goodwood, and Constable’s landscape, ‘The Lock’, got to £20 million at Christie’s.

It is understandable that a one-off vehicle as unique as the single-seater Bentley, which held the lap record at Brooklands, should set a new price level following the death of its celebrated watchmaker owner, George Daniels. The car was something of an anachronism in motor racing history since it was virtually a Brooklands Special, unlike Birkin’s Le Mans road racing cars, of which his winning Alfa Romeo, once the possession of Air Marshal Italo Balbo, fetched £2.5 million in the same sale. The very special character of the Bentley, which just pipped John Cobb’s much larger-engined Delage to the post in the 1932 Brooklands 3-lap invitation race, ensured its special price.

After £20 million for a painting and £5 million for a car one might think £34,000 to be a modest sum. But not in the world of books, especially those as popular as Agatha Christie’s Poirot; it is what the Antiques Trade Gazette punningly referred to as ‘Herculean’. That a book presumably printed in some quantity should become rare enough to attract this sort of money from a dealer in modern firsts (Jonkers Rare Books) is another indication that rarity and scarcity continue to exercise their hypnotic attraction. The 1924 Poirot was still in its dust jacket, which made it even more desirable. The fact that there were no previous auction performances opened the stage to freshly created drama. In this case, unlike the Birkin Bentley or the Constable, it is possible that another first edition may be found, as so often happens when scarce and dormant antiques, like Godwin Smallhythe tea tables, or Perceval-Compton Enmore Castle Windsors, are initially lured out from obscurity to achieve groundbreaking auction prices.

What is clear is that there is still no shortage of money available to buy scarce artefacts of high reputation and provenance. It is just that the emphasis has changed. In a recent interview, Sir Nicholas Serota said that the bankers he meets to talk about arts funding would have bought 18th century furniture 30 years ago, but now they buy Rietveld and Modernism. Conventional antiques have much competition. But it was encouraging to learn from David Harvey of W.R. Harvey Antiques in Witney that Olympia produced some new and younger customers for the mahogany and traditional antiques in which his firm specialises. The number of serious customers attending the fair seemed to fall whereas uncommitted browsers were on the rise. If there has been a polarisation on the go, with the top end as ever un affected but the middle and lower on the wane, Olympia’s new customers may herald a long-awaited change. In this issue, with Oak and Country an ever-popular topic, we return to a resilient sector that has recently suffered a surprising loss of impetus. We do believe that this is only temporary. The charm of vernacular artefacts is becoming increasingly appreciated and many respond to the unique character that the market clearly seeks at both expensive and bargain levels. We have great pleasure in illustrating some of them on these pages.