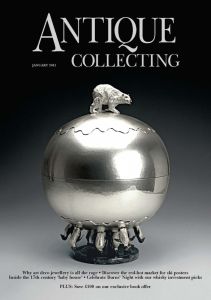 A Happy New Year, once again, to all our readers.  We wish you every success if you have made New Year Resolutions and are keeping to them, however moderately. If kindness and charity are involved as well as personal improvement, always remember Gore Vidal’s dictum that no good deed ever goes unpunished; an epigram worthy of Somerset Maugham.

A foreign acquaintance who has come to live in London and is an antiques enthusiast, starts the year by expressing bewilderment at the words currently used in catalogue descriptions, both by auctioneers and by retail trade on the Internet. He says that his English dictionary does not provide suitable translations since some words have become professional jargon. So, in response to him and in a desire to update previous translations, I offer the following brief dictionary of current antiques trade terminology, mostly used to enhance printed descriptions of humdrum furniture but revealing all the same: –

Antique – an unspecific adjective not much used by auctioneers but still found in retail trade descriptions. Meaning not Modernist, and probably of old appearance, even brown in colour, as in ‘an antique gramophone in veneered period cabinet’. Not useful legally in the event of descriptive disputes.

Associated – not originally belonging to, nor necessarily of the same date. Used to describe ‘marriages’ (q.v.) of furniture composed of different pieces, such as made-up bureau-bookcases or chests on stands, as in ‘oak chest on associated stand’ meaning that the stand has little connection with the chest; it is from another source and has been co-opted for support.

Conforming – in the same style or manner as the rest of the piece, though not necessarily of the same date. As in: conforming legs, conforming panel, etc.

Constructed – mostly used to describe a piece made up from old wood, implying that it is dodgy. As in: ‘constructed from baluster turnings and Romayne panels’.

Estimate – a sale price range suggested by an auctioneer that aims to achieve a balance between market value at the top end and unscrupulously implying a bargain at the lower. Achieving the lower end of the suggested range is held to be a success and, recently, achieving the predicted upper end or more is held to deserve two percent extra commission, according to the fine print of some auctioneers. 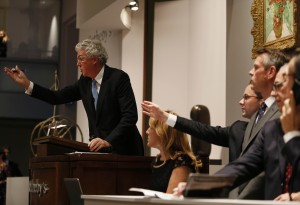 Hammer Price – the price at which an item at auction is nominally knocked down to a bidder but not the amount he or she has to pay because Buyer’s Premium (q.v.) is added to it. Nor is it, either, the sum received by the seller for whom the auctioneer is acting. Like foreign currency exchange rates, it is a conceptual figure, used to ensure that whether you are buying or selling, you get nowhere near it, and incur costs.

Harlequin – deriving from the variegated garb associated with the name and applied to sets of chairs – see ‘Matched’ and ‘Near Set, A’

Important – genuine, authentic; provenanced; originally used to describe antiques in sales of high quality and provenance, to differentiate them from Good, Fine, Provincial, etc. Now used for almost any antiques of genuine, usually 18th century, origin. In circumstances of really important pieces in the original sense, replaced by ‘exceptional’ as in the Exceptional 12 Sale of Christie’s.

Marriage – the joining or assembling of two pieces that did not start out life together. See also Associated.

Matched – as in a ’matched’ set of chairs, meaning that it is a set of similar chairs from different sources, not all identical. Otherwise known as ’A Near’ or ‘Harlequin’ set.

Near set, A – a collection of chairs of similar design but with some having different proportions, sizes, embellishments and dates. See also ‘Harlequin’ and ‘Matched’

Outswept – (of legs) an alternative used in place of ‘splayed’

Period timber – often used in conjunction with the word ‘incorporating’ to describe a piece made up from old pieces of wood from indeterminate sources. As in: ‘a Queen Anne chair, incorporating period timber’. Also described as ‘reclaimed’ timber.

Premium, Buyer’s – not a prize or reward as initially defined in the OED, but used in its secondary meaning of a fee or charge for instruction in profession. Levied on a buyer at auction as well as the commission levied on the seller, thus confusing the issue of for whom the auctioneer is acting. Added to the Hammer Price (q.v.)

Property – as in The Property Of – a gentleman, lady, peer of the realm, etc. A sub-title description used to imply the importance of the piece allied to provenance, frequently without divulging to whom the said Property belonged.

Treewood – a pleonastic verbal embellishment used mainly by country furniture dealers to add spurious antiquity to a description, as in walnuttreewood, yewtreewood, etc. Not used for town furniture like mahoganytreewood or zebratreewood, Gonzalo Alvestreewood, etc, and not affecting rosewood, satinwood etc for obvious reasons.

One thought on “January editorial”