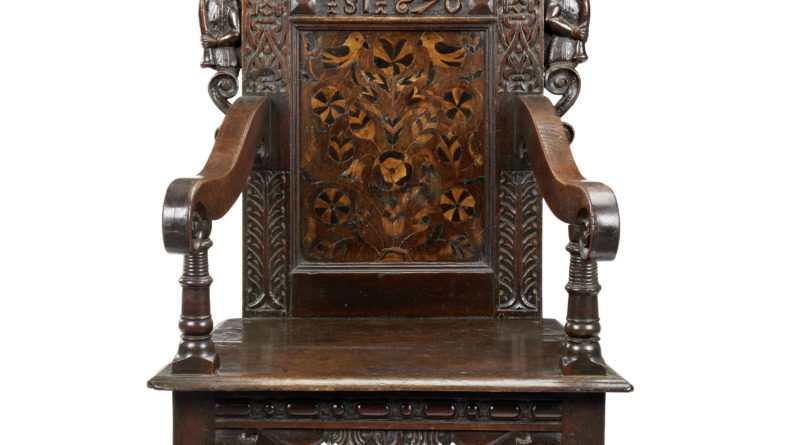 Since 1968, John Andrews has tracked the price of antique furniture against house prices in the South East, the retail rate of inflation and the FTSE 250. Eagerly awaited throughout the industry, he presents his 46th annual Antique Furniture Price Index

Although there were some signs of recovery late in the year, in 2014 the ACC Antique Furniture Price Index fell by another four percent. A decline in antique furniture prices has persisted almost every year since a peak around the year 2001. For this collapse the collector can blame whomsoever he or she chooses, from skyscraper-smashing Islamists to greedy bankers, modernist interior evangelists or domestic décor fashion gurus – take your pick. Better news is that the Index fell almost entirely because just two indices – those for both oak and country furniture – slipped badly from grace. This is despite the more optimistic outlook for oak that we reported in September and is due to dressers in particular. Notwithstanding better performance from later town furniture at the end of the year, and a surprising improvement in some sets of chairs, these two indices dragged a relatively stable set of Walnut, Georgian Mahogany, Regency and even Victorian indices down as a combined total. The table Fig 1 shows the figures for each of the seven indices that are combined to produce the overall ACC Index.

This graph, fig 1A, compares the performance of the ACC Index to the average price of houses in South East Engla 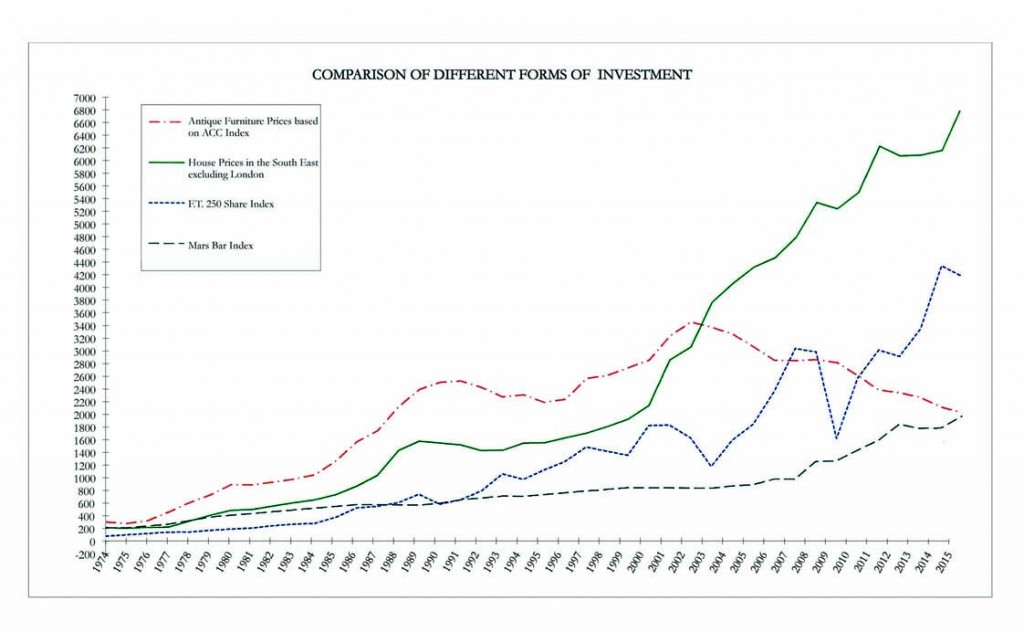 nd excluding London, and the FT 250 share index over the same period. These are all compared with the price of a Mars Bar over the same time scale as a measure of the effects of inflation, rather than any government retail price index, which it was felt was subject to political gerrymandering. But nothing is free from gerrymandering: the Mars bar in 1968 was a 67 gram confection costing 8 old pence; it is now a 51 gram product with a recommended selling price of 51p. Price varies from shop to shop; Sainsbury’s has it at 60p whereas Amazon offers a pack of 48 for £23.52 or 49p each.

It used to be the case that Antique Furniture outperformed these other lines of investment and followed the same kind of cycle as houses in South East England. Since 2001, however, the ACC Index has steadily fallen, whereas SE houses continued to climb. Taking 1968 as the starting point at 100, the indices have now reached the following levels:-

The ACC Index is based on typical pieces of furniture from seven distinct periods or categories illustrated in the ACC book, British Antique Furniture, (BAF), which altogether illustrates 1,400 items. The Index has been calculated annually since 1968, when it stood at 100. It currently stands at 2149. It is based on retail prices from shops, fairs, markets and auctions across the country. There is a widening disparity between retail prices and those at auction, which is leading to anomalies not always explained by the low quality of much that passes through the rooms. London auctions tend to confirm the feeling that the capital is another country, with a separate economy, holding fewer specialist furniture sales than it used to but achieving some high prices. Provincial auctioneers have more sales, with furniture usually a section of an overall fine art and antiques event. The internet has greatly facilitated the collation of statistics, with a much wider range of sources than was available 40 years ago. The Index for a completed year is published as soon after the New Year as possible, so its title always refers to the previous 12 months – i.e. the 2015 Index deals with events in 2014. 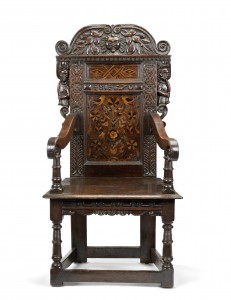 The Oak and Country Furniture indices have fallen from what once seemed an impregnable position. In the September issue we thought that oak was fighting back well; to have a country house and furnish it with oak and country furniture of antique origin was, for decades, the aim of aspirants to social position or enthusiasts who did not live in cities. But September’s review excluded dressers. For a long time the period oak dresser was a potent symbol of achieved success. Even pine provided thousands of examples of handsome dressers of practical utility. Yet Bonham’s sale in Oxford on October 1st included 23 dressers, of which only 11 sold.  Many of the unsold dressers were of poor quality, but there were some good ones. In the three oak sales held by Bonham’s Oxford during the year, dressers wilted, particularly high dressers with racks above. Perhaps shortage of space may explain some of the reasons. Only one – an 18th-century ‘country house’ low dresser of large dimensions, went for more than £8,000. Christie’s sold one for a little more than £9,000, but on the whole, as the retail trade has reported independently, dressers did not shine in 2014.

The Wainscot Chair category did better. In previous years the Oak category has held up well compared with the 18th century, mainly Georgian Mahogany furniture that has been the subject of so much misguided derogation along with Regency and Victorian pieces. But following the decline of six percent in Oak last year, it plunged on in a significant fall of no less than eight percent, towards which chests and side tables contributed, with dressers falling over twenty percent.

The Walnut Index, despite some gains and losses for individual pieces, remained at its previous level, with neither an overall gain nor loss to report. Upholstered chairs lost out slightly whereas good period lowboys were stronger. Chests and chests-on-chests weakened in price, as did kneehole desks, but good examples of walnut bureaux were surprisingly better placed. After so long a decline for the sloping-front bureau generally, this was unusual. It is perhaps because of a scarcity of really good examples, with shaped interiors and the right colour or patination, that it occurred. Cabinet furniture did quite well in comparison with other periods. Fine walnut bureau bookcases are now extremely rare to find in reasonably original condition and are the indulgence of the very wealthy, who do not quibble over minor price percentages. 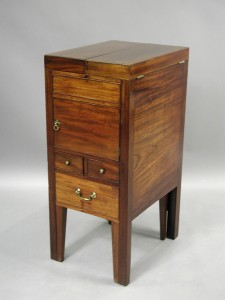 The Early Mahogany Index showed a very slight decline of one percent. High quality dining chairs of early mahogany form improved despite the general move away from formal eating but paradoxically, dining tables declined. Incidental card tables fell slightly. Big bureau bookcases weakened, as did corner cupboards, which are affected by the price decline of the hanging corner cupboard of all periods.

The Late Mahogany Index remained unchanged at 1624.  A small recovery in dining chairs, particularly of Chippendale design, was offset by a decline in tables. Some formal serving tables did better than sideboards. An increase in serpentine chests was nullified by a drop in dressing tables and regular chests of drawers. Wardrobes enhanced their value while bureau bookcases declined. Adam-style armchairs in the classic French manner have done very well provided that their upholstery and covering fabric is up to scratch. Any reasonably well-based claim to country house provenance or identifiable design affected values strongly. For instance, a pair of George III ‘Gainsborough’ open mahogany armchairs with floral needlework and crewelwork upholstery fetched a staggering £182,500 at Bonhams November 19th sale, probably because their design was close to one in Chippendale’s Director, 3rd edition and they related closely to armchairs supplied by Wright and Elphick, the Yorkshire craftsmen, to Lord Rockingham at Wentworth Woodhouse. 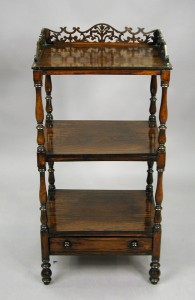 The Regency Index showed a fall of two percent from 2025 to 1977. This small change may indicate that this volatile period is settling down. Gains in bergere chairs and even circular dining tables were offset by losses on library and writing tables and incidental pieces including sideboards. The flamboyance of much Regency furniture makes it more vulnerable to fashion changes in interior décor, affecting chiffoniers and work tables as well as versions of the Davenport desk and kidney-shaped pedestal desks.

The (Mainly Early) Victorian Index had a fall of three percent to 1515.  Davenports and teapoys were marked down along with work tables of the sort mainly conceived for sewing and similar pursuits. These were marginal changes in peripheral pieces but the mainstream aimed at dining, sitting and storage or serious deskwork was unaffected.

The Country Index fell by 10 percent, with gateleg tables, chests, corner cupboards and some chairs losing ground, but most significantly the high dresser category, in which, like the Oak Index, a 20 percent loss was average. In 2013 we illustrated a prodigious dresser that sold for £825 as evidence of a downturn, not then fully grasping the extent of the slump that had arrived.

The comparisons in this table confirm that in general terms the attraction of buying antique furniture as an alternative investment to more conventional funds and property has, since 2001, not held true. Within the vast range of pieces available, many are still good investments comparable with any alternative, particularly those with provenance and which are designed or made by celebrated designers and craftsmen. All the more reason, therefore, for increasing one’s knowledge in every sense of the word. If investment is important then buy, if you can:-

Otherwise collectors should just enjoy acquisition while prices are so low.  There is a feeling that we may be bumping along at the bottom of the cycle and it would be a shame to miss the opportunity while it exists.