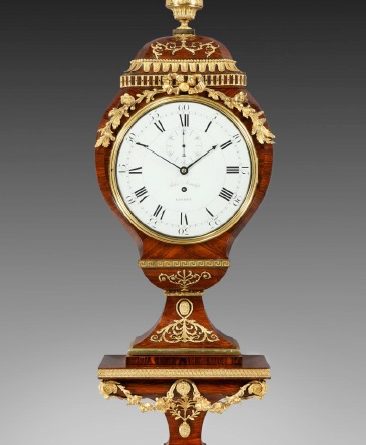 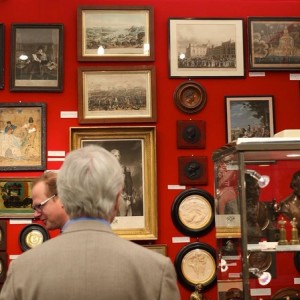 In the first hour new exhibitor Peter Lipitch sold their most important item of furniture, a George III marquetry, ormolu-mount commode made by Henry Hill of Marlborough c. 1775, for a six-figure sum. On the same day another new exhibitor, Beaux Arts London sold a major sculpture by Elisabeth Frink entitled Sentinel II, with an asking price of £90,000.

BADA said that new visitor numbers to the Fair increased, with ticket sales at the door rising by 12% and queues forming prior to the event’s opening. 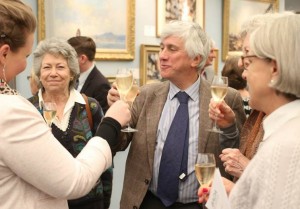 The Fair was delighted to welcome collectors from all over the world with visitors travelling from Russia, France, Spain and other European countries as well as the Middle East, the Americas, China and as far flung as Australia. Exhibitors commented on the number of younger people visiting and buying the Fair.

Gillian Craig, Director of the BADA Fair commented: “This year we welcomed loyal, returning visitors as well as a young, international audience of new collectors. It is encouraging to see that the BADA Fair’s reputation for excellence is growing and is attracting a younger generation of buyers.”

Furniture forms an important part of the offering at the Fair, and BADA said sales were extremely encouraging. Richard Courtney reported the sale of a very fine George I burr walnut tallboy c. 1720 to a new client. J Roger Antiques sold a Chinoiserie corner cabinet to a young, first-time buyer amongst several other sales made to young collectors met during the course of the Fair.

Furniture specialist Jonathan Coulborn of Thomas Coulborn & Sons was delighted to sell the highlight of his stand, an exceptional palace wall regulator made by John Arnold in England 1770-80, with an asking price of £325,000. It was almost certainly commissioned by a member of the Russian Royal Family or Royal Court at the time of Catherine The Great. Guy Dennler sold the majority of pieces on his stand, including a pair of Sheraton satinwood card tables at £16,000 and a George III mahogany serpentine chest for £6,850.

New exhibitor Hugh Leuchars had a positive Fair, having to regularly restock his stand. Holly Johnson Antiques sold one of their most important pieces, a Malachite-effect side cabinet by Aldo Tura that had an asking price of £19,500.

British painting was one of the most popular genres at the BADA Fair. Jeremy Taylor of The Taylor Gallery reported the best Fair of his entire career, preparing invoices totalling almost £1million by the end of the Fair. He sold major works from an exhibition of works by Sir Alfred Munnings as well as paintings by Edward Seago, Gerald Kelly, Duncan Grant and Ruskin Spear. Within the first few minutes of the Fair opening, Guy Peppiatt Fine Art sold one of the highlights on the stand, a watercolour by Frances Towne priced at £35,000. Julian Simon Fine Art dedicated their stand to contemporary artist Jonathan Pike, selling around 25 of his works including a large watercolour view of Venice entitled ‘Grand Canal Towards Rialto’.

The Mark Gallery had a successful Fair, noting that there was a surge in sales of Russian and Greek icons to young collectors seeking rare 16th and 17th century works.

Porcelain also reported excellent sales with Roderick Jellicoe commenting that he had had his “best opening day ever”, with major sales taking place in the first few hours. These included a rare Chelsea strawberry dish with an asking price of £26,000 and a large, museum-quality Worcester tureen for £28,000. 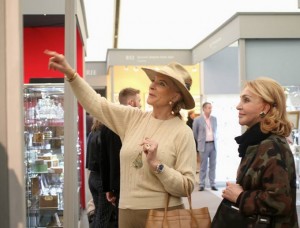 Robyn Robb reported brisk sales, particularly of Chelsea and Worcester pieces. Contemporary ceramics was another profitable category, with Alison Davey of AD Antiques reporting this to be the first time that sales of contemporary pieces had overtaken traditional items of British Art Pottery. She sold several pieces by artists Fenella Elms, Heidi Warr and Peter Beard that were unveiled at the Fair, making two thirds of sales to new clients.

The representation of Asian art at the BADA Fair was boosted by new exhibitor Alastair Gibson. He was pleased to make a number of sales, particularly of Kangxi blue and white porcelain, and to sell to collectors from the UK, Europe and Brazil. Regular exhibitor Laura Bordignon was delighted to sell a highlight of her stand, a beautiful Japanese wood screen of the Meiji era, with an asking price of £17,500 as well as several items of sculpture.

A significant number of portrait miniatures were sold at the BADA Fair. New exhibitor Philip Mould Portrait Miniatures had a successful first edition, selling around fifteen works including a new discovery by artist Robert Home. It depicts Arthur Wellesley, 1st Duke of Wellington and makes an important addition to the iconography of him, as it is Home’s depictions that are most evocative of his image. Ellison Fine Art sold over twenty-five pieces, making new contacts with clients from Russia, Belgium and Poland.

Textiles were popular with collectors, and Gray MCA sold out of their five artists’ textiles by Henry Moore, Ben Nicholson and William Scott within the first two days, having to replenish the stand. Witney Antiques sold a number of samplers and other pieces including an exquisite raised-work mirror dating from c.1660. Christopher & Angela Legge Oriental Carpets sold a fine Uzbek silk embroidery as well as a Turkoman carpet.

Hampton Antiques reported their best ever Fair, selling a variety of decorative items including tea caddies, sewing boxes and decanter sets. One of the finest pieces was a tortoiseshell sewing box of the Regency period engraved and inlaid with silver with an asking price of £9,500. Likewise Amherst Antiques had a very successful Fair and commented that people were queuing at the stand to purchase items including a large Tunbridge ware tea caddy priced at £4,450.

Glass was yet another discipline that proved successful at the BADA Fair. Sylvia Powell reported an increase in sales this year, with particular interest in the Jean Cocteau glass panels that were chosen by interior designer Bill Bennette for the House & Garden Interior Designers’ Selection. The majority of their clients were new contacts, with nationalities including Austrian, Serbian, Turkish and Chinese.

The Charity Gala Dinner, sponsored by Kleinwort Benson, was held on Thursday 19th March and raised £85,600 for The Haven Trust. 180 guests enjoyed dinner in the Cellini Restaurant within the BADA Fair, as well as an auction, and talk by Royal biographer Penny Junor.