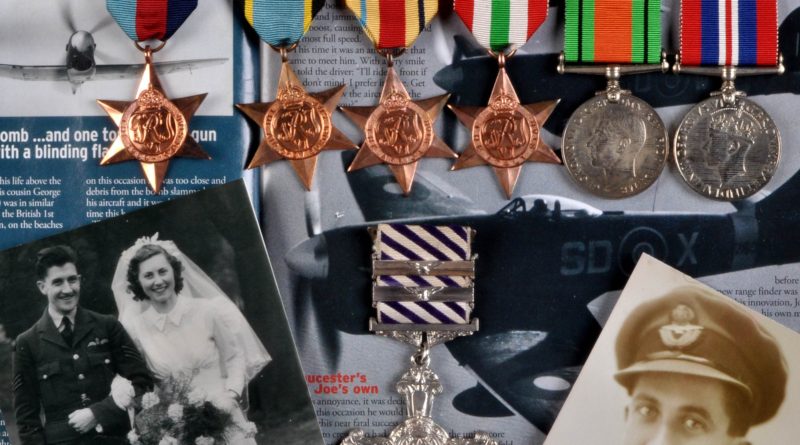 Medals won by unsung World War II hero RAF Squadron Leader Joseph Berry – who was dubbed the Doodlebug Champion for destroying twice as many of the deadly V1 bombs as anyone else – have sold at auction for more than double their estimate. 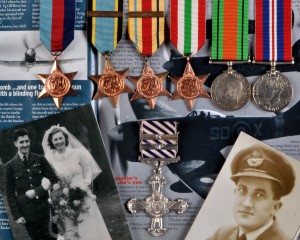 The collection, which included the very rare Distinguished Flying Cross and double bar, plus photographs, letters and newspaper cuttings, went under the hammer for an astonishing £17,500 at the Anderson & Garland Fine Arts sale in Newcastle.

Berry, who was born in Quarrington, Co. Durham and moved to Stampeth near Alnwick where he attended The Dukes School, died in action when he was shot down over Holland in 1944.

The collection was the highest-priced single lot of the two-day auction and went to a collector from the South of England bidding by phone, who battled it out with a local bidder in the saleroom.

“It wasn’t too surprising that a group of medals such as this that were awarded to such a brave and fearless man should do so well. I personally feel it is a good thing that a collector who will appreciate them and look after them will have them, rather than them sitting in the back of cupboard.

“Medals such as these are hard to value and you never really know until the market has its chance. In this case, the bidding stirred up a frenzy.”

The collection was sold on behalf of Berry’s great-nephew, Alex Cann. His mother Chris, from Rothbury, said the family were amazed by the high price. Mrs Cann said: “We’re delighted they’ve gone to someone who is a collector and they’re not going to be locked away in a bank vault. It’s lovely the person wants to meet us and we’ve arranged to see each other next week. It will give us closure to the whole thing.”

In addition, a Waterloo Medal, awarded to John Moore of the Coldstream Foot Guards, sold for £720. The bicentenary of the Duke of Wellington’s victory over Napoleon is being marked today (June 18).

The sale also saw high prices for two Georgian tables, dating from around 1780, which previously belonged to the Fenwick family of Brinkburn Priory near Morpeth and were sold for a combined £19,000 to a London dealer.

Mr Wyrley-Birch said: “They were in the manner of Ince and Mayhew and of extremely good quality, although in used, country house condition.

“We placed a low estimate on these tables to reflect their unrestored condition and a bank of six phones and online interest as well as bids in the room took the selling prices to dizzying heights.”

The market for Norman Cornish paintings is also continuing to go from strength to strength following the death of the acclaimed Pitman Painter last year. The two examples in the auction – one a typical view of the Gantry of Dean and Chapter Colliery and the other of a colliery village – sold for £6,000 and £5,200 respectively. Anderson & Garland will be selling two more Cornish paintings next month.

A surprise discovery of a second edition of Charles Darwin’s ground-breaking On the Origin of the Species by Means of Natural Selection, found by Anderson & Garland in a box of books brought into the saleroom, caused huge interest among local dealers. It sold for £3,200 to a phone dealer, outstripping the pre-sale estimate of £800 to £1,200. 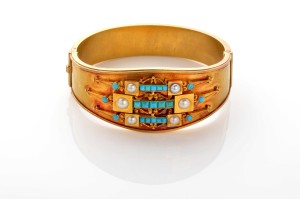 Jewellery also proved popular with bidders. A Tiffany diamond ring went for £8,200, a rare turquoise Giuliano bangle sold to a local bidder for £2,600 and amber again proved hugely desirable to Chinese online bidders, with three amber necklaces going under the hammer for a total of £5,000.

Julian Thomson, director at Anderson and Garland, said: “Overall, 700 online bidders were registered alongside strong phone bidding representation and those bidding in person in the saleroom. It really was a fantastic sale.”