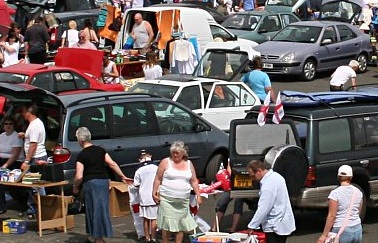 The ‘Boot Fair’ season is in full swing, taking advantage of the summer weather. Where I live, there are two successful regular boot fairs, both much larger than the scatter of less well-attended ones.

The first is run by a village cricket club, with its members acting as car park marshals and the square carefully cordoned off. There is no entrance fee but you can make a voluntary contribution by dropping a coin or two into a bucket guarded by a fast bowler at the entrance. When it started a few years ago it was easy to get in to the parking area on the grass but although the
nominal start time is eight o’clock, anyone arriving after half past seven nowadays will find themselves in a queue of traffic waiting to get in because the parking area is already full. 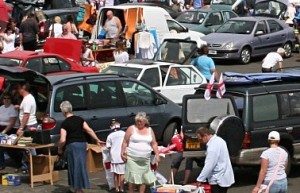 It is possibly the most appealing of local boot fairs in that a high proportion of the stands present genuine domestic bric-a-brac, cast-off children’s clothing and toys rather than the professional goods of regular traders. There is only one paperback book trader, with popular fiction lined up in alphabetical
author order and separately-flagged sections for special subjects. This is in
marked contrast to what used to be the boxes of assorted books, old and young, littered about beside or under stands presenting ornaments and clothes.

Lately the secondhand books seem to have diminished and this might correlate to the increasing reluctance of charity shops to take books too. On the other hand, the junk, from ceramics to metalwork, seems to be much more varied. There is an increase in woebegone brownish furniture and stick-like kitchen chairs of little merit.

The second boot fair is on an airfield, where parking is virtually unlimited. It is nearer to commuter country and so seems to attract more professional
traders, with tools, domestic and kitchen consumables, children’s clothes, car parts and catalogues, hot stands reeking of fried onions, an ice cream van, furniture both upholstered and wooden, china, lamps, toys and vases. It attracts vendors and buyers from a wider area than the cricket club and the atmosphere is less rural.

There is electronic equipment, racks of CDs and horror films, but diminishing
popular fiction. Ornaments go from conventional to a nadir of grotesque
awfulness but fabrics, curtains, linen and clothes are surprisingly restrained.
Garden equipment, tools, gadgetry and spare parts are prominent. The plant
stands are bigger and more professionally organised than those at the cricket club. Fruit and vegetables, like the bakery and greetings card stands, strike one as commercial presentations rather than the surplus of home cultivation.

Collectors of antiques may lament over the time spent in prospecting boot
fairs rather than outdoor antiques markets but the fact is that every now and then these assemblies of domestic rejects turn up exciting finds. These may be principally in the jewellery sections, or among ornaments and ceramics, where the keen collector suddenly spots prey languishing among unremarkable objects.

On one occasion a friend suddenly became agitated when he spotted a Liverpool porcelain cup, saucer and plate amongst an assembly of very mass-produced china. It took all his emotional self-control to instigate casual enquiries before a purchase was clinched.

The thrill of the chase is what impels repeat visits even after drawing a blank for weeks on end. The outdoor boot fair provides a collectors’ fair at a much lower level than antiques markets and it only needs a random find to renew the energy required to persist.

For many ACC subscribers it was not always thus. In days gone by, the chase
took place mainly from shop to shop, in which the stock in both showroom and unrestored condition would be viewed. There was always something to buy and disposal was never a problem. It has taken some time to adjust to today’s conditions and today’s availability of goods.

The advent of the boot fair has been a blessing and a period of good weather ensures plenty of activity before the empty winter sets in. Like the summer season of racing, rowing, tennis and open-air sporting spectacle, the boot fair’s is all too short. We must scramble to enjoy it while the game’s still afoot.