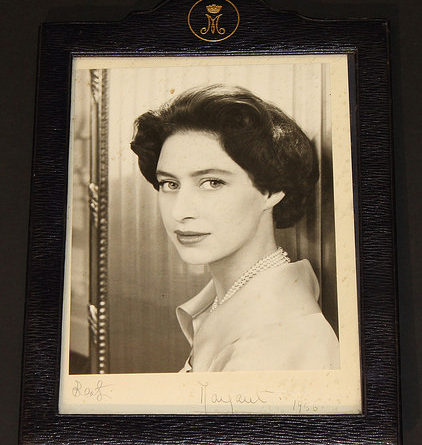 A large collection of Christmas cards and photographs sent by the Queen to a Cotswolds resident has sold for more than £8,000. 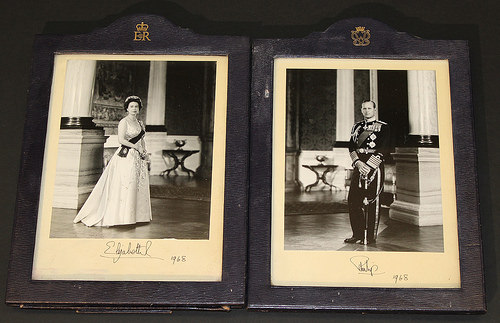 The collection was amassed by Air Vice-Marshal Sir Edward Fielden and his family over 60 years. The majority of the cards – which went under the hammer at Moore Allen & Innocent’s Selected Antiques Sale in Cirencester – featured The Queen, Prince Philip and their growing family from the 1950s to the present day, in casual settings or on state occasions.

The big money, however, was reserved for signed, framed photographs. A black and white portrait of The Queen by Anthony Buckley, signed Elizabeth R and dated 1968, together with a companion photograph of Prince Philip by the same photographer, signed Philip and dated 1968, achieved £1,150.

A Hugh Cecil black and white photograph of Edward VIII in military dress signed Edward RI and dated 1936 sold for £820, while a framed and glazed photograph of George VI and Queen Elizabeth with Princesses Elizabeth and Margaret by Dorothy Wilding of London, signed George RI and Elizabeth R, 1937 achieved £750. 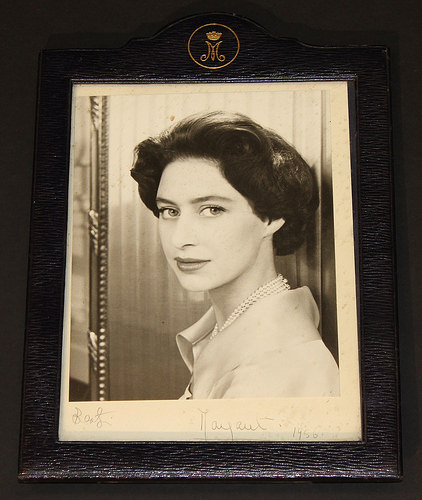 And a Cecil Beaton black and white portrait of Princess Margaret, signed by Beaton and “Margaret”, dated 1956 achieved £700.

The collection also featured a copy of A King’s Story, The memoirs of HRH the Duke of Windsor, which was signed by the former Edward VIII and dedicated to ‘Mouse’, Sir Edward Fielden’s nickname, due to his discretion and self-effacement whilst acting as Captain of the King’s Flight and personal pilot to King Edward and his successor, George VI. It achieved £280.

Meanwhile, a first edition of the same book, number 150 of a limited edition of 250 and signed by the Duke of Windsor, achieved £800.

Less prominent members of the aristocracy were responsible for the highest lot price of the day, however. A matching pair of oil portraits of Andrew Barker standing in front of his grand new House at Fairford Park – or at least the artist’s impression of it, as the house in the painting contains some architectural features not found in the 1661 building – and his grand-daughter Esther Lambe achieved £11,000; well in excess of the £5,000 to £8,000 estimate.

The portraits were painted in the manner of Sir Godfrey Kneller, the leading portrait painter in England during the late 17th and early 18th centuries. Sadly, the fine country house in the background of the painting was demolished in the 1950s, and is now the site of Fairford’s comprehensive school. 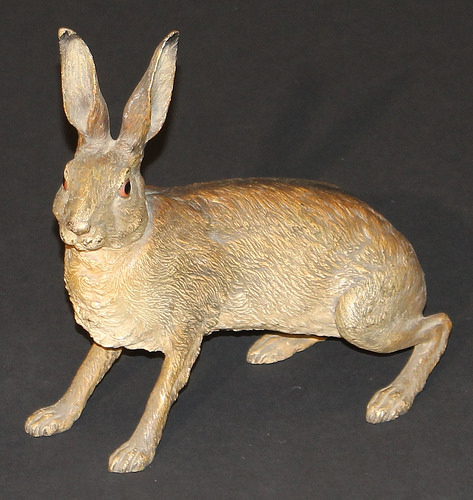 An emblem of the Cotswolds, the hare, achieved the second highest lot price, selling at the top end of its £4,000 to £5,000 estimate. The circa 1900 cold painted bronze of a hare by Franz Bergman of Vienna, measuring 19cm in length, was sold alongside a woodcock, which achieved £2,000, and a partridge, which made £1,800.

And a book celebrating the work of locally-based artist Damien Hirst achieved £1,900, just shy of its £2,000 to £3,000 estimate. The copy of I Want to Spend the Rest of My Life Everywhere, with Everyone, One to One, Always, Forever, Now (first published in 1997) was sent to the vendor, unsolicited, after he told the artist he’d lost his copy in a house fire. Inside the book, Hirst wrote: “For Michael, So sorry to hear about your loss! Keep Smiling xxx” His signature was accompanied by a sketch of his trademark shark, a butterfly, and a skull, a nod to his diamond-encrusted human skull entitled For the Love of God.

Elsewhere in the sale, an oil painting of cattle attributed to Thomas Sidney Cooper (1803-1902) sold for £3,000 – the third highest lot price of the day – while a seemingly unremarkable circa 1900 Howard of London armchair with very plain turned legs came in at number four, with a winning bid of £2,900 – comfortably exceeding the £800 to £1,200 estimate.

And taking the number five spot was a chess set, turned in ivory from the buttons rescued from the organ of The United Reform Church in Putney during its bombing in 1944. Carved by A W Jones in the early 1980s, the chess set, which achieved £2,900, was one of only two sets produced: the other is owned by Prince Charles.