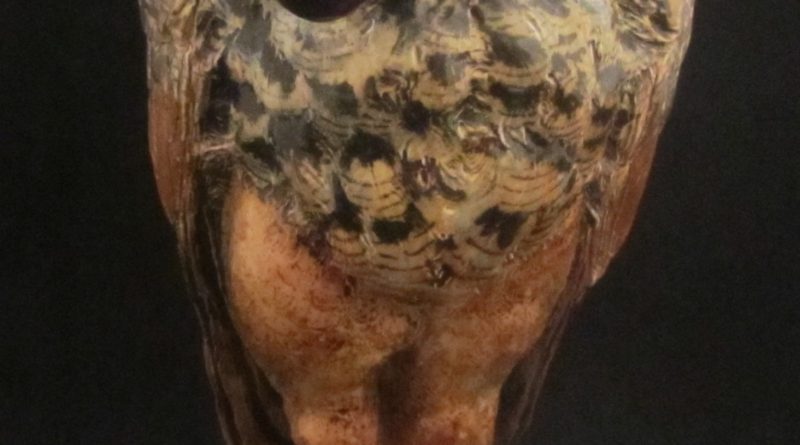 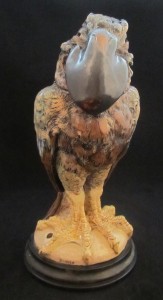 Alison Davey, from AD Antiques, set a world record for Martin Brothers when she paid £91,500 for a bird jar. She reflects on the current market for the distinctive stoneware.

Martin Brothers’ birds are, for most of us, aspirational items. Back at the time of their creation they were sought after by London’s chattering classes; modelled in a satirical ‘Punch-like’ manner on leading political and commercial figures and commissioned by aristocratic figures such as Lord Faringdon and Sir William Drake.

In the 1890s, when demand for the works of the Martin Brothers was at its height, special works were kept out of the public’s gaze at their retail premises in Holborn where they were saved for the more discerning client. Perhaps the appeal lay in the Victorian’s curiosity in the macabre, or maybe it reflected the social transitions of the day, or perhaps it was just keeping up with the Jones.

The story behind the Brothers makes for compelling reading; work kept under floorboards, fires, insanity, and untimely deaths. Then, as now, the appeal of the Martin Brothers comes in part from their incredible story. 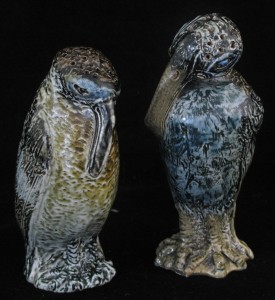 In recent years the market for the Martin Brothers’ Birds has increased exponentially. Interest was kindled back in the 1970s with Richard Dennis’ selling exhibitions, where he put together superb collections of the brothers’ work. In those days, it was relatively easy to source work as the fashion was to discard fashions of the preceding decades in favour of the modern home.

Dennis revived the aesthetic and commercial interest in the factory and following this came several other important international exhibitions. During this time the appeal of the birds moved beyond the domestic market and, anecdotally, I would suggest that 90 percent of the birds sold end up roosting in overseas collections. Birds have now pushed through the six-figure ceiling tripling in price in the last 15 years. This is a significant trend for British ceramics as historically they have been undervalued against works on paper, bronze or even Oriental ceramics.

For me the attraction lies in the fact that each one is totally unique having been hand crafted by one of the founding fathers of the British art pottery movement. Each piece is indeed a major contributor to the Arts and Crafts movement and each bird represents an important piece of British art history in clay. 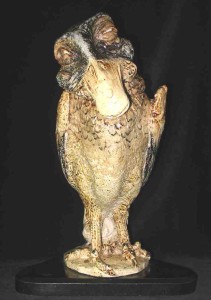 As with many luxury goods, fakes have emerged over recent years and collectors are advised to exercise caution when looking to buy. Several years ago I saw a fake bird sell through a regional saleroom for £15,000 and I am offered fake pieces on a monthly basis. Furthermore the restoration of ceramics has become so skilled that, to all but the most trained and experienced eye, it is invisible. Restoration can reduce the value of a piece by more than 50 percent.

For these reasons I would recommend buying from an expert in the field where collectors will have a guarantee of authenticity and condition. The work of the Martin Brothers is potentially an excellent investment even with the appreciation in the market and at prices ranging from several hundred for tiles or miniature gourd vases up to a hundred thousand pounds it is still a market accessible to most.

The four Martin brothers – Robert Wallace, Walter Frazer, Edwin, and Charles –set up a studio pottery in Fulham, London, in 1873, before moving to Southall in 1877 where they remained until the studio’s closure in 1914. 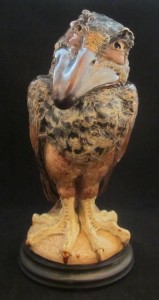 Robert Wallace, the genius responsible for modelling the birds began his apprenticeship working on Charles Barry’s redesign of the Houses of Parliament after it was damaged by fire in the mid 19th century where he worked on grotesques. Wallace headed the firm while Walter did most of the throwing, glazing and firing and Edwin did most of the decorating. The other brother Charles ran the shop that they had acquired at High Holborn.
Wallace was the originator of the grotesque birds with big beaks and sly eyes, as well as jugs in the shape of human heads with leering expressions. Much of the Martins’ early work was blue and grey, later a dark brown was used and later still greens and blues and browns. The colouring was always low in tone. Relief and incised decoration was used, much of it in floral forms. Some of the later pots and vases were inspired by vegetable forms such as gourds and marrows with vertical ribbed designs and textured surfaces.

While anthropomorphic bird figures have long been seen as the most desirable products of the Martin Brothers’ art pottery, watch out for the brothers’ other grotesques which are coming to the fore.

One thought on “Guide to Martin Brothers’ birds”