A rare Chinese vase made for Imperial China in the 18th century set pulses racing at Hansons Auctioneers recently when it sold for an incredible £300,000.

Commenting on the find, Charles Hanson remarked, “I am always aware of how fertile our lands in Middle England can be, and I was delighted to unearth this vase, which despite being over 200 years old was in remarkably fine condition. We expected the vase to make between £30,000 and £50,000 but as it was we had buyers all over the world, particularly in China, competing for this magnificent vase.” 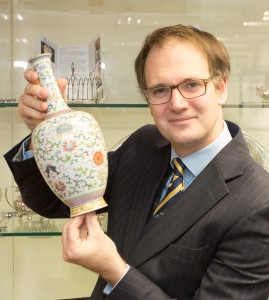 He continued, ‘The art of China in the 18th century under Emperor Qianlong was a remarkably artistic time in Chinese cultural history. The finesse of porcelain reached an all-time high, and such porcelain for this period is considered to be so remarkably special. Whilst China was exporting so much in the 17th and 18th centuries, Emperor Qianlong and fellow courtiers and noble families would acquire such porcelains for their palaces in China.”

Beautifully painted with chrysanthemums and foliage, Mr Hanson remarked that it felt quite magical to handle. “The porcelain was so translucent, almost like a hardstone jade, and it had an extra quality which is quite to put words to in fact.”

He said, “Auctions are all about theatre, drama and romance, and as we arrived at the lot, the sale became a spectacle to behold. It was wonderful to be part of it, and certainly customers and colleagues alike caught the auction atmosphere – a moment like nothing else.” Bidding quickly soared past £100,000, and it was left to two mainland Chinese buyers, and a London collector to pursue it from £190,000.

Mr Hanson went on to say, “It was a delight to announce we were at a quarter of a million pounds, and when the gavel finally fell at £300,000 it really was quite emotional. This sale beats Hansons previous auction record of £192,000 for a Chinese twin handled vase, which sold in March 2011.”

The sale of this vase shows that the market for Chinese porcelains and important Works of Art is still extremely buoyant amongst higher end collectors throughout the world, with two or three Chinese buyers flying in to view the vase, and agents for others sent from Beijing and further afield.

We thrive on home visits, never ‘judging a book by its cover’ as we are often surprised by what we find within a homeowners four walls, this certainly being the case on this occasion. This Chinese vase, uncovered in Leicestershire, had come from a deceased estate, a lady of some distinction and we were honoured to give it a wonderful send-off via our worldwide market.