A rare miniature portrait of Elsie Bowerman, Early Suffragette, RMS Titanic Survivor and first Woman Barrister at the Old Bailey is up for sale at auctioneers Duke’s in Dorchester. 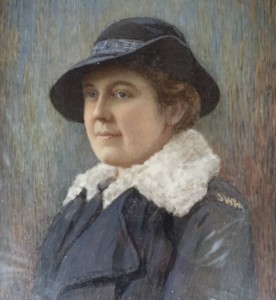 e lifeboat (no. 6) as Tim’s ancestor Robert Hitchens and about 22 others including Frederick Fleet, the lookout who had first spotted the iceberg.

Bowerman led a remarkable life, which encapsulates some of the most important events and movements of the early 20th century.

On 10 April 1912 Elsie and her mother boarded the Titanic at Southampton as first class passengers for a trip to America and Canada. They occupied Cabin 33 on Deck E of the RMS Titanic. The story of its later sinking, days into the voyage, is well-known with over 1,000 drowning.

The two women were rescued in lifeboat no. 6, the same lifeboat as Mr. Medhurst’s great grandfather, and some of the main characters from the Titanic disaster, including Molly Brown, who was featured in the feature film of the event.

Elsie wrote of the event, ‘The silence when the engines stopped was followed by a steward knocking on our door and telling us to go on deck. This we did and were lowered into life-boats, where we were told to get away from the liner as soon as we could in case of suction. This we did, and to pull an oar in the midst of the Atlantic in April with ice-bergs floating about, is a strange experience.‘

Much about her time on the lifeboat was also recorded. ‘Molly demanded that the women be allowed to row to keep warm. Hitchens tried to stop her, but Molly told him he would be thrown overboard if he attempted to stop her. Both men eventually gave in and Molly took control. She had the women rowing and distributed her furs and other clothing to the freezing passengers.‘

Prior to her experience on the Titanic, around 1910 Elsie became an active member of Mrs Pankhurst’s Women’s Social and Political Union (WSPU).

At the outbreak of the First World War, she started as a paid organiser for ‘The Woman’s Party’, who worked to encourage women into the war effort, and men to enlist. She travelled around the country talking at different towns and drawing crowds of up to 10,000. At Bath, she shared the platform with Christabel Pankhurst.

In 1916 Elsie was encouraged to become an orderly in a Scottish women’s hospital unit which served Serbian and Russian armies in Rumania. Arriving just as the allies were defeated, her unit joined the retreat northwards to the Russian frontier. In March 1917 Elsie was in St Petersburg and witnessed the Russian Revolution at first hand.

Elsie returned to England in 1917 and continued her suffragist work. She travelled nationwide with the Pankhursts as an organizer of mass meetings at which suffrage leaders gave patriotic speeches to encourage men to join the Forces and women to volunteer for war work.

After the War in 1918, Elsie became secretary of the Women’s Guild of Empire. She studied law and was admitted to the Bar in 1924. She was the first woman barrister at the Old Bailey. During World War II she worked for two years with Women’s Voluntary Services, and after a time at the Ministry of Information spent three years with the Overseas Services of the BBC. In 1947 she went to the United States to help set up the United Nations Commission on the Status of Women. 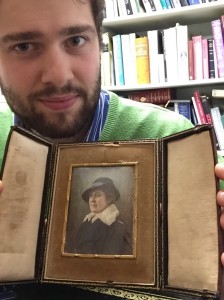 Auctioneer Tim Medhurst commented, “This small portrait is an amazing snippet of history in which you can see a Woman of survival dedicated to equal rights.” He continued, “It is a wonderful thing to be able to look at the same lady who would have looked at my Great Grandfather over 100 years ago on board a lifeboat in the middle of the Atlantic Ocean.”

Amongst many achievements, Elsie established the Dove-Bowerman Trust which is still active today. A Blue Plaque was unveiled on 19th November 2005 at 23 Silchester Road, St Leonards, in memory of Elsie.