Auctioneers Duke’s of Dorchester is hosting a preview of pictures and works of art from the collection of the late William Gronow Davis. The exhibition is being held in Duke’s new gallery in Brewery Square, Dorchester until 3rd February. 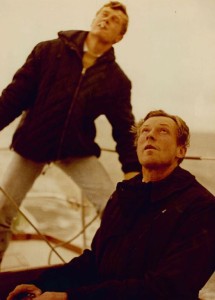 Duke’s of Dorchester have been instructed to sell the contents of King John’s House following the death of the flambouyant William Gronow Davis (far left) last year. The collection will be auctioned by Duke’s later in the spring.

Gronow Davis was the lifelong partner of the late Michael Pitt-Rivers (right in picture), and he moved to King John’s house in 1961. He was an established artist, and held bi-annual exhibitions. He and Michael Pitt-Rivers travelled extensively and in great style, and these travels inspired much of the subject matter and the inspiration for his paintings.

In addition to a passion for sailing and opera, they were both keen collectors of art, and their impeccable good taste and refined eye for quality is self-evident in the collection coming up for sale at Duke’s on April 14th. Selected Asian works of art will be sold in another specialist auction on May 20th. 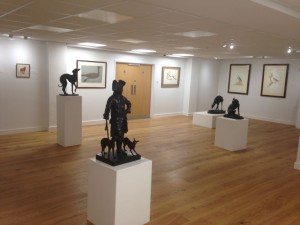 The preview of the collection runs until 3rd February and includes prints and works on paper by Elisabeth Frink, who was a frequent visitor to King John’s House and a friend to Michael Pitt-Rivers and William Gronow Davis. A typical Frink (coloured monochrome print in terracotta) of a stallion rolling on its back is estimated at £2,000-£4,000, and a mixed media study of a man with a baboon is estimated at £3,000-£6,000.

William Gronow Davis was also passionate about his beloved whippets and he formed an impressive collection of sculptures in bronze and marble. The preview includes seven large-scale bronzes, including a surperbly rendered bronze of Frederick the Great with his whippets, by Johan Godfrey Schadaw (1764-1850), which is estimated at £5,000-£10,000, and a bronze of a whippet looking into a bowl of food, by the Parisian sculptor Henri Alfred Jacquemart (1824-1896), which carries a pre-auction estimate of £8,000-£15,000.