A limited supply of good naïve paintings on the market in recent years has resulted in an increased awareness of their charm and desirability. Folk art and country specialists, Christopher Richardson and Doris Urquhart, consider this delightful genre and its enduring appeal. 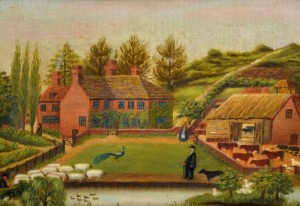 The school of naïve painting in England during the 19th century represents the work of mostly self-taught artists who recorded what they observed in their own particular way. Its essence is that of a highly personal and individual art form, both in subject matter and technique. Embracing a wide variety of media, the paintings can range from oils on panel, board or canvas, to works on paper in watercolour or pastels.

They typically depict the individual painter’s own vision of scenes of ordinary life and images of the people and animals with whom he shared his everyday existence.

The images are characterised by a freedom and honesty of expression, an innocence and a literalness that makes these paintings happy and delightful things to live with.

The strong graphic quality and use of pattern that is frequently present in the paintings gives them a modern look, which enables them to fit happily into the most contemporary of interiors, as well as more
traditional settings.

Like any graphic piece of folk art, good naïve paintings can hold their own with most periods and types of furniture. They can create an amusing diversion to counteract the sombre nature of a solid oak interior, say, or the lack of colour in a roomful of mahogany. They possess a lightness and a humour, to lift the mood and speak directly to the viewer of a less frenetic age. The charm of the paintings is often found in their inaccuracies, their distortion of scale and perspective and their quirky originality of vision, instead of exact recording. A notable characteristic of these paintings, one that they share with other examples of folk art, is the way they can often produce laughter, or a wry smile at least, in the beholder. 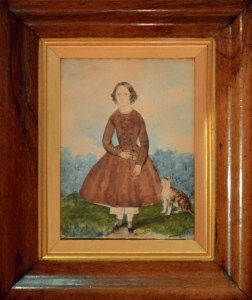 Because of the amateur nature of the naïve school in the 19th century and its purpose of recording the everyday lives of the painters who belonged to it, there are numerous examples of the genre to be found. It is a perfect genre to collect: not only do the paintings provide a fascinating insight into the lives of ordinary people from a former age, they can be displayed in a wide variety of interiors; they possess their own unique charm and amusement and, not least as a consideration, are relatively inexpensive for original works of art. Although the market for these paintings is increasingly popular, the genre has not yet been fully explored and still offers exciting possibilities for the collector and dealer alike.

Naïve portraits of this period were mainly done in oils and watercolour, or occasionally pastels, often by one family member of another. During the 19th century, well-to-do families commissioned portraits of themselves by trained and sophisticated artists. But for the majority of families this was not affordable. In advance of the invention of photography, these simple portraits were the only record to be made of the character and appearance of one’s nearest and dearest. 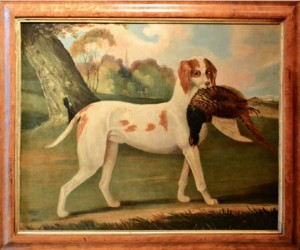 Animals, both livestock and domestic pets, were often chosen by the naïve painter as his subject matter. The animals usually formed an intimate part of the daily lives of those painting them, from the working
shire horses of the farmer to poultry and pigeons, as well as family pets, of course, often depicted alongside their owners.

Another common subject of naïve 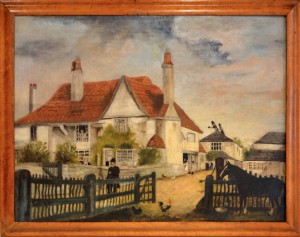 images is that of the village pub, parish church, dwelling house or farm in which the painter lived out his days. Sometimes the painter specified the date, subject and location of his painting, but all too often these details are omitted. This is probably because the pictures were mostly intended for the benefit of the family who knew only too well who and what the subject matter was. A lack of literacy might also have been a contributing factor. Understandable though the causes are, such omissions can be slightly frustrating to the collector but the charm of the paintings usually outweighs any such frustration.

One thought on “Naïve but nice – guide to Folk Art”