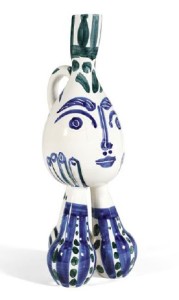 Sotheby’s London is to hold a sale of Important Ceramics by Pablo Picasso From 1947 to the early 1970s on 5th April. The sale will feature a wide range of over 230 of the artist’s ceramics, offering affordable prices starting at estimates of £800, upwards to £80,000.

Picasso’s engagement with ceramics resulted in a body of work that demonstrates the same passion he brought to his paintings, sculptures and prints, characterised by a clear sense of freedom and innovation. 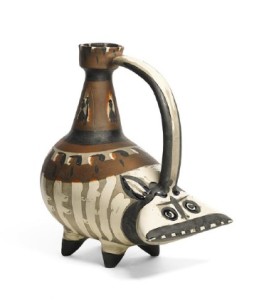 It was in the summer of 1946, during a stay at the nearby coastal resort of Golfe Juan in the South of France, that Picasso first met Suzanne Douly Ramié and Georges Ramié in their celebrated Madoura studio in the town of Vallauris, which opened in 1938.

Picasso met Ramié by chance and was instantly excited by ceramic as a medium, so much so that he sat on a bench and spent the entire afternoon modelling small clay animals by hand. 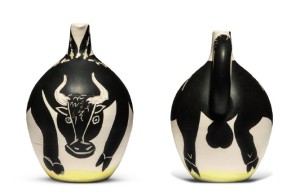 Pottery always had a special significance for Picasso due to its direct links through materials, techniques and forms to ancient Mediterranean tradition. Running concurrently with his other works,
ceramics allowed him to pursue a rich interplay between imagery and form.

Picasso was persuaded to make numbered editions of some of his ceramics. These multiples, of which there are 633, were usually made in editions of 25 to 500. The editions were either impressions taken from moulds 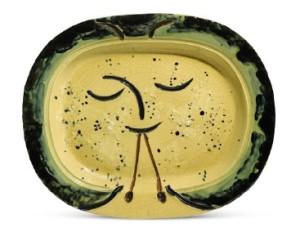 worked on by Picasso – some of which were left unpainted or were worked on by Madoura staff following original Picasso designs – or authorised replicas of his original designs.

The opportunities for invention by fusing together the arts and painting and sculpture coincided with the spirit of optimism and renewal Picasso felt in the post-war period. He reinvigorated the tradition of ceramics with an inexhaustible array of forms, techniques and imagery, and through his editions he shared his vision with the world.

If you’d like to learn more about collecting Picasso ceramics, read our guide.

One thought on “Picasso ceramics at Sotheby’s”