Dreweatts & Bloomsbury Auctions is to hold The Transport Sale on Wednesday 27th April with over 150 lots on offer in Berkshire.

The Transport Sale will give buyers the opportunity to acquire fine model engineering, transport related items and railwayana, with estimates ranging from £5,000-£40,000. The auction has attracted various model locomotives in a range of gauges as well as a large collection of scale working model stationary steam engines from across the UK.

Leading the transport related items is the original Baglan Hall Great Western Railways nameplate which was removed from the engine when the train, like so many others, fell victim to the Beechings’ cuts inflicted on the British rail system in 1963.

Rescued from R. Hayes scrapyard, Bridgend, the nameplate was gifted to Sir Godfrey Llewellyn, whose childhood home was Baglan Hall, it then passed to his son Sir Michael Llewellyn. The nameplate hung over the fireplace in Sir Michael’s home until recently and is now being offered for sale by order of the executors of the estate of the late Lady Janet Llewellyn, it is estimated at £3,000 – 5,000.

The auction house said there are several star lots in the sale, notably amongst the larger locomotives. One highlight with an estimate of £40,000 – £50,000, is the 7 ¼ inch gauge model of a 4-6-2 Britannia Class 7MT Pacific Steam Locomotive No 70045 “Lord Rowallan”, built by Mr Alan Priest of Wokingham. Having taken fourteen years to construct, this exceptional locomotive is regarded by many in the model engineering world as the finest fully running and working example of its kind and has been seen out on the 7 ¼ inch tracks all over Great Britain. 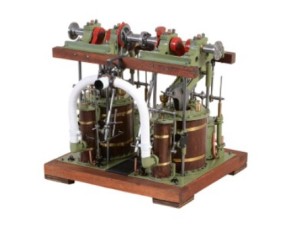 The star lot in the stationary section must be an exhibition quality model of a 19th century paddle steamer engine based on the original full size HMS Princess Alice built in 1843 and fitted with a ‘Maudsley Annular’ engine. The has an estimate of £5,000-£6,000.