As part of its regular Antiques & Interiors sale on Friday 15th April, Tennants is holding a specialist section of Antiquities & Sculpture.

The auctioneer said that the new specialist section would be a feature of the already busy sales calendar and Mark Jones, who catalogued the section, has been delighted with the response. 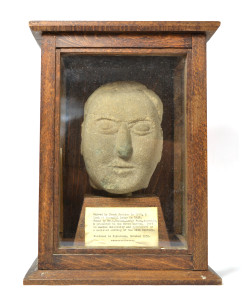 The section will comprise of just over 100 lots and will include such item as an English medieval carved stone head of a cleric, circa 14th century, carved almost in the round in millstone grit.

Mark said “It was found by Mr A Hudson of Scargill amongst rubble while cleaning out an outhouse. It was subsequently presented to The Bowes Museum and then examined and authenticated by Rosemary Cramp, lecturer in Archaeology at Durham University. A stylistically similar head was later found at Bowes, three miles from the current head.”

Another expected highlight is an Egyptian carved green stone heart scarab, possibly Third Intermediate Dynasty.  The piece features hieroglyphs and a worn surface, leading to a pre-sale estimate of £700-1000.

Other Lots will include a pair of Roman bronze hydria handles, circa 100 BC-100 AD, decorated with grotesque masks, and some large Greek/Central Asian pottery vessels.  Estimates for the 100 lots will range from £80 – £3,000, with Tennants hoping to attract interest from buyers at all levels.