Roseberys London was the scene of a classic rags-to-riches story recently at their specialist Islamic & Indian Arts auction in mid-April. A large Indian miniature painting, originally bought by the vendor at a car boot sale for just £40, exceeded all expectations to sell for a final staggering price of £92,250. 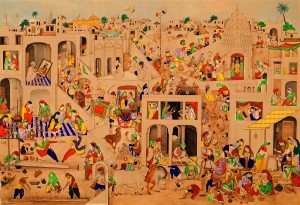 A few months before the auction a London-based taxi driver walked into the auction rooms for a valuation on a painting he had purchased some 30 years previously from a car boot sale. He had even haggled the price down from £60 to £40. It was taking up too much room and he fancied a change of décor so decided to bring it to the auction room with the hope of it being entered into the auction house’s specialist sale.

The painting depicted the walled old town of Amritsar with the Golden Temple (Harmandir Sahib) in the background which is considered the holiest gurdwara, or religious complex, of the Sikh religion. Further interest in the painting lies in the image of the artist who holds a portrait of a Sikh personage of important notability. The framed 19th century work is paper laid on board and measures 59cm x 85cm.

As the bidding commenced, the work was coveted by bidders from across the globe via seven telephone lines and in the room. The lot eventually sold to an anonymous buyer on the telephone.

Director and specialist Peter Greenwa, who phoned the vendor after the auction, said, “It was great to tell the vendor how well his picture had done. It is the moment we all strive for as auctioneers to be able to deliver a positive result. What made it even better was the vendor told me what a bad day he was having as his taxi had a flat tyre and he wasn’t able to go to work. Having heard the news he decided to give himself the weekend off!”