Sworders will offer a fascinating insight into the working mind of celebrated film director Stanley Kubrick with one of the lots in their ‘Books and Maps’ auction on April 26th. 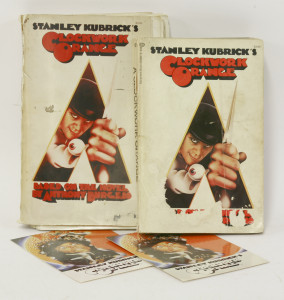 The Essex saleroom has secured what appears to be Kubrick’s own annotated proof copy of the first half of the illustrated screenplay to A Clockwork Orange, which he published when the film was released in 1971.

The unique pre-publication volume of reels 1-8 (of 16) is completely disbound and most pages are loose (pages were originally only glued in), but includes numerous hand-written instructions concerning the position, size, etc. of the pictures as they should appear in the book, along with corrections to the captions, in handwriting typical of Kubrick (in red and green ink).
Specialist Michael Kousah has compared the handwritten corrections in the book to other examples of Kubrick’s handwriting, noting that not only does the writing match, but that the corrections made here have been adhered to in the final printed book. 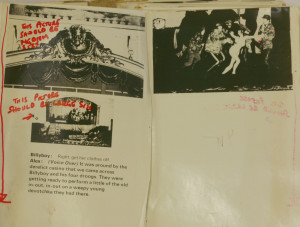 In his introduction, Kubrick wrote: “I have always wondered if there might be a more meaningful way to present a book about a film. To make, as it were, a complete graphic representation of the film, cut by cut, with the dialogue printed in the proper place in relation to the cuts, so that within the limits of still photos and words, an accurate (and I hope interesting) record of a film might be available… This book represents that attempt.”

The lot, which comes to auction from a collector who has owned it for a number of years, also includes a paperback copy of the complete printed book. NY, Ballantine, 1972 (reels 1-16) showing that the instructions and corrections were followed.