A list of women artists who have played a key role in the art world and whose work is currently growing in demand has been compiled by online auction site, Barnebys. 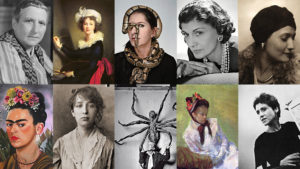 The site has extracted search information from its database of over 1,5 million monthly visitors to its affiliated 1,600 auction houses to reveal the most sought-after female artists, both living and dead.

Topping the list are searches for Louise Bourgeois, best known for her monumental sculptures, and works by Cindy Sherman, the American photographer who produces celebrated conceptual portraits.

A spokesperson for Barnebys said, “This database shows clearly that a revolution that has taken centuries to arrive is underway in the art market and is sending prices for the work of women artists rocketing. For centuries women have been the muses of many a great artist but few have been acknowledged as artists themselves. In the last few years all of that has changed.”

The sale of Georgia O’Keeffe’s painting Jimson Weed / White Flower No. 1 sold for $44.4 million at Sotheby’s in 2014, setting a new world record for a work by a female artist and demonstrating that big money was being paid for women in the artworld.

Louise Bourgeois was a French visual artist, recognised for her monumental sculptures. Although not affiliated with a specific movement, she addressed women’s issues based on her personal experience. She especially dealt with the concept of the mother-daughter relationship, the role of the father and motherhood.
In an almost therapeutic way, Louise Bourgeois reflects her childhood in her works. The phallus represents the father and the spider represents the mother. Her mother died young and her relationship with her father was difficult. for Louise Bourgeois’ creation was vital to survival. “Art keeps us sane,” she 2said.

Louise Elisabeth Vigée-Lebrun is still considered one of the best portrait painters of her time. As women were just starting to join the Academy (the institution in charge of regulating and teaching painting and sculpture in France during the Ancien Régime), Elisabeth Vigée-Lebrun was already the favourite painter of Queen Marie-Antoinette and her Court in Versailles. Vigée-Lebrun was famous the world over and her mansion was the place to be for fashionable Parisians. In 1783, she presented ‘La reine en gaule’ at the Paris Salon. The painting showed Marie Antoinette in muslin cotton, generally used for underwear. Under pressure, Vigee-Lebrun withdrew the painting and replaced it with a portrait of the Queen in a more traditional dress.

Mary Cassatt was an American painter and printmaker and an important figure of the Impressionist movement. More a portraitist than a landscape painter, she joined Degas, Pissaro, and Morisot in her taste for outdoor painting, her sense of colour and her search for realism. In 1882, the death of her sister marked a turning point in her career. Children and mothers then become her favourite subject. In 1890, after visiting an exhibition of Japanese prints, she became fascinated by this style of art. Her mastery of the technique of aquatint (a type of etching) was admired by her colleagues.
In 1904, she received the Walter Lippincott Prize for her painting Caressesbut but she refused it. That same year she was awarded the Legion d’ honneur.

Sculptress Camille Claudell had an turbulent life. For ten years, she had a passionate love affair with sculptor Auguste Rodin (1840-1917). Partners in art, they created several sculptures together, including Le Baiser (1886). Despite their breakup, she inspired Rodin all his life. Rodin never doubted her artistic genius. Claudel’s works were innovative, she captures the intensity of movement as few else can. After an illegal abortion in 1892 she gradually suffered a mental breakdown and died in an asylum in Montfavet (Vaucluse, France). She is now considered one of the greatest sculptors of the 20th century.

Suzanne Belperron was a jewellery designer who many argue is one of the most important figures in the history of French jewellery. As a designer for Boivin, she created very feminine and sensual pieces. She was particularly fond of gemstones (citrine, peridot, amethyst) and multi-coloured jewels. Boivin jewels are rarely signed as she  said: “My style is my signature.” Inspired by nature and foreign cultures, Belperron played with these influences and styles. Her jewellery quickly became the luxurious item that embellished the outfits of the most famous and fashionable couturiers.

A victim of poliomyelitis at the age of six, Frida suffered from a bus accident that kept her in bed for months. And so she began to paint a series of self-portraits using a mirror placed over her bed.
Living in Mexico, part of a patriarchal society, her surrealist paintings reflected her desire for freedom and travel, but also her frustration of not being able to have children due to the numerous surgeries she underwent. Frida Kahlo externalised all her sufferings through her paintings, in a fight against the life she was given.

Diane Arbus discovered photography and created her own style to immortalise those on the margins of society at the time. People who were Transgender, disabled twins, dwarves … anyone out of the ordinary was of interest to her. Thanks to Arbus, people discovered the huge diversity of the American population. Both praised and criticized in her lifetime, Diane Arbus left a legacy through her vision of humanity.

Marina Abramovic is like no other artist. Through performance art, she pushes the boundaries of physicality, using her body as an artistic creation and performance tool, and tests her body to the limits. In 2012 at MoMA, she sat for seven hours in a chair for six days a week, staring at each person in the seat opposite to her. This artistic performance which lasted more than 700 hours is one of the longest ever conducted. Marina Abramovic perceives performance as a means of expression with the outside world.

Gertrude Stein was an American writer better known for her art collection than for her writing talents. In love with France, Gertrude lived in Paris and was an ambassador for modern art, including Picasso and the Cubists. In a relationship with Alice B. Toklas for nearly forty years, Gertrude Stein became one of the greatest collectors of her time. Her talent for spotting young painters was outstanding.
Matisse, Picasso, Picabia, Balthus… all had paintings hanging in Gertrude’s apartment, 27 rue de Fleurus in Paris.

Coco Chanell is a symbol of French elegance. She revolutionised fashion with her monochrome creations. She began her career in fashion as an atelier in Paris, Deauville and Biarritz. She then went on to create her own clothes that she would wear on public occasions, which quickly had her being noticed for her talents as her designs were different from the traditional dresses women were wearing during that period. Playing with feminine and masculine codes, Chanel created comfortable, stylish and practical clothes. She would adorn her simple elegant creations with stunning accessories, and today, of course, the design house is known the world over for their classic designs, experimental jewellery and handbags.