A rare, rediscovered portrait of Jane Seymour, third wife of King Henry VIII, is coming up for sale in Cheffins‘ Fine Art auction on June 15th and 16th. 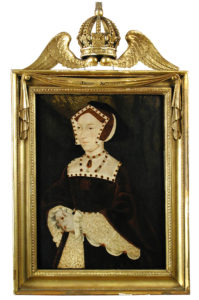 The lost discovery of the Queens portrait, from the Cambridge townhouse of a family of distinguished academics, derives from the prime original which Holbein painted shortly after the sitter’s marriage to the King, which is now in the Kunsthistorisches Museum, Vienna and a preparatory drawing is in the Royal Collection at Windsor Castle.

The portrait shows Jane  wearing  a pear-shaped pendant of rubies and peals, later seen in portraits of Katherine Howard, Henry’s fifth wife, and she is surrounded by an elaborate frame surmounted by the Royal Crown carried by an angel’s wings. The present painting is on a panel which has a felling date of post circa 1532 and it is therefore perfectly possible that the present painting was worked on in Holbein’s studio during his lifetime.

Also in the sale is a small  John Constable RA (1776-1837), drawing of ‘A fishing boat on Brighton Beach,’ circa 1824, (17 x 17cm)  would most likely have initially been made by Constable in his large sketchbook, which would have eventually have been dismantled.  This pen and brown ink over pencil  is believed to have belonged to  the artist’s last surviving child, Isabel Constable, (1822-1888), and then by descent to the current owner.

Constable’s visits to Brighton began in 1824 where  he took a house for a few months with his wife Maria and their children. He then returned on many occasions where he completed a series of drawings inspired by  the fishermen and their boats.