Bonhams will lead the Post-War and Contemporary Art season with a spectacular Andy Warhol painting of Chairman Mao, estimated at £580,000-780,000, to be offered at its New Bond Street site on 29th June. 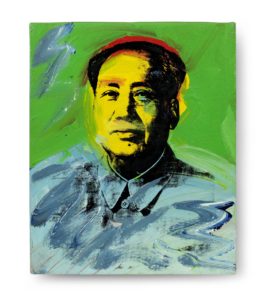 The stunning, densely-textured painting comes fresh to the market having originally been handled by the artist’s legendary dealer Leo Castelli in the 1970s. Renowned as one of Warhol’s most significant, signature images, the Mao paintings feature in many of the world’s most prestigious public and private collections worldwide.

Warhol was transfixed by the People’s Republic of China in 1971. ‘I have been reading so much about China,’ he said at the time. ‘The only picture they ever have is of Mao Zedong. It’s great. It looks like a silkscreen.’ Inspired, Warhol made his first picture of the communist leader the following year. The Mao series is based on a photograph taken from the cover of The Thoughts of Chairman Mao – otherwise known as the Little Red Book, of which almost a billion copies were printed in China, leading to an acute paper shortage during the Cultural Revolution. During the early seventies, Warhol used to carry the Little Red Book around in his pocket. Eric Shiner, director of the Andy Warhol museum, describes the artist as “smitten with communism – with everyone wearing the same clothes and reading the same books”.

In the early 1970s, after a decade of screenprinting, Warhol returned to painting. His Maos tend to be more painterly than his earlier pop art, developing from the relentless replication of the 60s into more personalised, one-off works combining silkscreens with gestural painted additions. This particular piece has unusually thick impasto, with expressive brushwork in subtle blue hues and a halo of vivid scarlet interrupting the almost blinding vibrancy of the acid green background.

“It is one of the finest – if not the finest – example of Warhol’s small format Maos out there,” said Ralph Taylor, Senior Director for the Bonhams Post-War & Contemporary Art department. “It’s an absolute classic, brilliantly executed, with sterling provenance. Collectors who target the very best will find much to admire with this painting.”