Chiswick Auctions is to sell an ground-breaking book titled La Revolution Surrealiste, signed by key artists and advocates of the Surrealist movement and featuring a specially-commissioned cover and back. Amongst the signatures are those of Pablo Picasso, Andre Breton, Marcel DuChamp, Jacques Prevert, Rene Magritte, Andre Masson and Jacques Baron.

The rare book is estimated to fetch £3,000-£5,000 when offered in the auctioneer’s Printed Books and Manuscripts sale on Wednesday 20th July.

Dating back to 1924, the book is a manifesto of the Surrealist movement and contains essays and insights by various theorists into the values and manifestations of the movement, which explored the unconscious mind as a vehicle to tap into the imagination.

It once belonged to a Jacques B. Brunius (1906-1967), the French actor, novelist and film director, who appeared in more than 30 films, including The Lavender Hill Mob. Following a move to England, he worked for Michel Saint-Denis during World War Two, broadcasting on the BBC from London, as one of the voices of the Free French, he would go on to work for the BBC for over 30 years.

As well as being a film star and Director, Brunius was passionate about making literature available across national and linguistic boundaries. He was general correspondent for the French literary revue Fontaine, and a contributor of articles on cinema to La Revue du Cinéma and L’Ecran Français. 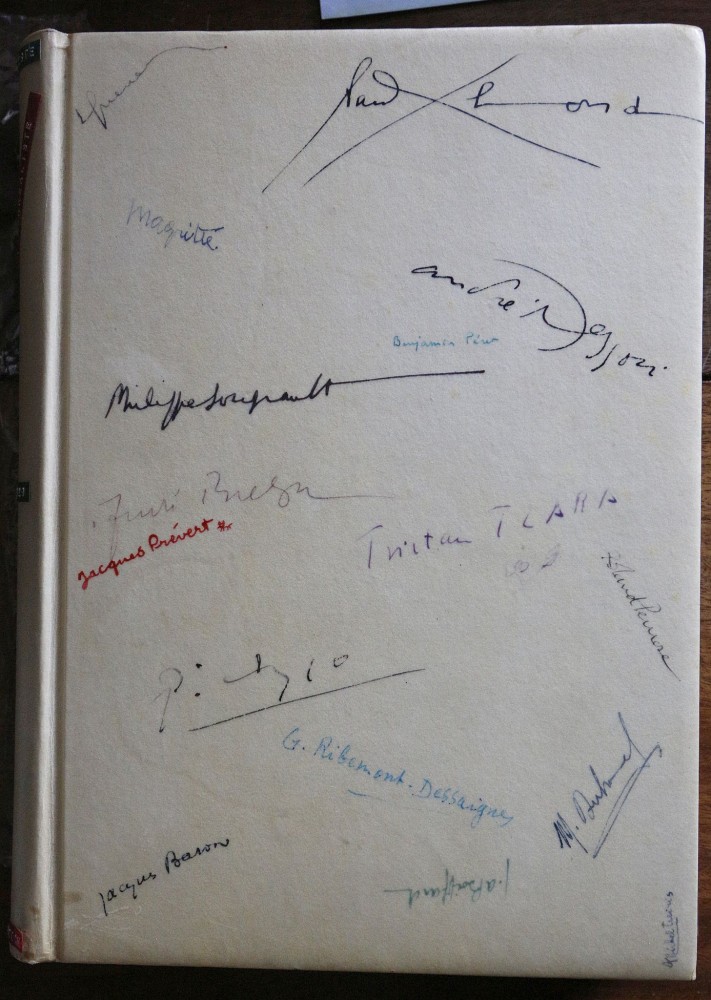 He was a known devotee of Surrealism and a member of the surrealist group in France and then in England, with his friends E.L.T. Mesens, Conroy Maddox, Ithell Colquhoun, Simon Watson Taylor and Roland Penrose. He took every opportunity to defend surrealism and participated in many radio shows debating the subject. Brunius knew many of the main Surrealist artists and theorists, which is how he attained the signatures on the book in the sale, from the likes of Magritte, DuChamp and Picasso.  In 1959, he undertook a vigorous defence of the poetic valour of nursery rhymes in defence of his Surrealist beliefs. The text was published under the title Language and Lore of Children by a John Lyle, a private book collector and bookseller, who also acquired Brunius’ book which is now in the auction.

La Revolution Surrealiste was amongst Brunius’ extensive library, which Lyle purchased following his sudden death in 1967. This acquisition transformed Lyle’s growing collection of modern editions, into an archive spanning more than seventy years of Surrealist literature.

Simon Nuckley specialist in Chiswick auctions Book department, said, “This is a wonderful opportunity to obtain a piece of historic property. To have a group of such significant signatures sitting together on the page and endorsing the publication of an important text in the Surrealist movement, truly is a slice of history.”