The passion and craftsmanship of jewellery throughout history will both be evident in the auction of jewellery and watches to be held by Mayfair auctioneers Dix Noonan Webb next month. 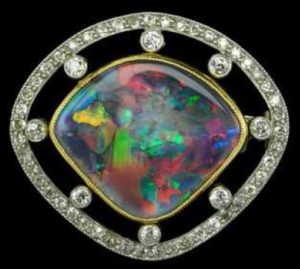 The sale will include rings from the Roman era, a collection of posy rings given as tokens of love, a trio of late 19th century Chinese gold bracelets, a fine Edwardian black opal and diamond brooch, a Breguet gentleman’s automatic calendar watch, a 6 carat diamond solitaire ring and a choker necklace made by the celebrated 1970’s British jeweller David Thomas.

“This sale ranges from very early Roman pieces right up to the present day, a snapshot of the history of jewellery,” says Frances Noble, head of the recently-formed Jewellery Department at Dix Noonan Webb, which is holding its second auction after a highly successful inaugural sale earlier this year. “We are delighted to be offering such a wide range of selected jewellery and watches, which we believe will appeal to a broad spectrum of buyers.”

Five posy rings form an interesting section of the sale. Popular from the 15th century through to the 18th century in England and France, posy rings were inscribed with short sentimental or religious inscriptions (‘posies’) for a loved one. Today they are very collectable, the rarer inscriptions and enamelled examples and those dating from the 15th and 16th centuries being particularly sought after. The earliest of the lots being auctioned at Dix Noonan Webb dates from the late 16th century and is inscribed on the outside with a cross and the words ‘BOVNDE BY FATHE’ (‘bound by faith’). It is expected to fetch £2,000 to £3,000. 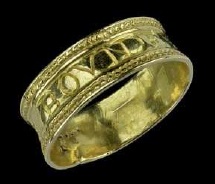 Another example for sale is an 18th century posy ring bearing the romantic inscription ‘My Love to thee Shall Constant be’ on the inside, with the maker’s mark ‘JG’, probably for the London goldsmith John Gamon, A further ring from the same period bears the posy ‘You never knew a heart [in the form of a heart shape] more true’. Both rings are estimated at £1000-1500. The auction also includes three Roman rings, one a child’s ring expected to sell for £200 to £300 and the other two being auctioned together at an estimate of £800 to £1,200.

One of the highlights of the sale is an early 20th century black opal and diamond brooch, the quarter-segment-shaped opal set within a surround of old brilliant-cut diamonds. This brooch, with its stunning play of colour in a fine period setting, is expected to sell for £3,000 to £5,000.

Equally stylish is an Art Deco sapphire and diamond pendant on a chain, the untreated Sri Lankan sapphire weighing approximately 14 carats, with the original purchase receipt from Abdul Caffoor & Co of Colombo, Ceylon, dated 1947. Caffoor was one of the leading jewellers in what was then called Ceylon and exhibited around the world, including at the British Empire Exhibition in London in 1924 where Queen Mary visited his pavilion and bought pieces. The pendant is estimated at £4,000 to £6,000 while a sapphire and diamond ring bought at the same time from Caffoor is expected to fetch up to £1,000.

A rare trio of late 19th century Chinese gold filigree bracelets, all in excellent condition and still in their original ivory fitted cases, are being offered for sale each with estimates in the region of £1500-2000.

A single-stone diamond ring, the diamond weighing 6.08 carats, is estimated at £18,000 to £22,000 and an 18ct two colour choker necklace set with amethyst and rock crystal, made by the acclaimed jeweller David Thomas and privately commissioned by the vendor in 1972, is estimated at £3,000 to £5,000.

The Watches section of the auction will include a fine Breguet 18ct gold gentleman’s Classique 3337 Moonphase Automatic Calendar watch dating from 1994, with glazed display back showing the ornate and richly decorated movement inside. It comes with its original green leather case, outer box and accompanying documentation, and is expected to sell for £6,000-8,000. A silver-cased ‘Atlas’ Goliath pocket watch on a Goliath chain is estimated at £700 to £900. These huge pocket watches are usually in silver plated cases and are rarely seen in silver ones.