It looks no more than a decorative piece of paper, but it is credited with bringing about the end of more than 2000 years of Imperial rule in China. 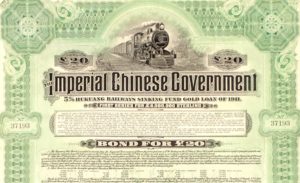 Now John Nicholson’s of Fernhurst will offer this Imperial Chinese Government Hukuang Railways bond along with five others at their September 2nd Fine Oriental Works of Art auction.

The bond’s date – 1911 – gives the first clue. It was the year that the Xinhai Revolution overthrew the last Chinese dynasty (the Qing), which had ruled since 1644, ushering in the Republic of China.

The bond’s purpose gets to the heart of the matter. Issued by a consortium of banks in London, Berlin, Paris and New York, it was one of many sold to finance the Hukuang Railway, giving foreign powers access and even control not just of China’s railroads themselves, but of the land around them.

The Hukuang Railways £6 million loan was the last in a long succession of foreign loans to the Imperial Chinese Government for railroad construction, finally tipping national resentment in China over the limit into an uprising, in part because of the crippling guarantees that the Chinese government pledged to secure them, but also because it disenfranchised rich and poor Chinese investors, who had backed an earlier scheme that had failed to get off the ground.

Nationalists fermented discord among the wider populace over the extent of control handed to foreign powers, leading to the Wuchang Uprising on October 10 and, subsequently, the abdication of the Emperor. 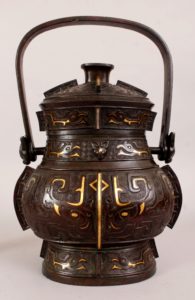 A fascinating piece of history then, this £20 gold loan bond, complete with attached coupons and authentication certificate, measuring a substantial 21½ x 14½in, comes as part of a collection of six Imperial & Republic Period Railways & Gold Bonds with an estimate of £500 – £700.